SACRAMENTO — Wednesday’s Celtics-Kings game was one Jayson Tatum had been eyeing for awhile.

To the newly minted 21-year-old, the annual visit to the Golden 1 Center represented more than just another regular-season tilt on the road. It was an opportunity to finally compete against one of his closest friends, Kings power forward Harry Giles III, at the NBA level.

“We’ve been talking about this for as long as I can remember, making the league and playing against each other,” Tatum told Boston.com after the Celtics hung on for a nail-biting 111-109 victory. “This is a dream come true for both of us.”

Giles, who received hearty cheers upon checking in during the opening quarter, said he and Tatum first shared the court when they were in fifth grade, but their friendship didn’t fully blossom until the summer before their sophomore year of high school. While playing for Team USA at the 2013 FIBA Americas U16 Championship in Uruguay, Giles suffered a devastating knee injury that sidelined him for the remainder of the competition — and sparked a connection.

Because he waited until July to undergo surgery, Giles remained with the team throughout his injury and said he was in Tatum’s room “the whole time.” At an age where scouts’ rankings, along with all the glory that comes with being a highly touted prospect, are front and center, Giles was thankful for Tatum’s unconditional support and companionship.

“He took the time to be with me when I was hurt,” Giles said. “That was big for me, knowing that somebody is genuinely there for you, because he was there for me when he could have been doing his own thing.”

From there, the two continued to stay in touch in high school — Tatum attended Chaminade near his hometown of St. Louis, while Giles went to Wesleyan Christian Academy in North Carolina before transferring to Virginia’s Oak Hill Academy — and continued to compete together for Team USA. Tatum said he was drawn to Giles due to the pair’s similar personalities and backgrounds. 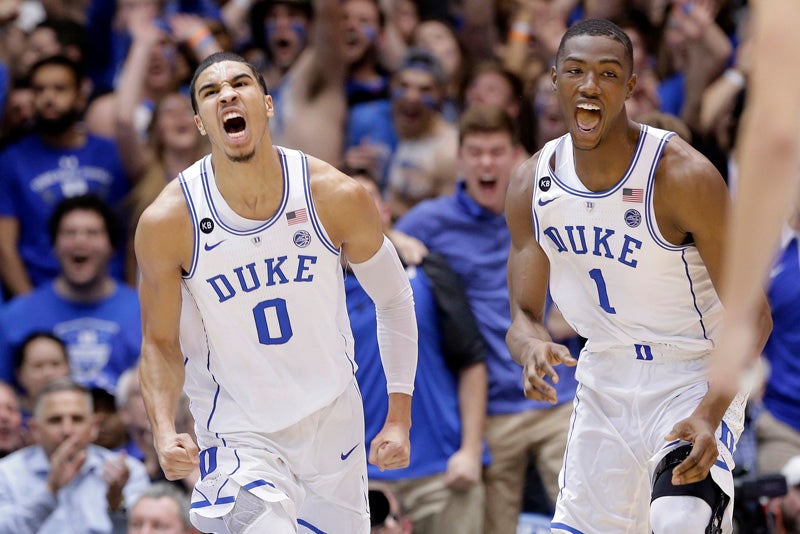 Jayson Tatum and Harry Giles react during a Duke victory over North Carolina in February 2017.

Both played one season of college basketball at Duke before getting drafted in 2017. While Tatum quickly established himself as a budding superstar his rookie season, Giles’s professional career was pushed back a year in order to, as the Kings announced at the time, “focus on more vigorous practice activity and individual workouts tailored to continue developing overall strength and aid ACL injury prevention.”

So, when the Celtics ventured out to Sacramento as part of a four-game road trip last March, Giles could only watch as Tatum put up 12 points and seven rebounds in a 104-93 win.

“It was good to see him play and just live out his dreams,” said Giles, who noted he was still able to ‘dap’ Tatum up during warmups last season. “We’re just there supporting each other, doing what best friends do.”

This year’s game undoubtedly carried much more significance for the two friends. Yes, the Celtics were looking to take another step in the right direction amid their inconsistent season, and yes, the Kings were looking to continue their unexpected playoff push. Regardless of the outcome, however, the night was going to be special.

“We’ve shared the court many times, but this was different,” Tatum said. “I think I was more excited because I’m just happy for him. Last year, he couldn’t play. Now, he’s getting the opportunity, and I’m super excited for him.”

Tatum finished with 24 points on 8-for-17 shooting, while Giles logged 21 minutes off the bench for 6 points, 4 rebounds, and a monster block.

After the final buzzer, the duo swapped jerseys on the court, with plans to meet up after the game.