The Boston Celtics’ elimination from the NBA playoffs on Wednesday officially started the clock ticking on Kyrie Irving rumors, reports and whispers and now one of the most intriguing possibilities a former teammate with whom he had an often frosty relationship.

That, of course, would be LeBron James. Only three years ago, Irving, James, and the Cleveland Cavaliers won an NBA championship, which Irving followed up with a bombshell trade request the next year to escape his teammate’s sizable shadow. But now ESPN’s Brian Windhorst, who has chronicled James throughout his career, is saying that Irving is open to the idea of joining James on the Los Angeles Lakers.

One key component, the hiring of Jason Kidd, is falling into place, although in a different way than Windhorst imagined. Kidd has been hired as the top assistant, according to ESPN, with Frank Vogel landing the head coaching position.

“I would’ve said that this is impossible for many months, but as time passes here and as the possibility exists that Jason Kidd could be hired as the Lakers coach, I think the possibility of Kyrie and LeBron reuniting – that door, which was deadbolted, has been un-deadbolted and has now been cracked open,” he said on ESPN radio. “It might even be opening more by the day. And I say that just because I think it’s on Kyrie’s radar, it’s on Kyrie’s board. He has had discussions with people about playing for the Lakers.”

Irving can opt out of his contract and become a free agent this summer, fueling speculation about possible landing spots. Two of those are in New York, with the Knicks — an oft-rumored spot for Kevin Durant — and the Brooklyn Nets.

But the idea that he could end up alongside James is intriguing. After the Cavs won the championship, it was clear that James might not be staying for long and Irving was quick to try to beat him to the exit with a trade demand that sent him to Boston. This year, he drew plenty of criticism as the Celtics lost in five games to the Milwaukee Bucks in the second round.

As long ago as January, there was an awareness on Irving’s part that being a leader isn’t easy and he rang up James after a victory over the Toronto Raptors to apologize. “I had to call ‘Bron, and tell him I apologize for being that young player that wanted everything at his fingertips,” Irving said. “I wanted to be the guy that led us to a championship. I wanted to be the leader. I wanted to be all that.”

Irving admitted that he had difficulty adjusting when James returned from the Miami Heat to a Cavs team that Irving was thinking was his. “He’s been in this situation, been there with me, where I’ve been the young guy, been the 22-year-old kid, wanting everything, wanting everything right now,” Irving said.

“The responsibility of being the best player in the world and leading a team is something that’s not meant for many people. And ‘Bron was one of those guys that came to Cleveland and tried to really show us what it’s like to win a championship. And it was hard for him. Sometimes getting the most out of the group is not the easiest thing in the world. Fewer are meant for it or chosen for it. And I felt like the best person to call was him.”

In L.A., James could use help. He was shut down with a groin injury as it became clear that the Lakers would miss the playoffs for the first time in his career. The team has tried and failed to get him help in the past, but didn’t land Paul George, Kawhi Leonard or Anthony Davis, enhancing Irving’s value. (Leonard and Davis will again be in play this summer.) But other teams might want Irving, too, including the Celtics.

“The way I viewed the situation is that I think a lot of people, because of Kyrie’s announcement at the beginning of the year, you know, thought that there was a marriage,” Celtics general manager Danny Ainge said in February, referencing a seeming promise from Irving before the season to return. “And I think that it’s more like an engagement. And we’re going to get married on July 1. And I think that that engagement is still on, as far as I know in my individual conversations with Kyrie, we’re still engaged. But we really can’t make those vows, sign that contract until July 1. We do have to wait until July 1 to finish any deal.”

After the Celtics were eliminated by the Bucks, Irving was asked for his takeaway from the series and he offered what many interpreted to be a hint about his plans. “Truth be told, it’s no time to be disappointed,” he said. “You take your lessons, the a** whooping they handed us, and you move on. … I know I won’t forget something like this. For me, it’s just moving on to the next thing, and seeing where that ends up.” 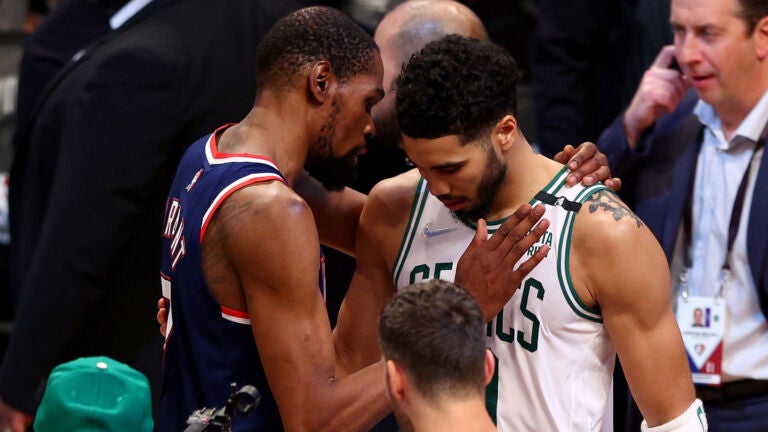