The Bruins suffered a shocking defeat at TD Garden on Tuesday, storming to a 4-0 lead before conceding four unanswered goals and going down on penalty shots in a 5-4 loss to the Panthers.

The Celtics play the Wizards tonight at TD Garden at 7:30 p.m. Boston is hoping to extend its winning streak to nine in a row.

Evansville is the 4th D-I men’s program to have its 1st-ever road win over an AP-ranked opponent come vs No. 1.

Also, UMass beat Northeastern on Tuesday in a game that included this highlight:

Jackie MacMullan and Paul Pierce discussed the Celtics’ new leadership: After losing on opening night, the Celtics have embarked on an eight-game winning streak. The team appears to have a different “vibe” this season in comparison to the underachievement of last season.

During an episode of ESPN’s “The Jump” on Tuesday, former Celtic Paul Pierce and longtime NBA reporter Jackie MacMullan touched on the difference in the team’s leadership.

Specifically, the departure of Kyrie Irving and the arrival of Kemba Walker.

“They got better leadership in there,” Pierce said. “Let’s just call it how it is.”

After ESPN reporter Rachel Nichols — the show’s host — offered a clarification that the leadership was simply “different,” Pierce jumped back in.

“It’s better,” reiterated Pierce. “Kemba, he’s known throughout the league as being a great leader. I mean, he played on losing teams, he stayed positive. He went out and played hard every night, and that can be infectious. That can be the difference between losing and winning and chemistry. That’s what he’s brought to the Celtics.”

MacMullan gave a specific example of the difference in attitudes between Irving and Walker.

“Kemba, when you miss a shot, you can hear him in the huddle when they mic him up saying, ‘keep shooting, keep shooting.’ When Gordon Hayward’s taking a shot and missing, Kyrie’s going, ‘What are you doing?’ So it is a different vibe.”

Trivia: Walter McCarty has a lot of history with Kentucky basketball, especially following Tuesday’s upset win. Yet he will still be beloved by longtime fans of the program, as his biggest accomplishment as a player for the Wildcats came in 1996 when he helped them win a National Championship. What team did Kentucky beat in the NCAA tournament final that year?

Could the Red Sox and Yankees make a blockbuster trade? Trades between two of baseball’s greatest rivals are rare and rarely inconsequential. The latest theory, covered by Pete Abraham of the Boston Globe, is that the Red Sox could broker a major trade with Yankees to solve a major problem on the horizon for Boston. Newly installed Red Sox chief baseball officer Chaim Bloom hasn’t exactly dismissed the idea either.

The lights briefly went out at TD Garden on Tuesday during the Bruins game:

The TD Garden lights are the real MVP on the Bruins’ penalty kill. pic.twitter.com/Pwys5Wplbo

Tuukka Rask made a Stanley Cup joke about it afterward:

Here’s Tuukka’s exact quote about the power failure in the second period tonight at TD Garden: “That should’ve happened in Game 7 of the finals, I guess.” He added that he’s never seen that happen before and called it weird.

Walter McCarty with Evansville players in the locker after the Kentucky upset:

evansville basketball is back pic.twitter.com/yT933bIZ8R

On this day: In 2008, Matt Cassel — playing for an injured Tom Brady — completed 30 passes for 400 yards against the Jets in a 31-34 overtime defeat. After falling behind 24-6 in the first half to a Brett Favre-led New York offense, Cassel rallied New England with several clutch throws.

The game in regulation came down to one play with eight seconds remaining. On fourth and one at the Jets’ 16-yard line, Cassel scrambled right before finding Randy Moss for the tying touchdown (coming against the coverage of former Patriot Ty Law).

Yet in overtime, the Jets won the coin toss and drove down field to kick the winning field goal. The Patriots would finish the 2008 season 11-5, but failed to make the playoffs due to a tiebreaker with the Dolphins.

Daily highlight: Before it all went bad for the Bruins on Tuesday, David Pastrnak scored a no-look goal. 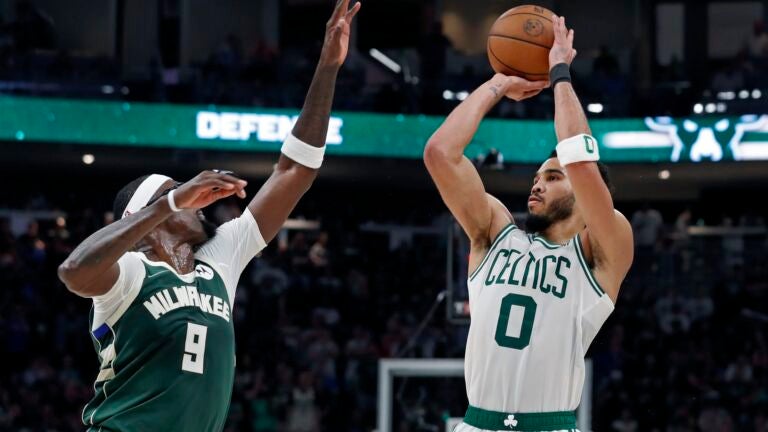