As New York natives and self-proclaimed “crazy Knicks fans,” the Safdie brothers originally wrote the script in 2010 for Amar’e Stoudemire, who spent four and a half seasons in blue and orange. At the behest of their agency, however, the brothers re-wrote the story three times for three different players, the last being Garnett.

“Around 2015, at one point, our agency was like, ‘Why don’t you cast up this part? Amar’e’s cool, but, like let’s get a bigger star here.'” Josh relayed Sunday evening following the movie’s premiere in Boston. “‘Kobe [Bryant] wants to act.'”

Bryant proved to be a difficult choice, given that he played for the Los Angeles Lakers and the story takes place in New York City. Still, Josh spent two weeks re-working the script — only to find out that Bryant was actually interested in directing, not acting.

The focus then shifted to Philadelphia 76ers center Joel Embiid. The hope was to create a contemporary film about an African basketball player with themes of reclamation and power, Josh said. (In the film, there is a rare Ethiopian opal that Garnett covets for its mystical charm and positive impact on his play.) But Embiid was eventually ruled out, too, when production carried over into the NBA season.

“We were back a square one, and we were looking at a list of recently retired players,” Josh said. “Kevin’s name was on there, and my Knicks fandom eclipsed my basketball intelligence. I was like, ‘I don’t want him anywhere near the movie.'”

Garnett ended up landing the role, playing himself as a member of the Celtics in the 2012 season. Embiid’s manager Jenny Sacks also appears in the movie, as Garnett’s manager.

“After meeting with some players and talking with them — no offense to any of those players — but you’re kind of like at some point, ‘OK, I met that person,'” Josh said. “With Kevin, we just didn’t want to get off the phone. We just wanted to keep talking with him because his personality is so infectious.”

“He’s one of the best storytellers ever,” added Benny. “He could tell you a story in 3D.”

Despite not being in the film’s original plans, Garnett was honored to have been chosen and took the job seriously. He said he noticed a crossover between cinema and basketball, citing the preparation process and desire to perform well.

“The least I could do is give them a Grade-A effort,” Garnett said. “I felt very compelled and a sense of responsibility to the character. I’m playing myself, like ‘Who can play Kevin Garnett other than me?'” 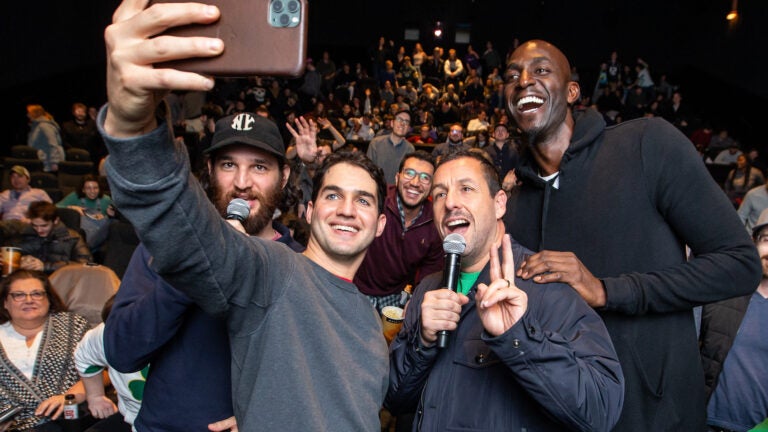