Once the chants started, they didn’t stop.

With the Celtics leading the Detroit Pistons by more than 20 points in the fourth quarter of Friday night’s game, all eyes turned to 7-foot-5 center — err… 7-foot-6, if you ask him — Tacko Fall. On a two-way contract, Fall had been recalled to the Celtics to bolster their frontcourt after both Robert Williams (left hip bone edema) and Vincent Poirier (right pinkie fracture) were ruled out for multiple weeks.

But Fall remained on the bench, prompting several reprises.

“We want Tacko!” they continued.

With six minutes to go, the crowd roared when Fall stood up. The moment, however, proved to be a false alarm, as Fall was just high-fiving point guard Kemba Walker, who had checked out of the game. A few seconds later, he stood up again — only to sit back down. The crowd let out a collective sigh.

A smirking Stevens motioned for the chants to get louder. He revealed after the game he was thinking about a pregame conversation he had with his family, who is typically in attendance but was out of town Friday evening. His son, Brady, asked how the team was going to handle Pistons big man Andre Drummond. His daughter, Kinsley, had an idea.

“She said, ‘It’s time to give the people what they want,'” Stevens said. “That’s all she said. I was laughing the whole time everybody was chanting because all I could think about was Kinsley leading the cheers.”

Then, he finally gave the people what they wanted. He gestured to the bench for Fall, who shot up out of his seat — with a friendly push from Jayson Tatum — and made his way to the scorer’s table. Fans erupted, reaching playoff volumes of loud.

“I knew it was coming,” Fall said after the game. “It was a matter of when.”

Brad Stevens revs up the crowd.

When Brad Wanamaker committed a foul with four and a half minutes to go, the stoppage of play was met with more cheers and whistles. Fall checked into the game, as the entire lower bowl — still nearly full in a blowout — stood up to watch his first regular-season home game action.

Fall made his third career NBA basket on a turnaround hook shot. He would make another on a cutting dunk with less than a minute remaining. Both buckets were naturally greeted with thunderous cheers. Fall finished with five points, two rebounds, two turnovers, a block, and an “M-V-P” chant.

Friday marked the fourth game of the season Fall has been active. (He made his debut against the New York Knicks in October.) With Williams and Poirier out for an extended period of time, he’ll likely remain in Boston through parts of January. Fall said he’s come “a long way” since signing with the team, initially on an Exhibit 10 deal, but noted he still has a long way to go, too.

“I feel like I have so much more potential,” Fall said. “I don’t want to be average. Just got to keep working.” 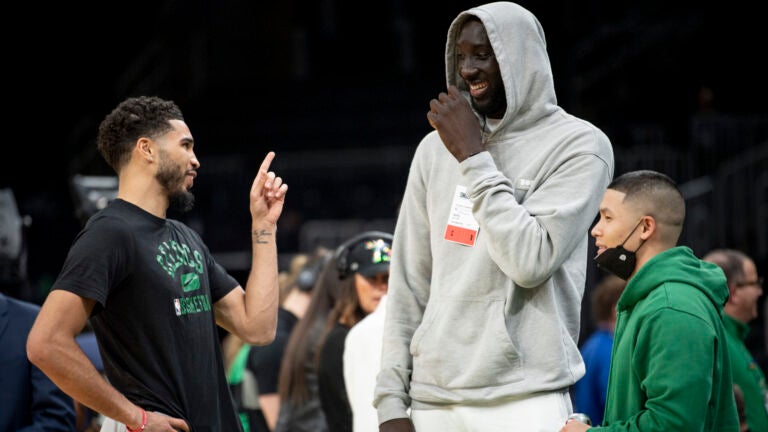 Tacko Fall sits courtside at Game 5, gives cushion to woman behind him