The Celtics have not started 2020 well.

After two lackluster wins against bottom dwellers of the Eastern Conference — the Atlanta Hawks and Chicago Bulls — they registered their first three-game losing streak of the season. From a professional Celtics fan’s perspective, here are seven takeaways from the stumbling week:

Starting point guard Kemba Walker missed three consecutive games (vs. Atlanta, @ Chicago, and @ Washington) with some sort of bubonic plague that has seemingly decimated the Celtics this season. (Jaylen Brown, Romeo Langford, and Marcus Smart have all also missed games with illnesses this season.)

As it turns out, Walker is an extremely important part of the Celtics. It’s wild it took us this long to figure that out. Walker has gotten a lot of praise for not being Kyrie Irving, but he probably isn’t getting enough recognition for the consistent and efficient offense he provides.

Walker is shooting 43.5 percent from the field and 39.7 percent from behind the arc. His ability to stop on a dime, especially coming off of screens, makes him virtually unguardable. Among all players that have played at least 25 games this season, Walker’s offensive rating (116.3) ranks third in the league. His usage rate is also a team-high 27.8.

In the three games Walker missed, Boston’s offense really struggled, shooting only 43 percent from the field and an abysmal 27 percent from three. Against the Hawks and Bulls, the Celtics were able to eventually muster enough to win the game, but their luck ran out against the Wizards’ pesky 2-3 zone.

Against the Philadelphia 76ers Thursday, Walker’s three-point efficiency was on full display. He tallied a team-high 26 points, knocking down 5 of his 11 three-point attempts. But his scoring came to a halt in the fourth quarter, when he made just one field goal, an and-1 on a floating bank shot. Smart was the only Celtic to make more than one field goal (he made two) during the final quarter, as the Sixers outscored the Celtics, 32-18, en route to a 109-98 win.

If the Celtics are going to beat tough teams, they are going to need someone in addition to Walker to be consistently excellent.

Referees, can throwers, and sometimes the Celtics are bad!

You may have heard Kemba was ejected from the game against the Spurs.

As a biased Celtics fan, I think LaMarcus Aldridge should have been called for an offensive foul, but I understand disagreements happen out there on the hardwood. I also understand sometimes players occasionally use profanity to express their displeasure with officiating. Clearly, Walker said something that warranted his first technical foul from rookie official Evan Scott.

Scott really goofed up, though, by calling a second technical no more than five seconds after the first tech, resulting in Walker’s first ejection of his nine-year NBA career. As Walker noted after the game, he is a two-time recipient of the league’s annual sportsmanship award and deserves more leeway in such circumstances. Scott displayed an absolute lack of situational awareness and should feel bad about doing his job poorly.

The young man who tossed his 20-ounce can of Truly Hard Seltzer onto the court from the balcony should also feel bad. Throwing things onto the court because you do not like the events of a sports match is pathetic and incredibly childish — I don’t care how many Trulys-deep you are.

He is very lucky his long-distance seltzer toss did not directly strike anyone on the Spurs’ bench, and he unquestionably deserves the lifetime ban he received from TD Garden. With that being said, I thought arresting and charging him with a crime was rather excessive. Generally, I believe we should be looking to divert individuals from the criminal justice system, not charge them with inane offenses like disturbing a public assembly.

The Celtics did not lose the game because Walker was ejected. Yes, they had just cut their deficit to seven. Yes, the three techs and additional personal foul led to four Spurs points on five free throws. But it is entirely too simplistic to blame the loss on the horrible decision-making of Evan Scott.

The Celtics lost to the Spurs because they played 42 minutes of terrible basketball. It wasn’t just bad execution by the Celtics, it was a general lack of effort. After the game, that was obvious to Brad Stevens, who said: “We didn’t play hard at the start of the game and that’s what got us beat.”

Danny Ainge said something similar on the radio the morning after the game: “The players just have to play harder. It’s that simple. It’s not harder any than that. You’ve got to show up to win. You can’t just show up to play. There’s a big difference between showing up to win a game and showing up to play a game.”

We all agree Walker’s ejection was the result of a horrendous call, but that doesn’t mean the Celtics also didn’t play uninspired basketball. Embrace the nuance, folks!

Leader Brad is not afraid to call out his team.

On the team’s flight to Philadelphia, Leader Brad must have seen something on film that genuinely irked him.

After the loss to the Spurs, he had called out his team’s effort — but only that in the prior two games. Before the game against the Sixers Thursday, his critique of the team’s effort extended back weeks! When asked about the struggles without Walker, Stevens mentioned he was concerned about the offense as a whole.

“I’m concerned with our lack of cutting,” he said, “and our lack of kind of high-motor offense in the past, really since Christmas Day game.”

What kind of cutting specifically?

“I mean, back cutting, cutting off screens, slipping screens, sprinting into screens, you know, not waltzing around like we did [Wednesday] night.”

I enjoyed the use of the word, “waltzing,” to describe lazy offensive basketball, but I was surprised to hear Stevens throw the Celtics under the bus for their past two weeks of games. Given that Stevens is an ultimate process-over-results guy, it was pretty damning to hear him publicly call out his team for not trying hard enough.

Even though the Celtics lost to the Sixers, I guess it was a good sign Stevens seemed generally pleased with the team’s effort.

“We couldn’t get stops in the start of the game, but clearly we were more locked in and played a lot better than we had before,” he said after the defeat. “So, I thought there were a lot more examples of who we want to be tonight than the last couple of games.”

Now that they’ve settled the effort thing, can they also stop the losing? Because that part is zero fun.

Losing to the Joel Embiid-less Sixers is incredibly frustrating. Thursday was probably one of Boston’s best chance to beat Philly, and the Celtics still couldn’t match the Sixers’ size.

Watching Enes Kanter struggle to stop Josh Richardson, or any serviceable guard, in the pick-and-roll is downright infuriating. Having to watch joke of a mascot Franklin the Dog traipse around the court, while Brown, Jayson Tatum, and Gordon Hayward combine for only 29 points is legitimately stomach-churning. At least Marcus Smart made five threes and Al Horford didn’t flex on us? I don’t know.

The Daniel Theis game-winning block against the Hawks was a good breakfast.

With the Hawks down two and under 10 seconds remaining, Trae Young — not one to be bashful about pulling from 30 feet — was looking to win a basketball game. But ol’ Danny Two Blocks had other ideas. Thank the Lord he did because can you imagine how angry we all would have been if the Celtics lost to the Hawks?!

Theis’s block was so badass that Stevens very much wanted to talk about it. (You can tell Stevens thinks something is important when he, unprompted, volunteers the information.) In response to a general question about the game, Stevens started gushing about the Theis’s play.

“I thought the best play of the fourth quarter was clearly Theis’s block,” Stevens said. “That’s a big-time basketball play. I mean, it sounds easy when we all sit here and talk about it, but in the throes of the game and knowing that Trae is capable of getting to the rim on anybody, that’s a huge, huge play.”

To make things even more fun, Smart came up with the ball off Theis’s block and proceeded to trample Young. Could he have avoided stepping on Young? Smart didn’t think so, and that’s good enough for me. I love him and I trust him.

Tremont Waters is ready for the NBA.

With Kemba out with the plague, Tremont Waters was active for three games. Waters is an exciting player who showed glimpses of his impressive vision, passing, and quick hands on defense during Summer League and the preseason.

The transition from the G-League to the NBA is understandably difficult, but Waters doesn’t see it that way. To him, it’s just another stepping stone on the path to his ultimate goal of playing in the league. I know that seems like one of the most cliché athlete-speak statements ever written, but with Waters, I believe it.

Waters came into the league with the reputation for an indefatigable ($5 word!) work ethic, but his confidence and approach to the game might be his most impressive attributes. He’s gotten only a few opportunities to prove himself in his short stint with the team, but he’s shown his confidence isn’t irrational. Stevens has also said he is plenty comfortable playing him, which is promising. Tremont is NBA ready.

I don’t know how Celtics.com reporter Marc D’Amico got roped into this brouhaha, but his presence makes me laugh. Kevin Durant is simultaneously one of the most and least relatable people in the NBA, but as long as he continues to get posts up, I will continue to respect him. Us online bois need to stay together. I don’t care for the Perk slander, but KD said no lies. 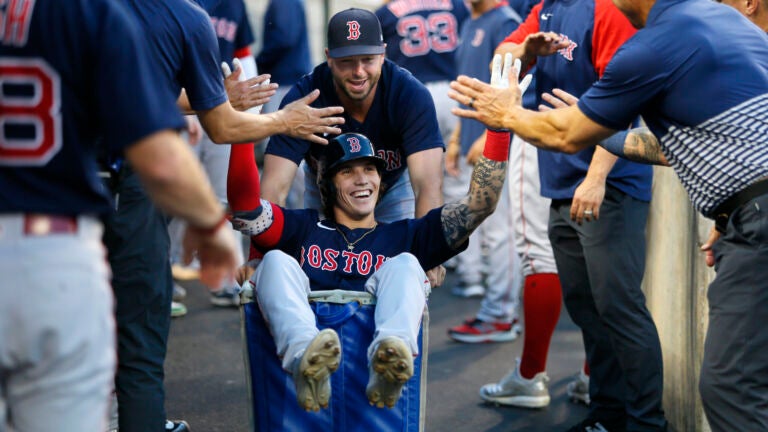