The Celtics forwent their typical pregame introductions Thursday night, instead using the time to honor Kobe Bryant with a 24-second moment of silence and touching tribute video.

The game against the Golden State Warriors was the Celtics’ first back at TD Garden since Bryant, his daughter Gianna, and seven others were killed Sunday in a helicopter crash in California. The Celtics listed the names of the nine victims on the center-court video board before asking the sellout crowd to hold the 24-second moment of silence.

During that time, the stairs throughout the arena were lit up in purple and gold; Bryant’s No. 8 and No. 24, as well as the Los Angeles Lakers logo, were displayed on multiple screens; and his No. 24 was also illuminated on the court using spotlights. The center-court video board started with No. 24 and then proceeded to count down, with photos of Bryant changing with each number.

The tribute video that followed commemorated a number of highlights from Bryant’s decorated 20-year NBA career, and also included photos of Bryant with current and former Celtics. Words, such as “icon,” “champion,” “friend,” and “inspiration,” displayed on the screen during the two-minute clip.

Upon the conclusion of the video, the screen panned to a few fans sporting Bryant’s jersey and others holding handmade signs in his honor.

While the Celtics were on the road, the exterior of the Garden was lit in purple and gold to memorialize Bryant. The escalators leading up to the fan entrance were also lined with purple lighting, a gesture that continued Thursday.

“Everybody is going to grieve and heal in their own ways, but I think the tributes and the people taking a moment to reflect is always the thing to do,” coach Brad Stevens said Thursday morning after shootaround. “I’m glad we’re doing that, I think it’s great.” 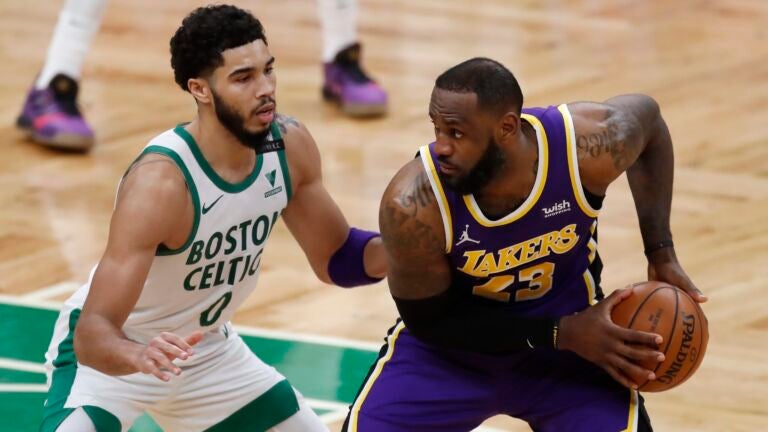