Marcus Smart made a patented Marcus Smart hustle play in the final seconds of the Celtics’ 112-107 victory over the Atlanta Hawks Friday night at TD Garden.

With the Celtics leading 110-107 with 18 seconds left, Smart chased after a loose ball bouncing toward the out of bounds line near the Hawks bench. His momentum took him airborne over a “Biofreeze” sign and into the second row of seats.

Luckily, Smart narrowly avoided a collision with a pediatric cancer patient as he tried to save the ball. Here’s the full play:

It’s late an I’m not sure how many people will to see this, but this needs to be highlighted. Marcus Smart dove for a loose ball & it took him out of bounds over a sideline sign. In this moment, up 3 trying save a possession, he recognized a pediatric cancer patient & avoided him pic.twitter.com/9D2ibAPQk0

Smart said he saw the young boy as he went for the ball, so he turned awkwardly to avoid him.

“I was trying to avoid the kid,” Smart said. “He was a cancer patient and looks like he just had surgery on his head. So the last thing I wanted to do was hit him. So that’s kind of why I turned awkwardly.”

Smart and the nearby fans were OK, but here’s a closer look from MassLive Celtics writer John Karalis that shows how close Smart was to colliding with two boys. It appears Smart shifted his body at the last moment and went between the two of them.

Here’s a closer look at just how close he came to hitting those kids and how he avoided it pic.twitter.com/pcyKtDnBkP

After the game, Smart gave his jersey and arm band to the fan.

Marcus Smart said he was OK after his tumble near the #Hawks bench chasing loose ball. Said he was more concerned about a cancer survivor he collided with. He was OK, too. Smart gave the fan his game jersey and arm band. #Celtics

In his first game back in the lineup following a two-game absence, Smart recorded nine points, six assists, and five rebounds as the Celtics won their sixth-straight game. 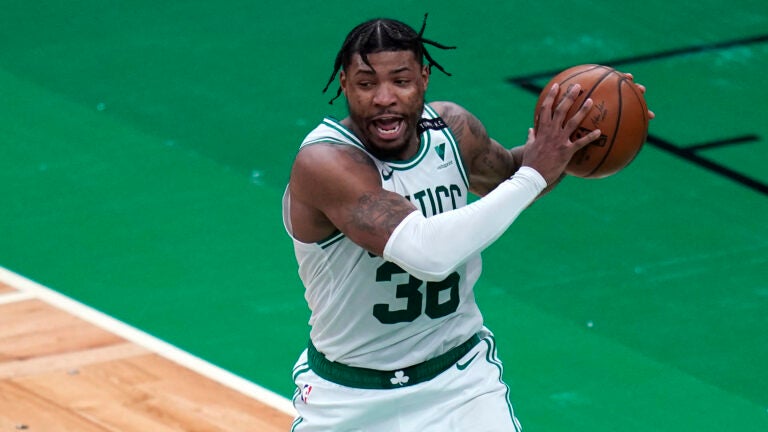