I’ll spare you the terrible Houston/NASA puns I’ve been haplessly workshopping in my walnut brain for the last 15 minutes and just leave it at this:

Tough one for the Celtics Tuesday night on the road against the Rockets, huh?

The Celtics led by 2 at halftime thanks to a 30-point second quarter against a Houston team now designed for a 6-foot-6-and-under league. But the Rockets dropped 69 points on the Celtics in the second half, finishing the game on a 20-4 run. James Harden and Russell Westbrook — the two least aesthetically pleasing stars in the NBA — combined for 78 points and 27 free throws.

It was ugly on the green side of the box score. Jayson Tatum’s stretch of 25-point games ended at five. He shot 5 of 15, including 0 for 7 from three. Kemba Walker picked up a technical and finished with a plus-minus of minus-24. And Marcus Smart fumed afterward about what he perceived as uneven officiating.

No doubt, it was a frustrating end to the Celtics’ seven-game winning streak.

Know what else it was? An aberration.

Perhaps it’s not ideal to write this now, after one of the Celtics’ more frustrating losses in recent weeks. Then again, they haven’t lost much in recent weeks — they’ve gone 10-2 since Jan. 20 — and one hiccup of a loss to a talented, annoying Rockets team doesn’t change this belief about them:

This team is really good. Better than any national NBA opinion-makers seem to realize. And maybe even better than those among us here in New England who rarely miss a minute recognize, too.

It’s time to recalibrate our expectations. The possibility is very real that they can get to the NBA Finals, and they have much more than a desperation-heave-at-the-buzzer’s chance of doing so.

We — meaning both the fans and media — spend a lot of words talking about what changed after last season’s gross ending against the Bucks. Al Horford took $109 million to move on from one dysfunctional team, the 2018-19 Celtics, to another, the 2019-20 Sixers. Kyrie Irving, a dazzling performer and an oblivious, nonsense-spewing detriment to team chemistry, bolted for Brooklyn. He was replaced by Kemba Walker, who has 95 percent of Irving’s skill and dazzle and is roughly 179 degrees his superior as a teammate. Ball-stoppers Marcus Morris and Terry Rozier found their jackpots elsewhere.

Entering the season, the roster looked less skilled but better constructed. Fifty wins and a top-four seed seemed like a reasonable goal.

Well, something else changed. We expected it, but it’s gone even better than expected, and happened at a more rapid pace. Tatum and Jaylen Brown made the leap to genuine stardom. And that’s changed everything, including what our postseason expectations should be.

Let’s start with Brown, who didn’t make the All-Star team in this, his fourth NBA season, but sure built a strong case. My appreciation for him grew last year when he publicly parried Irving’s finger-pointing while continuing to diligently improve as a player through all of the noise.

I didn’t expect him to improve this much between the end of last season and the start of this one, but that’s exactly what happened. He has worked relentlessly to tighten every aspect of his game — his ballhandling, his passing, his finishing at the rim, everything.

At age 23, Brown is averaging career highs in points (20.2), rebounds (6.4), and assists (2.2). Thank goodness the Celtics signed him to that contract extension in the preseason, because he’s become a max-deal player, and someone who might just be capable of being the second-best player on a championship-caliber team.

And the man capable of being the best player on a championship-caliber team is already here. At 21, Tatum has the pedigree — one-and-done college star, No. 3 pick in the draft but No. 1 in Danny Ainge’s heart, immediate success in the NBA, and now, improvement in Year 3 — to become a go-to force that opposing teams struggle to stop even though they know what is coming.

No, his rise hasn’t been linear. He developed some bad I-gotta-get-mine-now habits last season, and did not mesh well with Irving. But he acknowledged and corrected those flaws, while also clearly putting in the necessary time in the weight room.

He’s averaging 22.1 points, 6.9 rebounds, and 3.0 assists, all career bests. He’s also made huge improvements as a defender. The result is his first All-Star appearance — what should be the first of many.

Tatum is the alpha-dog scorer — not to mention a vastly improved defender — while Brown has become the do-it-all wingman. They are becoming the best-case scenario of what the Celtics hoped they would be when drafting them No. 3 overall in back-to-back years.

Given their maturity, obvious passion for the game, and rate of improvement, I can’t wait to see where they are in two years, or even one. But I’m not underestimating where they are now, either, or where they can help take the Celtics this spring.

The road out of the Eastern Conference is going to be a rocky one. The Bucks, winners of 46 of their 53 games, have a beautifully constructed roster around Giannis Antetokounmpo. The Raptors, who lead the Celtics by 2½ games for the second spot, are playing like the defending champions they are, even with Kawhi Leonard gone west. The Heat, who trail the Celtics by two games, acquired Andre Iguodala, a sign that they believe they must be reckoned with.

No, it won’t be easy. But the Celtics, even with their flaws, are good enough to get there.

Walker is a selfless All-Star, the perfect disinfectant for last year’s mess. Gordon Hayward is a star who takes on the obligations of a role player, and if you thought trading him for Andre Drummond was a good idea, I must assume hockey is your preferred winter sport. Cedric Maxwell compares Smart to his old friend and teammate Dennis Johnson, and that is both high praise and totally accurate.

But it’s the growth of the young guys — Tatum and Brown, Brown and Tatum — that gives the Celtics a real chance to emerge from the East.

It’s been 10 years since a Celtics-Lakers final, you know. I’m ready for another one. The Celtics might just be ready too. 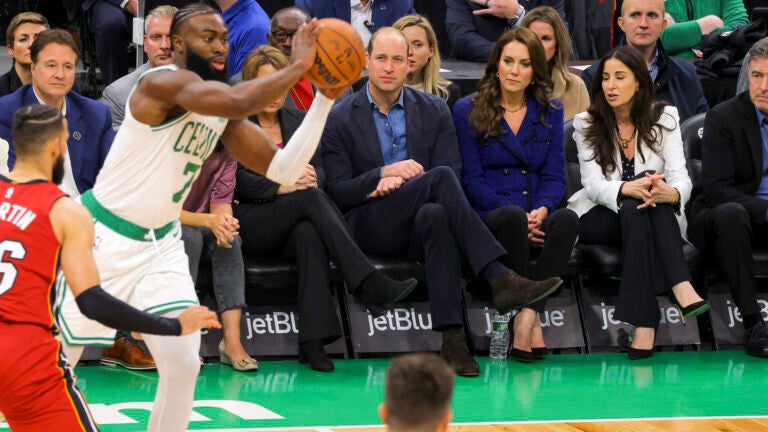