For the second time in as many nights, Northeastern defeated Boston University in double-overtime to win the Beanpot. On Tuesday, it was the women’s team’s turn (following the men’s victory on Monday), winning 4-3 thanks to a Lauren MacInnis power play goal.

A game for the ages. #HowlinHuskies win in double overtime with a power play goal by #2 Lauren MacInnis. pic.twitter.com/QPfArVTHoC

Also on Tuesday, the Celtics lost to the Rockets in Houston, 116-105. Gordon Hayward led Boston in scoring with 20 points.

Today, the Bruins host the Canadiens at TD Garden at 7:30 p.m.

Kendrick Perkins had some thoughts on Kyrie Irving: It’s been more than seven months since Kyrie Irving left the Celtics to sign with the Brooklyn Nets, yet his name keeps coming up.

In the middle of calling a Celtics-Rockets game in Houston on Tuesday for NBC Sports Boston, former center Kendrick Perkins offered some unprompted criticism of Irving.

The moment began with Perkins acknowledging the far-reaching Celtics fan base, which was vocal during the game in Houston.

“You know when I was playing for the Celtics, I never really focused on the crowd or the fans,” Perkins explained. “I was so locked in. Now that I’m an analyst and I’m retired, it’s amazing how many Celtics fans there are around the world. Do you hear these chants right now? ‘Let’s go, Celtics.'”

Then, after pausing, Perkins turned his attention to Irving.

“And Kyrie Irving didn’t want to play for this franchise,” Perkins offered. “Every time I think of that guy, I want to throw up.”

.@KendrickPerkins: “Kyrie Irving didn’t want to play for this franchise. Every time I think of that guy, I want to throw up.” pic.twitter.com/hlU7djJU7J

It’s not the first time Perkins has taken a tough line on Irving, who left Boston for Brooklyn in the Summer of 2019 as a free agent.

Even before Irving left the Celtics, Perkins said he’d “lost all respect” for the 27-year-old.

Lost all respect for Dude this year! ??‍♂️ https://t.co/OLDj3zAWkZ

Trivia: Can you name this person based on the clues:

At the annual “Kings & Queens of Corbet’s” on Tuesday, Jake Hopfinger threw a double backflip off the top of Corbet’s Couloir in Jackson Hole:

Just a couple of special assistants showing up to Red Sox spring training:

Former Celtic Marcus Morris got into it with Joel Embiid on Tuesday night:

Marcus Morris and Joel Embiid got into it ? pic.twitter.com/tYFwuqtlcG

On this day: In 1980, the United States men’s hockey team was trailing Sweden 2-1 with 41 seconds remaining in the third period. It was the team’s opening game of the Lake Placid Olympics. Technically, the Olympics hadn’t even begun, with the opening ceremonies occurring the next day, but the length of the hockey tournament dictated that games get underway earlier.

Down to his last roll of the dice, U.S. coach Herb Brooks pulled goalie Jim Craig and threw Scituate native Dave Silk on the ice as a sixth skater. After a frantic series in which defenseman Mike Ramsey barely managed to maintain possession of the puck and keep it in the zone, Mark Pavelich calmly played an opportune pass across the center of the ice.

Swooping in from the blue line, defenseman Bill Baker didn’t wait and struck a 40-foot slap shot that found the back of the net with 27 seconds to play. The host nation’s youth full team held on for a 2-2 tie, which felt like a victory following the dire circumstances of only a few minutes before.

“I have to say we were lucky,” admitted Brooks to John Powers of the Boston Globe. But as the U.S. would soon prove, they were just getting started in Lake Placid.

San Diego State is throwing down hammers and Bill Walton is just happy to be there ? pic.twitter.com/XRBK64w8rb 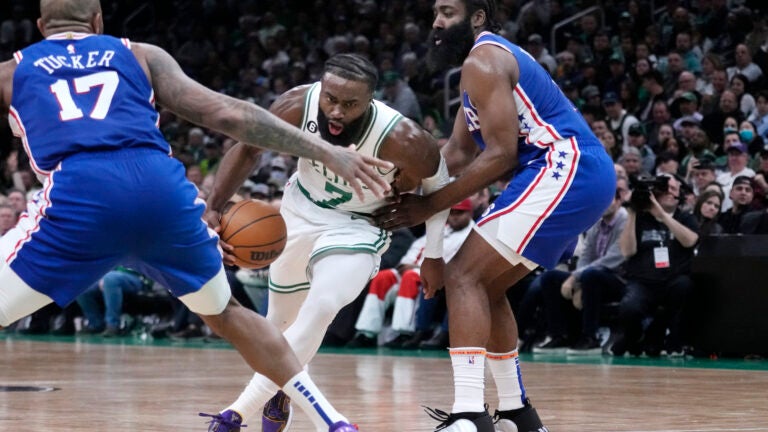 Report: Jaylen Brown leaves game with facial contusion, could be out through All-Star break