It was Doc Rivers who sent the first text.

Ten months after former Celtics center Kendrick Perkins was traded to the Oklahoma City Thunder in 2011, Rivers sent a message to Perkins and other members of his 2008 championship Celtics team, including Kevin Garnett, Paul Pierce, Tony Allen and, Rajon Rondo. It was Christmas Day, and up until this point, the relationship between Rivers and Perkins was rocky. Perkins felt like Rivers had been a “father-figure” to him, one that encouraged him on the court and held him accountable off of it, but now he had been traded. He and his former coach stopped talking for bit after that.

That is until Rivers broke the silence.

“Merry Christmas” he texted all them.

In a story published Wednesday, ESPN’s Jackie MacMullan reveals how Rivers’s text chain has helped keep members of the 2008 Celtics team connected over the past 12 years. Their group chat, which has survived trades and fallouts, still exists today and is where they all check in with one another, exchange jokes, and talk trash.

“It was nice to hear from Doc,” Perkins recalled to MacMullan of Rivers’s initial text. “And by reaching out like that, it just got everybody talking all sorts of noise. As usual, KG was the loudest. He said to me on that first text chain, ‘Don’t you start getting too comfortable in Oklahoma, Perk. You know where your real family is.'”

Families, MacMullan writes, often go through rough times. In the NBA, “everyone starts to go their own separate ways,” and this was the case when former Celtics shooting guard Ray Allen signed with the Miami Heat during free agency in 2012. The move deeply hurt his relationship with Garnett, Pierce and Rondo, and Garnett especially took offense to Allen’s decision. He even refused to shake hands with him when the two teams played each other during the season.

“The best part of that group, and, I guess, the worst part, too, was they’re just so competitive,” Rivers said of the tension between the group and Allen. “They felt very strongly, ‘You cannot leave this family. If you do, you’re an outcast. And, if you go to a rival, holy crap, you’re an extreme outcast.’ So that’s what happened with Ray…As the years went on, and we were all moving around in the NBA, those rules were still in play. If you made a move that affected the group, you had some explaining to do.”

“What is it now? It’s 2020, so you’re talking about nine years now and I’ve gotten so much hate, death threats, vitriol from Boston fans,” he said recently on The Cedric Maxwell Podcast. “Obviously these guys have kind of removed me from the ‘Big Three,’ said so many negative things about me, and I [haven’t] had one negative thing to say about any of them.”

While their group chat has not solved those issues (Allen is not in it), it has helped the relationship between Rivers and Rondo. MacMullan details that when the two were on the Celtics they would “butt heads,” but now Rivers texts Rondo more than any of his former players. Rondo even asks him for basketball insight on how to guard opponents, and when the Lakers faced the Clippers on Christmas Day this season, Rondo texted him before the game.

“He texted me on Christmas Day this year,” Rivers said. “I was going back and forth with him. I was laughing, telling him, ‘It’s great to hear from you, especially since we’re going to be trying to bash each other’s heads in about two hours from now.'”

With COVID-19 having postponed the NBA season, the group chat helps keep all of them virtually connected. They talk about their families, children, and 10 days ago, they even chatted about “restaurants and podcast ventures”. Garnett, Pierce, and Allen are the most “active texters,” while Rondo can be distant but chimes in “once a month” to ask how they are all doing.

“It’s the closest group I’ve ever been around,” Rivers said. “It’s amazing how often we all still reach out when something great happens or even when things don’t go very well.”

“That’s how we’ve stayed connected to the best part of our brotherhood that never died,” Perkins added. 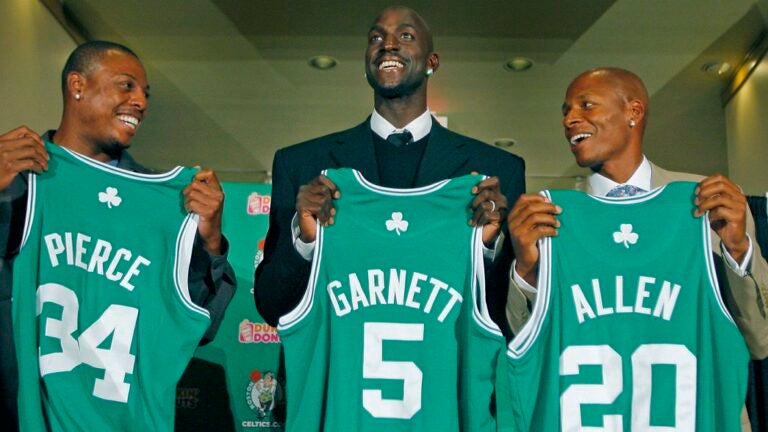