There’s a lot of joy to be found in the refreshing of sports memories.

Sure, we remember the feats of Larry Bird as vividly as possible for an athlete who played his last NBA game 28 years ago. YouTube clips can dish out an assist whenever Larry’s legend might dare begin to fade.

Larry, he will forever stay familiar in our minds. But re-watching all of these classic Celtics games in the absence of live sports right now restores more color and context to what we already remember or know to look up.

It’s a delight to see Bird’s virtuoso shot-making and geometric-genius passing again as the details of an old game unfold.

It’s a delight, too, to be reminded that Robert Parish was a quiet storm, Kevin McHale deployed post moves that laughed in the face of a double team, and Reggie Lewis was … well, he was just so good, and it still hurts to watch him and think of what should have been.

And sometimes, you’re reacquainted with someone almost forgotten, and yet so worthy of being remembered well.

Do you remember Derek Smith? I hope you do, because he deserves it. And if you don’t, I hope this helps explain why you should.

I heard from a few of you asking about Smith after NBC Sports Boston’s re-airing of the decisive Game 5 of the 1991 playoff series between the Celtics and the Pacers.

That is truly a classic game — Bird bangs his head on the court so hard late in the second quarter that play-by-play broadcaster Marv Albert later said it made the kind of thud he’d heard previously only at boxing matches.

Larry, being Larry, returned in the third quarter and lit up the Pacers, including trash-talking sharpshooter Chuck Person, who pretended to be Bird’s rival, with a tour de force performance as the Celtics pulled away.

Bird was the conqueror that day, but he had an unlikely sidekick. Smith, who played just 12 games for the Celtics that year — two in the regular-season and 10 in the playoffs — scored 12 points, locked down Person in the second half, was on the receiving end of a couple of lovely Bird assists, and got a huge hug and an enormous ovation from the Garden fans when he checked out in the final inconsequential moments. 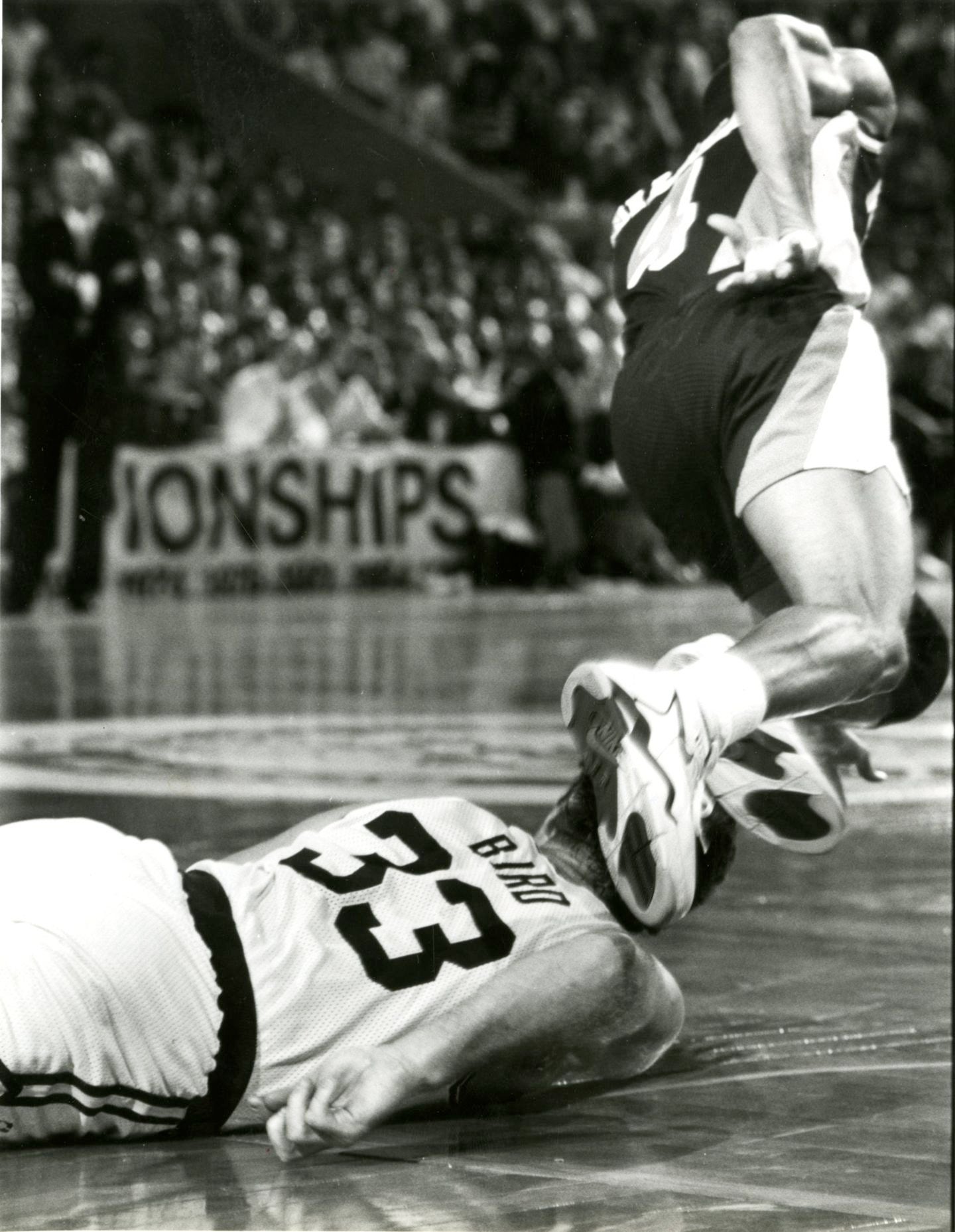 Larry Bird hit his head on the parquet floor in that memorable playoff win over the Pacers.

If you didn’t know better, you might have thought he was a Celtics legend based on his reception that day.

But he was not. He’s a what-if in NBA lore, and few of you, re-watching this game, did not remember him.

That’s understandable — he never played for the Celtics or in the NBA again after that postseason. A once extremely promising career — one that saw him win the praise of a youngster named Michael Jordan — was derailed by a severe knee injury in 1985 while he was with the Clippers.

Smith bounced from Sacramento to Philadelphia, his knee never recovering fully, until he ricocheted to the Celtics in December 1990 at age 29, in the hopes he could catch lightning in a bottle and do precisely what he did during that one satisfying flashback against the Pacers: Hold up long enough to have a meaningful impact in the playoffs.

There should have been so much more to his story, but an even harsher cruelty intervened. Five years after this game, while on a cruise with his family (including a son, Nolan, who would go on to play at Duke and briefly in the NBA), he died of a heart attack at 34 years old.

ESPN’s Michael Wilbon, then at The Washington Post, wrote a lovely column about Smith —who was on the Bullets’ coaching staff at the time of his passing — in the days after his death.

“Derek Smith’s voice usually sounded just like your conscience,’’ wrote Wilbon for the July 11, 1996 editions. “Eat properly. Get your rest. Be a better listener, a better communicator. Work harder. Be tougher. Play smarter. Sacrifice. His world was professional basketball, so it sounded like a basketball conscience. But it was also the voice of a husband and doting father. It was a voice you had to be behind the scenes to hear because Smith was an assistant coach, a lieutenant, for the most part unnoticed by the camera and the crowd. But it was a young voice, one with old-fashioned values, but fresh ideas about implementing them. It was a prepared voice, a strong, no-nonsense one. You would have grown to like it, to respect it in time because it was growing in stature and respect, except that we will never have that pleasure because Derek Smith is dead. At 34.”

That column always stuck with me; for years, I kept it with other sports writing clips that affected me in some way in a manila folder long since lost. I called Wilbon recently to ask him what he remembered about Smith, hoping his feelings and recollections hadn’t faded in the years Smith has been gone. They had not.

Smith’s old teammates from his too-brief peak as a Clipper remember what was, if terribly, tauntingly briefly, and what could have been. “Oh, he was special,’’ said Cedric Maxwell, a teammate on the 1985-86 Clippers. “Huge hands, great touch around the hoop, could power through people bigger than him, and he was absolutely fearless. He was one of my guys, a hell of a person and player.”

Marques Johnson, the great UCLA and Bucks star who was also his teammate with the Clippers, offered a remembrance via Twitter.

Played with Derek when we were Clippers and he averaged 27ppg or so to start the season. Huge hands and feet, he worked super hard on skill development. Our early season matchup vs the Bulls and MJ was a classic battle. Tragic loss when he passed. Terrific teammate and dude.
RIP

In 1984-85, Smith averaged 22 points per game while shooting 53 percent from the field. That included a game in November 1984 in which he scored 33 points on 12-of-17 shooting against a certain Chicago Bulls rookie. The next season, Smith was off to an even better start, averaging 27.1 points per game through his first nine games, and earning this praise from Jordan after their second career duel in October 1985.

“Derek Smith is the most underrated player in the NBA,’’ Jordan told the Los Angeles Times. “I predict he’ll make the All-Star team this year. He’s got all the tools to be a great player, except for one.”

Jordan was asked what Smith was missing.

“He doesn’t have any media attention,” Jordan said.

Just five games after winning another showdown with Jordan and earning his praise, his career came crashing to the court during a November game against the Sonics. On a late-game drive to the hoop, Smith collapsed to the floor, clutching his left knee and screaming in pain. He had suffered severely damaged cartilage that required removal. He later described the injury as a “firecracker going off.”

The knee was never right again. He was rehabilitating from yet another surgery years later when the Celtics signed him in December 1990, coveting his toughness and veteran presence. “He would be a very good pickup for the Celtics,’’ said Charles Barkley, his teammate with the Sixers for two years. “Give them credit. He would be a good pickup for anybody.”

Smith played just two regular season games for the Celtics, and expressed frustration after the first because he didn’t believe he was ready to return. But on that night against the Pacers, with Chuck Person flapping his gums and drilling long 3s and the season hanging in the balance, Smith gave the Celtics everything he had, and everything they needed. He scored 12 points in a season-high 22 minutes, grabbed a pair of rebounds, and used five fouls, most of them deployed to frustrate Person. It did not escape the notice of Bird.

“Bird wouldn’t stop talking about Smith, wouldn’t stop high-fiving him or hugging him,” wrote Wilbon upon the occasion of Smith’s passing. “… And afterward, Smith summed up his basketball odyssey about as eloquently as possible. Asked about his role in the twilight of his career, Smith said: ‘There was a time when I couldn’t guard a soul and I got paid to score 22 points a game. Now, I can only find the basket when I’m left totally alone. Larry found me creeping around there a couple of times … It’s another chapter.”

Said Wilbon this week: “Guys like Larry and Magic [Johnson], they would just cling to guys like him. Because he was mature enough to have all of the old-school stuff without being old. He had the makeup that they wanted. You could see why Larry and the guys in that group would have loved him. He kind of had Celtic written all over him.”

Smith’s moment in the Garden sun was fleeting. The Celtics lost in the next round to the Pistons, and Smith did not play in the clinching Game 6. He hoped to return the next season (“He is yet to see the real Derek Smith,’’ he said of coach Chris Ford), but the knee would not cooperate, and on Nov. 7, 1991, the Celtics ended the suspense when they signed veteran guard Rickey Green to fill his roster spot.

“It was a fun, fun experience for me, and I wish it had lasted longer,’’ said Smith, who never played another NBA game. “But I think I helped them be a better playoff team.”

He helped more than that. Derek Smith, improbably perhaps to everyone but himself, helped them win perhaps the most memorable playoff series of Bird’s late career.

For one night, it was as if he’d been a Celtic for life.

Watching him again, 29 years after that special game and 24 years after his death, I’m going to do my best to remember him as if he was. 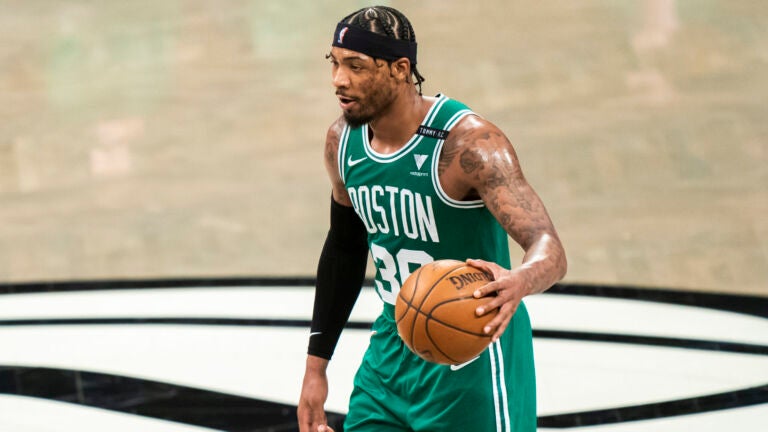