Celtics forward Jaylen Brown says he drove over 15 hours from Boston to Atlanta in order to lead a peaceful protest in his home state following the recent death of George Floyd, a 46-year-old Black man who pleaded he couldn’t breathe while a Minnesota police officer knelt on his neck.

“It’s a peaceful protest,” Brown said Saturday evening in an Instagram video. “Being a celebrity, being an NBA player don’t exclude me from no conversation at all. First and foremost, I’m a Black man and I’m a member of this community, and I grew up on this soil. I want to say that first and foremost.”

In the wake of Floyd’s death, a number of protests and demonstrations have taken place across the country in an effort to decry police brutality.

Brown publicized his plans earlier in the day, encouraging people to join him on his walk through the city. Among those who showed were two fellow Georgia natives in Indiana Pacers guard Malcolm Brogdon and rapper Lil Yachty. Both Brogdon and Brown are vice presidents of the National Basketball Players Association.

Brown, who carried a sign that read, “I CAN’T BREATHE,” said the purpose of the peaceful protest was to “raise awareness about some of the injustices” affecting Black men and women. He also has been actively expressing his thoughts via Twitter, writing Friday, “There are no more cheeks to turn.”

“Our voices need to be heard,” Brown said. “I’m 23 years old. I don’t know all the answers. But I feel how everybody else is feeling. For sure. No question.”

As the group marched, Brown used a megaphone to lead a call-and-response chant. “No justice,” he shouted. “No peace,” the crowd responded.

“It doesn’t make any sense to me,” he said. “As I sat home, and I’m trying to make it add up, as to why we have to go through breaking windows, demolishing our — all this is ours. We may not own it, but we live here. We’re raising our families here and we’re building up our lives here. It’s unfortunate we got to do this, just to show our frustration. We shouldn’t take that.”

“We got to keep pushing forward,” he said. “Jaylen, man, has led this charge. I’m proud of him. We need more leaders.”

Brown had been spending the NBA shutdown in Boston, training with his 78-year-old grandfather. The Celtics announced on Friday that their practice facility will open for voluntary workouts starting on June 1. 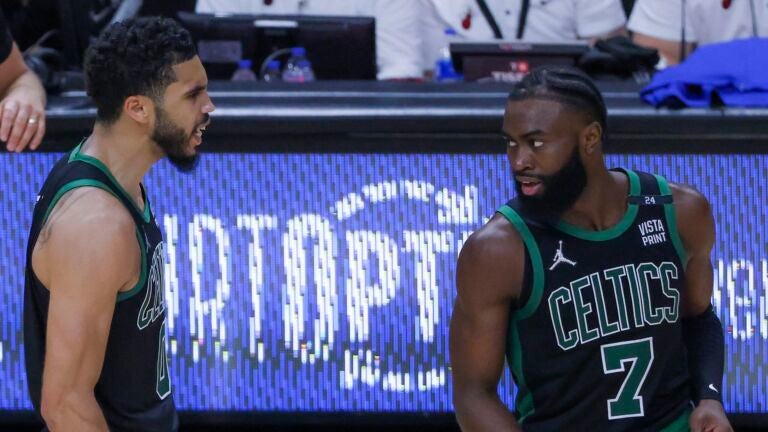