When Bill Russell saluted NBA players Wednesday for “standing up for what is right,” his words carried extra weight.

Not just because Russell, 86, is the NBA’s greatest winner, and arguably its greatest player. And not just because he has been a civil rights activist for as long as he’s been a sports icon.

Russell also happens to know a thing or two about staging an NBA boycott, as the Milwaukee Bucks did Wednesday in refusing to play in a postseason game to protest racial injustice in the wake of the shooting of Jacob Blake. As a result, the NBA decided to postpone all three of its Wednesday playoff games, and several teams and athletes in other sports also ended up choosing not to play.

Nearly 60 years earlier, Russell was the one pulling himself out of an NBA game as a demonstration against racist behavior. His Black teammates on the Boston Celtics followed suit, as did Black players for their opponent, the St. Louis Hawks.

The fact that the game went ahead anyway, with all the White players suiting up, was one of the ways in which the 1961 scene in Lexington, Ky., differed from what occurred Wednesday at the NBA’s “bubble” near Orlando. In addition, the game Russell and others pulled out of was a preseason exhibition, not a playoff contest.

However, it’s likely that NBA players today would have no trouble finding common ground with a sentiment Russell expressed at the time: “I am coming to the realization that we are accepted as entertainers, but that we are not accepted as people in some places.”

In the case of the 1961-62 Celtics, one of those places – but hardly the only one – was Lexington, where Boston’s Frank Ramsey and St. Louis’s Cliff Hagan had been all-American teammates at the University of Kentucky. At the time, the NBA needed to drum up local interest wherever it could find it, but not all the Celtics and Hawks players would find the welcome enjoyed by Ramsey and Hagan, both White (the Wildcats infamously took until 1969 to incorporate a Black player under former coach Adolph Rupp).

Two Boston players and future Basketball Hall of Fame members, Sam Jones and Thomas “Satch” Sanders, were refused service in the coffee shop at their team hotel in Lexington. “We had gone downstairs to eat, and they said, ‘Well, we really can’t serve you people,’ ” Sanders said in 2018.

Russell led the infuriated pair and K.C. Jones, another Black player and future Hall of Famer, to the room occupied by legendary Celtics coach Red Auerbach. Upon hearing that they intended to take the next flight back to Boston, Auerbach asked that the players reconsider, asserting that the seats were already sold and the game would be played.

Russell, who by then had helped Boston to four of its 11 championships with him, would not be swayed. Instead, he made it clear that it was better for him and his Black teammates to walk away, and leave Lexington with the nonintegrated game its denizens apparently preferred.

“I told Red we were leaving,” Russell recalled in 2013. “I said it was because it was important to me that everybody, everywhere, knows that the Black players are deciding they’ll stand up for themselves.”

A fifth Black player for the Celtics, then-rookie Al Butler, left with them, and two Black players for the Hawks joined the boycott. One of those St. Louis players was Cleo Hill, a first-round pick earlier that year who was also denied service in Lexington. He earned the wrath of the Hawks’ owner, was subsequently ostracized by Hagan and other White teammates and – in something of a foreshadowing of the fate that would befall Colin Kaepernick – he was out of the NBA after that season.

By contrast, Celtics owner Walter Brown told Auerbach that the game should not have been played at all and vowed to “never to subject my players to that embarrassment again.” Ramsey also declared his “100%” support for Russell and the other Black players.

“No thinking person in Kentucky is a segregationist,” Ramsey said then. “I can’t tell you how sorry I am as a human being, as a friend of the players involved and as a resident of Kentucky for the embarrassment of this incident.”

However, the team’s biggest star at the time, Bob Cousy, did not say anything about the episode. Despite his friendship with Russell, he never thought to reach out to the center about the racist treatment Cousy saw Russell receive in Lexington, Boston, St. Louis and so many other places the Celtics visited. Many years later, he would send Russell a copy of Ta-Nehisi Coates’s “Between the World and Me” with a note that Cousy said amounted to a “mea culpa.”

“Looking back on it, I should have done more to share your pain,” Cousy said in 2018 of his note to Russell. “I’m sorry I didn’t.”

Not that Cousy’s former teammate, a towering figure in so many ways, really needed anyone to speak up for him.

A day after the 1961 boycott, Russell told reporters: “We’ve got to show our disapproval of this kind of treatment or else the status quo will prevail. We have the same rights and privileges as anyone else and deserve to be treated accordingly. I hope we never have to go through this abuse again.”

“But if it happens,” he continued, “we won’t hesitate to take the same action again.”

Nearly 60 years later, Russell saw NBA players take similar action, for similar reasons. The Bucks’ protest was the culmination of days-long expressions of anger by NBA players over the shooting of Blake, who took seven close-range bullets to his back from a Wisconsin police officer.

“F THE GAMES AND PLAYOFFS!!!” Utah Jazz star Donovan Mitchell exclaimed in all-caps Monday on Twitter. “THIS IS SICK AND IS A REAL PROBLEM WE DEMAND JUSTICE! ITS CRAZY I DONT HAVE ANY WORDS BUT WTF MAN! THIS IS WHY WE DONT FEEL SAFE!!!!”

“Amen!” Russell replied to him then. “This has to stop!”

On Wednesday, Russell said on Twitter that he was “moved” by what he saw developing in the NBA bubble. He also thanked TNT analyst Kenny Smith, a former NBA player, for walking off the set that evening in solidarity with the Bucks and others.

“I am so proud of you,” Russell told Smith. “Keep getting in good trouble.” 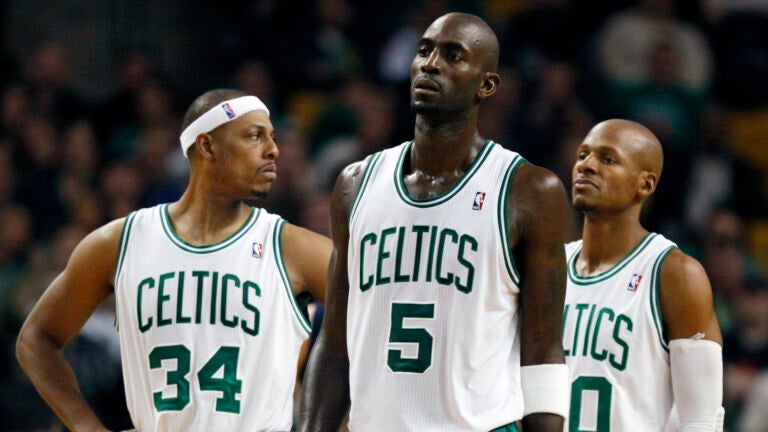