The Celtics had a chance to make the Eastern Conference Finals a best-of-3 series after losing the first two games.

Instead, their backs are up against the wall.

The Heat played a cleaner game than the Celtics in Game 4 to take a 3-1 series lead.

The Celtics, who outscored the Heat by double digits in the first halves of Games 2 and 3, were sloppy from the get-go. Boston committed 11 turnovers in the opening 24 minutes, causing them to have their lowest first-half point total of the playoffs, and trailed the Heat 50-44 at halftime.

“I thought our first half we looked, for whatever reason, we didn’t look crisp,” Celtics head coach Brad Stevens told reporters after the game. “And obviously that showed itself in our shooting numbers. I thought we were lucky to be at 50-44 at halftime, to be candid.

“For whatever reason, our first half wasn’t as good as it’s been.”

Jayson Tatum failed to score in the first half, missing all six shots he took and failed to make it to the free throw line.

“I wasn’t aggressive enough,” Tatum said of his first half performance. “I didn’t score in the first half, that’s unacceptable. I know I have to play better. That’s what I’ll try to do.”

The third quarter of Game 4 was kinder to the Celtics than most of the third quarters have been this postseason. They outscored the Heat 32-27 and committed just one turnover over the 12 minutes.

Tatum also got on the board in a big way. He scored 16 points to help bring the Celtics within one point heading into the fourth quarter.

However, the fourth quarter brought much of the same struggles the first half did.

The Celtics committed five turnovers in the first five minutes of the fourth quarter, causing them to only hold the lead for 16 seconds for the remainder of the game. They ended up committing 19 turnovers for the game to the Heat’s eight.

Stevens credited the hands of Jimmy Butler and Andre Iguodala, who combined for four steals in Game 4, for slowing down the Celtics’ offense.

“They turned us over in the fourth quarter,” Stevens said. “Those were huge plays against the zone. A couple of times I thought we just tried to slip through small seams. Jimmy just read the pass. He’s done it all playoffs. He’s done it against us, he’s done it against others. It’s easy for me to say ‘Be tough with the ball and be stroong with the ball.’ But those are tough with their hands when you put Iguodala and Jimmy at the top of that zone.

While the Celtics couldn’t hold on to the ball on offense, they allowed the Heat – specifically Tyler Herro – to get what they wanted on the other end.

Herro scored 17 of his game-high 37 points in the fourth quarter, going 6-for-9 from the field. His fourth-quarter points were nearly half of the 35 points the Heat scored in the final frame.

Stevens said the Heat’s screening was key to their offensive explosion in the fourth quarter.

“They do a really good job of trying to set those screens,” Stevens said. “A lot of times you want to blitz or switch. They do a good job of getting out of the switches or setting the switches low, specifically on those handbacks, the minute you jump it, he fakes it. It puts you in a real bind.

“Herro’s shotmaking tonight, in addition to the things we talked about that were our own issues, was the difference in the game. Jimmy was great late. Adebayo was his typical self. Dragic made some great plays. But Herro was ridiculously good tonight. The rim must have looked like the ocean to him.”

Celtics swingman Jaylen Brown blamed himself for not being aggressive enough on defense in Game 4.

“It’s tough to beat a team when they’re making shots and they’re comfortable. We’ve got to set the tone better from the start, and a lot of that’s on me.”

Tatum helped keep the Celtics alive towards the end of Game 4. He scored 12 more points in the fourth quarter to give him a team-high 28 points.

Despite a strong finish, he still lamented his first half performance.

“It’s tough,” Tatum said. “Honestly, they played better than us in the first half. In the second half we picked it up, but they were already in a rhythm and feeling good about themselves. There’s a number of guys over there that made good plays. It’s tough to come back from.

“We’ve to play a complete game,” Tatum later added. “It’s win or go home time. I wish I played like that from the start. I take a lot of blame. I didn’t play like myself in the first half. So I’ve got to be better.”

The Celtics now face elimination for the second time these playoffs and in order to move on, they’ll have to win three straight games.

The common sentiment between Stevens and Tatum was that the Celtics have to take it “One game at a time.” Brown remains optimistic that they can comeback from a 3-1 deficit, something that’s been done just 13 times in NBA history. 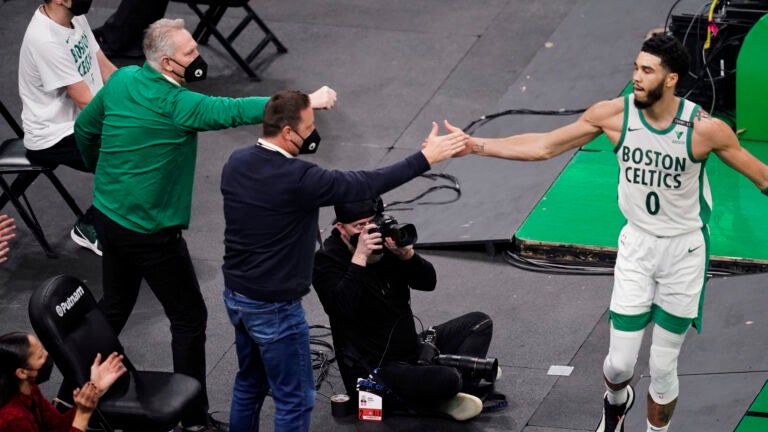