After a 112-109 loss in Game 4 of the Eastern Conference Finals, the Celtics — trailing the Heat 3-1 in the series — are on the brink of playoff elimination.

It was a mistake-filled performance from Boston on Wednesday, with 19 turnovers to Miami’s eight. It was also a night in which Heat rookie Tyler Herro torched the Celtics defense for a career high 37 points.

“Not even a little bit,” Ainge responded during an interview with 98.5 The Sports Hub’s “Toucher & Rich” on Thursday. “Last night, we had so many good stretches in the course of the game, you can see that our players are prepared. It’s just being able to sustain it. The turnovers, there were so many of them that were just unforced turnovers. And so that is frustrating. I’ve always been a person that has taken blame as a player.

“I’ve coached in the NBA and understand how hard coaching is,” Ainge continued. “I’ve sat on the bench watching one of my players shoot free throws, and thinking, ‘If he makes these free throws I’m a great coach and if he misses I’m a terrible coach,’ and it’s just obviously not the way. That’s just the way that we look at it sometimes. If we had squeaked out a win last night we don’t question anything, but when you lose by three points you question everything.”

Stevens has been the Celtics’ coach since 2013, when he was brought in to replace Doc Rivers and help lead the team’s rebuilding effort.

Ainge, who hired Stevens, remains an adamant supporter of the former Butler coach.

“I know Brad is the first one to take responsibility and accountability for us not playing well,” said Ainge. “He got the least amount of sleep as anybody last night.”

Looking for a possible explanation for the Celtics’ turnover issues, Ainge had two theories.

“I think that the zone defense has been challenging for us at times,” Ainge said of Miami’s defensive scheme. “I think we’ve gotten a lot of great shots, we [haven’t] been able to knock them down. We had, in the first half last night, so many wide open shots that we normally make. I don’t know if our guys are at the stage of their career where they can continue to play with the same force defensively, and focus when things aren’t going their way. A lot of that is just maturity. A lot of that is we just have 22 and 23 [year-old players], and I’m not making excuses for age, because our young guys have been through a lot, and had some shining, brilliant moments.”

Still, Ainge — who has been in his role with the Celtics since 2003 — stood by his team, even amid his frustration.

“I don’t question my coach, I don’t question my players,” Ainge affirmed. “I just look at what they’re doing and last night was one of those games where I was very frustrated, in that I didn’t think anything Miami was doing was causing us to make the plays that we made. They were unforced errors.”

Summarizing the team’s performance in the game overall, Ainge admitted uncertainty as to why Boston was unable to capitalize on the Game 3 win.

“Last night was a rough one,” said Ainge. “I just didn’t feel like we had it from the beginning. We had a good spurt to take the lead late in the game, but we were throwing the ball all over the place. We didn’t have the same confidence and swag we had in Game 3 and it’s hard to know why. You have to give your opponent credit – oftentimes we think oh you just didn’t come out ready to play or didn’t play hard enough, but a lot of times the opponent has something to with that.”

“Tyler Herro, looked like he was just shooting in the gym by himself for a while,” Ainge added of Herro, the 13th overall pick in the 2019 draft.

Trailing the series, Ainge still has confidence in the Celtics’ ability to respond.

Looking ahead to Friday’s Game 5 at 8:30 p.m. (and possibly beyond if Boston wins), Ainge had a simple endorsement.

“I don’t think this team is done yet.” 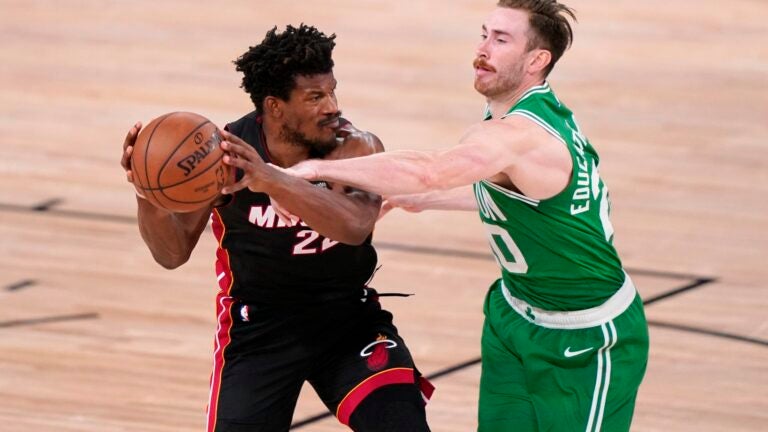 5 takeaways from the Celtics’ Game 4 loss vs. Heat