Jaylen Brown said he considered skipping the NBA restart after his grandfather, Willie Brown, was diagnosed with cancer right before the idea of a bubble in Orlando came to fruition.

The Celtics star – speaking on The Ellen DeGeneres Show on Tuesday – noted that his grandfather has been living with him, and Willie has needed his grandson around. Brown, who has said previously that there’s “no one as cool” as his personal quarantine trainer Willie, called him “the toughest guy I’ve ever met” while speaking on Ellen.

“He’s like a superhero,” Brown said. “He’s been to the Vietnam War, he’s been shot in the head twice, he’s had a heart attack, cancer, COVID, all at the same time, and has beat it all.”

There is nobody as cool as my grandpa

Initially, Brown said Willie was reluctant to start chemotherapy, understandably worn down and exhausted by everything thrown his way at once.

Brown said his grandfather told him he was done fighting, and he was tired, so they struck a deal that Brown would go down and play basketball as long as Willie kept “playing” and fighting himself. While Brown worked hard to spearhead the social justice movement in Orlando and win games for the Celtics, Willie would do everything in his power to keep battling.

“He liked the sound of that, and he signed up,” said Brown, who was instrumental in the Celtics’ run to the Eastern Conference Finals.

Brown said Willie, who is often referred to as “The Great Will B,” is “doing great now.”

He and DeGeneres discussed several other topics, including his mother, Michelle. Brown made sure to give his mom a shoutout at the beginning of the conversation, joking that she would disown him if he didn’t.

DeGeneres praised Brown’s upbringing, saying that Michelle “made a good one.” “You’re a really good guy,” she added.

She then asked what the bubble was like, and Brown said it was an adjustment that required a great deal of sacrifice but ultimately turned out well. He credited the NBA and the National Basketball Players Association for helping to ensure player safety and create an environment that yielded zero positive COVID-19 results.

DeGeneres praised the Celtic for his work in the community and garnering the NBA Community Assist Award. Brown said that helping out is all he knows and is something his family taught him over the years.

“It’s a little bit strange, a little bit awkward for receiving recognition for being into the community and helping out,” Brown said. “It’s a strange dynamic for me, because my family and the people around me have always instilled that giving back is an obligation.”

Jaylen Brown is no stranger to giving back, getting involved, and using his platform. Here’s a look at some of @FCHWPO’s recent community moments ✊🏾💯 pic.twitter.com/y4fAKKrNgR

Brown also discussed his Juice Foundation, which strives to spread positive energy to help young men and women through education while bettering the community and world.

DeGeneres presented Brown with a $10,000 check to benefit the foundation, and she also surprised him with a backpack full of tea as an early birthday gift.

“I love tea,” Brown said. “I know that’s probably a strange dynamic for a large guy to love tea, but it’s the truth.” 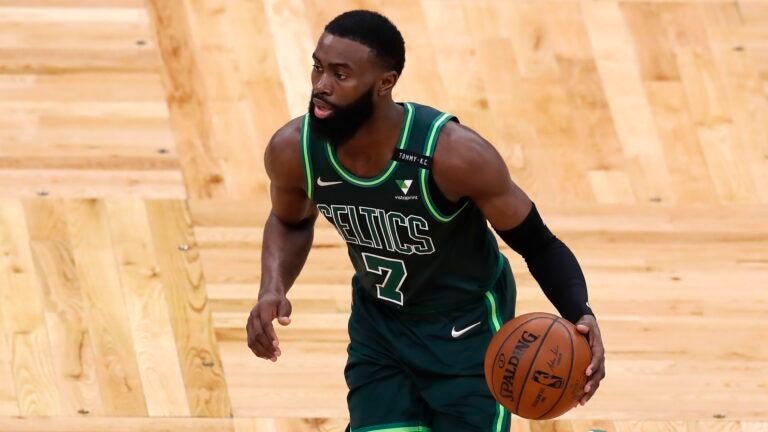