The Celtics are set to open training camp Tuesday following the shortest offseason in league history.

In other basketball news, the Boston College men’s hoops team nearly rallied from a 20-point deficit against St. John’s, slicing the margin to 1 with 30 seconds left before falling, 97-93, at Mohegan Sun. No. 6 Duke and No. 8 Michigan State are set to battle at 7:30 p.m. and No. 7 Kansas and No. 20 Kentucky will face off at 9:30 in arguably the most enticing slate of games so far this year.

After several COVID-19-related delays, the Steelers-Ravens game is currently set for Wednesday, Dec. 2, at 3:40 p.m.

The New England Revolution are gearing up for their first conference final appearance since 2014. They’re set to face the Columbus Crew this Sunday, Dec. 6, at 3 p.m.

Kemba Walker won’t return until at least January. The Celtics announced Tuesday morning that starting point guard Kemba Walker received a stem cell injection in his left knee and is expected to return to on-court activities in early December.

Walker, who consulted with multiple specialists in early October before having the procedure, will be on a 12-week strengthening program to prepare for the upcoming season. The Celtics said in a release that they’ll provide an update on his game availability during the first week of January.

With the NBA season scheduled to start three weeks from Tuesday, on Dec. 22, it’s clear now that Walker will miss at least the first week – potentially up to a month, according to NBC Sports Boston’s Chris Forsberg.

In his absence, it appears likely that newly acquired veteran Jeff Teague will serve as the temporary starter and rookie Payton Pritchard and second-year player Tremont Waters will have a chance for significant roles. It’s possible that Marcus Smart could see more time at point guard as well and the Celtics could rely on a two-big lineup with Tristan Thompson and Daniel Theis.

President of Basketball Operations Danny Ainge said Tuesday on Toucher & Rich that he’s “not worried about Kemba” and that this provides an opportunity for other players to step up in increased roles.

Danny Ainge on @Toucherandrich on Kemba Walker’s knee woes: “I’m not worried about Kemba. He’ll be back. It’s an opportunity for Marcus, Jeff Teague, Payton Pritchard.”

Asked about Isaiah Thomas, Ainge notes he feels like team is well-stocked at position.

In other injury news, the Celtics shared that second-year guard Romeo Langford underwent successful surgery Sept. 22 to repair a torn scapholunate ligament in his right wrist. The team said Langford’s return to play was projected to be four-to-five months following the procedure. His rehab has gone as planned, which would theoretically put him on track to return sometime in January or February like Walker.

Tristan Thompson, a seasoned forward who the Celtics recently acquired, suffered a minor hamstring strain during an offseason workout before he got to Boston, according to the team. His availability during the first week of training camp will be limited.

The Celtics, who finished their playoff run just two-plus months ago, are set to face the Philadelphia 76ers in two weeks to open the preseason.

Eduardo Rodriguez and the Red Sox reportedly agreed to a deal: The left-handed pitcher and Boston avoided arbitration and agreed to a one-year, $8.3 million deal Tuesday, according to USA Today‘s Bob Nightengale.

Starter Eduardo Rodriguez, who missed all of last season because of myocarditis and COVID-19, has agreed to a one-year, $8.3 million contract with the Boston #RedSox in his final year before free agency.

Rodriguez, who missed all of last season due to myocarditis and COVID-19, is set to make the same salary he received in 2020. He’ll become a free agent next offseason.

After a sterling season in 2019 and a setback in 2020, Rodriguez told The Boston Globe‘s Alex Speier in November that he feels great and that he’s happy he just had myocarditis and is “not six feet underground.”

Trivia: On this date, many decades ago, the Bruins welcomed the Montreal Maroons to Boston Arena for the first National Hockey League game ever played in the United States. What year did that game take place?

Hint: It happened in the same year that both former presidents Jimmy Carter and George H.W. Bush were born.

— Julian Edelman reportedly placed on COVID-19 list by Patriots
— Ignore sports radio, Danny Ainge is the best person to lead the Celtics
— Sports Q: What is your favorite piece of sports memorabilia that you own?
— Ravens-Steelers rescheduled again by COVID-19 to Wednesday
— ‘I cared too much’: A gymnastics coach accused of emotional abuse speaks out.
— Fueled by latest win, Patriots embracing tough road ahead
— ABC will air Patriots-Bills ‘Monday Night Football’ game in December
— Kyle Draper is leaving NBC Sports Boston

Bill Belichick offered his two cents on Kyle Dugger: When the Patriots took safety Kyle Dugger out of Lenoir-Rhyne University in the second round of the 2019 NFL Draft, the pick certainly raised a few eyebrows.

Dugger showed his potential in flashes early, and his role has increased as of late. He’s played 80 percent of snaps in the Patriots’ last three games and has helped contain explosive quarterbacks Lamar Jackson, Deshaun Watson, and Kyler Murray.

When asked about Dugger’s spike in playing time and production, Belichick said his technique, recognition, and willingness to make contact have stood out this season. He made it clear the Patriots learned a lot more about him at the Senior Bowl than during his games at Lenoir-Rhyne.

Belichick on Kyle Dugger: “With all due respect, whoever he tackled at Lenior-Rhyne or whoever he covered at Lenoir-Rhyne … I’d say the level of competition was dramatically different.”

Reiterated that they learned a lot more about him at the Senior Bowl.

Daily highlight: DK Metcalf racked up 177 receiving yards Monday night as the Seattle Seahawks stymied the Philadelphia Eagles in a 23-16 win that was more lopsided than the score indicates.

Metcalf, who now leads the NFL in receiving yards (1,039), made several ridiculous catches, including this grab early in the fourth quarter.

DK is a matchup nightmare. This catch 😱

On this day: On Dec. 1, 1912, Boston Braves franchise owner James Gaffney bought the Allston Golf Club on Commonwealth Avenue with a plan to construct a ballpark there. Groundbreaking for Braves Field started a few years later, in March 1915. 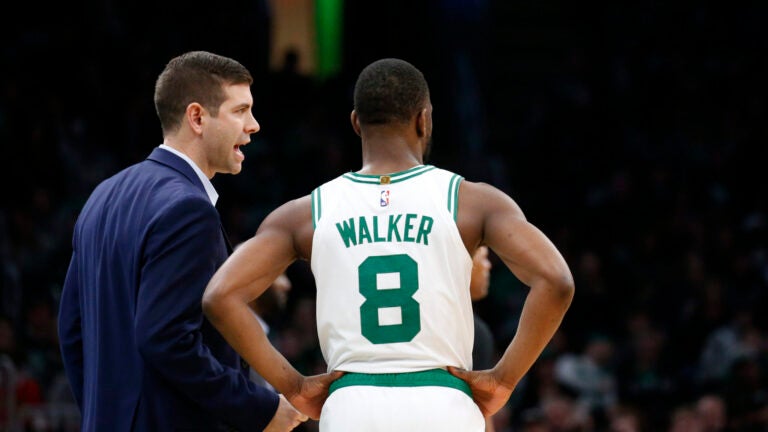 Kemba Walker reportedly had a ‘tension-filled’ relationship with Brad Stevens