Rockets star James Harden hasn’t publicly demanded a trade, but his actions in recent days have made it clear that he wants out of Houston.

After reportedly turning down an extension from the Rockets and setting his sights on a trade to the Brooklyn Nets last month, Harden has expanded his list of teams he’d like to be traded to. Harden is now open to getting traded to the Philadelphia 76ers or other contending teams, ESPN’s Tim McMahon and Adrian Wojnarowski reported.

In return for Harden, the Rockets want “a young franchise cornerstone and a bundle of first-round picks and/or talented players on rookie contracts,” McMahon and Wojnarowski reported.

The Celtics do have the young franchise cornerstone the Rockets are probably looking for in Jayson Tatum. However, it doesn’t appear the Celtics would have to part with their young star in order to get Harden. Due to the extension he signed in November, the Celtics currently can’t trade Tatum due to a poison pill restriction.

In addition to Tatum being off-limits to trade, center Tristan Thompson and guard Jeff Teague can’t be traded because league rules prohibit teams from trading players recently signed up to a certain date. It’s unclear when that restriction will be lifted, but it should be prior to the reported March 25 trade deadline.

The Celtics also cannot trade the $28.5 million trade exception they received for Gordon Hayward because Harden’s salary ($41.2 million) is larger than the exception.

Every other player on the Celtics’ roster is available to trade. Because the Celtics are over the salary cap, they must match salaries in any trade and with Harden’s large salary, they’d more than likely have to trade two of Kemba Walker, Jaylen Brown, and Marcus Smart.

The Rockets likely wouldn’t want Walker due to his age (30), recent knee issues, and their recent acquisition of John Wall.

That leaves Brown and Smart as the two players who would likely have to go in order for Harden to come to Boston. Brown ($23.7 million) and Smart’s ($13.4 million) salaries would be enough to match Harden’s salary, according to ESPN’s Trade Machine. The Celtics could also trade any of Robert Williams, Romeo Langford, Grant Williams, Aaron Nesmith, and Payton Pritchard (all of whom the Celtics have picked in the first round of the draft over the last three years) to help sweeten the pot.

While Brown and Smart haven’t made an All-Star Game in their careers, they do show promise. Brown, 24, scored a career-high 20.3 points per game in his fourth season and Smart has made the All-Defensive first team twice in his six seasons.

For the first time in a while, the Celtics do not own any future first-round picks besides their own. They do hold all of their first-round picks from 2021-27 (the only ones that are tradeable) and can trade a multiple of them or allow the Rockets to swap picks in certain years if they wish.

ESPN’s NBA Insider Bobby Marks writes that “Boston could have the most appealing package for Harden” if it offers Brown, Smart, and three first-round picks.

A couple of other teams that could match the Celtics’ offer for Harden are the 76ers and Nuggets. Philadelphia recently hired former Houston general manager Daryl Morey to be its president of basketball operations. Morey hasn’t been shy in his praise of Harden, who he traded for in 2012. The Sixers could move two-time All-Star and All-NBA guard Ben Simmons, who would likely be the most accomplished young player offered in a trade for Harden. However, Philadelphia hasn’t had discussions with Houston regarding a Harden trade, according to ESPN.

The Nuggets could potentially offer guard Jamal Murray and forward Michael Porter Jr. in a trade for Harden. Neither player has made an All-Star Game, but both of them played key roles in the Nuggets’ run to the Western Conference Finals this past season. Murray averaged 26.5 points per game and Porter added 11.4 points per game as a rookie in the playoffs.

If both teams refuse to add their young stars or promising players, it could leave the Celtics as the only team that fits the Rockets’ ask. We’ve seen Danny Ainge pull the trigger before on trading for star players, doing so in trades for Kevin Garnett, Ray Allen, and Kyrie Irving, but he may not this time.

Irving, who was the last star Ainge traded for, left Boston as a free agent after two seasons in town. After that experiment, Ainge could be shy on acquiring Harden, who can become a free agent in two years. It was also reported in November that the Celtics were advised to stay away from Harden.

Ainge could like Brown and Smart too much to trade them. ESPN’s Zach Lowe speculates that trading the pair would be a tough call for the Celtics to make.

“If the [Rockets] call and express interest in Jaylen Brown, you got to have a meeting about that if you’re the Celtics,” Lowe said on his podcast “The Lowe Post.” “If it’s not Tatum and it’s Jaylen Brown and Marcus Smart and a bunch of picks, you at least gather people together and take a poll and talk it out. I think that’s reasonable.”

Trading for Harden would give the Celtics one of the league’s top duos and more star power. By trading Brown and Smart though, it would tighten their window to win a title and make it more difficult to build a championship team as Tatum enters his prime. 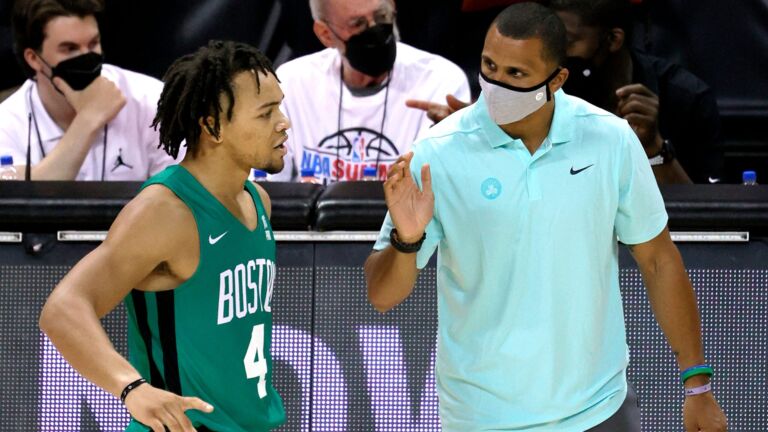