“I kind of had a feeling that he would be a guy for me that would stand out,” Smart told reporters on a Zoom call Thursday evening. “I was looking forward to seeing what he has, and he hasn’t disappointed yet.”

The Oregon product was a surprise pick for Boston at No. 26, since most mock drafts projected he would go in the second round, but Danny Ainge selected the senior hoping he could shore up Boston’s depth at point guard. That only became more important when Gordon Hayward opted to sign with the Charlotte Hornets, which will likely pull Smart out of a bench role and into the starting lineup.

Like Aaron Nesmith, Pritchard faces a challenging rookie season. The league’s condensed offseason eliminated Summer League, and it trimmed months of focused practice with Celtics assistant coaches away from the rookies. But like Nesmith, Pritchard will have a real opportunity for minutes early in the season if he can work his way into the rotation — Kemba Walker is expected to miss time at the start of the season and might be limited even after he returns. Free agent signee Jeff Teague is likely to surpass Pritchard on the depth chart, but Boston will still need a ball handler coming off the bench.

Jayson Tatum agreed with Smart’s assessment of the team’s (rookies).

“I like those guys a lot,” Tatum said. “They work hard. Aaron can really shoot. He’s really physically gifted athleticism and strength-wise. And Payton, obviously he’s shooting the ball really well and he really knows how to play and he competes at a high level, and I like that.”

“He’s tough, he knows how to play, he’s physical, he shoots the ball,” Stevens said. “So I think that he certainly has had a good couple of days. What that means in the long run, big picture, there’s still a lot to sort out. I’m not surprised that he’s stood out to Marcus. I do think that he’s got a lot of courage, I believe he’s got a lot of grit. Obviously, that’s why we picked him in the first round, why he’s a good player.”

Pritchard averaged 20.5 points, 4.3 rebounds and 5.5 assists in his senior year, earning consensus All-American honors as well as Pac-12 Player of the Year.

“He’s a guy I think can play in any system,” Ainge said shortly after the draft. “He can play with any players. I love how he pushes the pace. He’ll make guys run. He’s playing with the ball in his hands. He gets the ball up the court very quickly and I think that’ll be a help to get the rest of the players up the court very quickly. He has that kind of leadership ability with the ball in his hands. He’s a fun player, and I’m very excited to get him.” 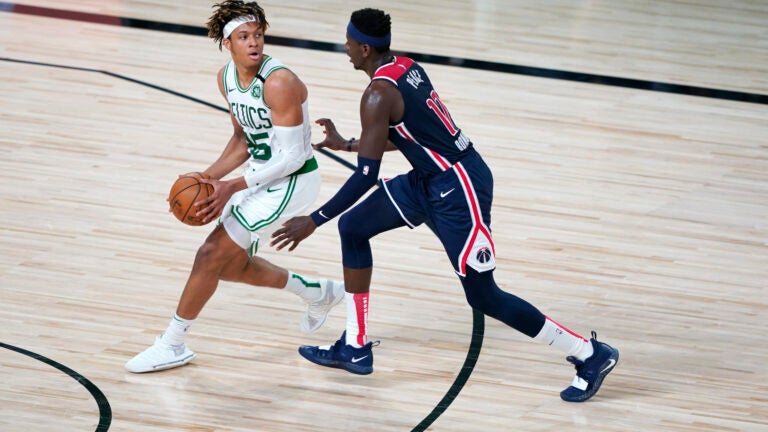 Celtics’ Romeo Langford is out of a cast, but still ‘a ways away’ from a return