“Payton Pritchard had his finger pop out today,” Stevens told reporters via Zoom, when asked if he had any other injury updates in addition to Kemba Walker and Tristan Thompson. “I don’t know what the right medical term is for that. But they were able to place it back and hopefully his timeline to return to practice will be sooner rather than later.”

Pritchard, who was the Celtics’ second first-round selection at No. 26, has impressed teammates and coaches in the early going. Marcus Smart singled out Pritchard as a player he had been excited to watch and said the 2020 Pac-12 Player of the Year “hasn’t disappointed yet.”

According to Stevens, Pritchard practiced again Sunday — just one day after the injury.

“He’s tough,” Stevens said. “He tried to get in practice yesterday and like I said, they popped that thing back in and he was begging to come back into practice, but they waited — rightfully so — until there was an X-ray taken to make sure there were no other issues. He practiced fully today with his fingers taped up. He’s a tough little guy.”

Pritchard was asked last week about preparing for the regular season without the benefit of Summer League or a normal training camp.

“I think it’s definitely difficult because you got to come in, you’ve got to learn the playbook right away, you got to learn the defensive schemes,” Pritchard said. “But for me, experiencing what I went through in college and picking up things like that, so I just tried to pick up things right away. Try to get the playbook down before practice started, defensive schemes and all that. So I kind of had my mind wrapped around it before we even started so it wasn’t just coming at me so fast. So I tried to get a head start on things, and that’s how I try to approach it.”

The Celtics open preseason play Tuesday against the Philadelphia 76ers. 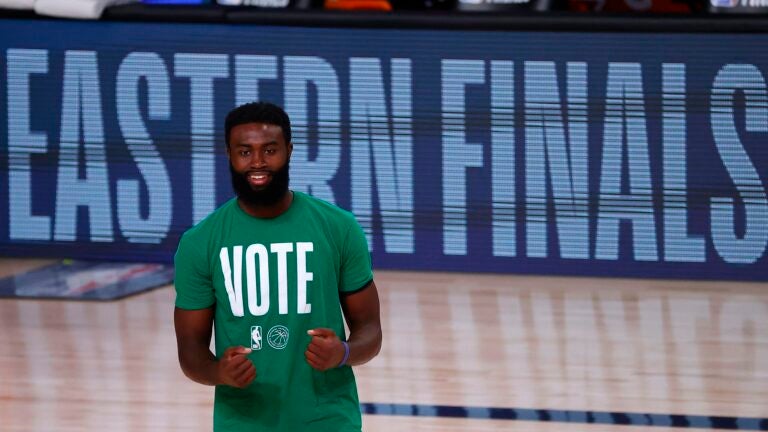 Jaylen Brown on being named a ‘Bostonian of the Year’: ‘I’m trying to be a part of this community’