As Kyrie Irving’s time with the Boston Celtics wound down during the Eastern Conference semifinals in 2019, he left a mystifying impression behind by waving off other players on multiple occasions to guard Milwaukee Bucks star Giannis Antetokounmpo.

It didn’t work. Antetokounmpo got to the rim at will, and the Bucks rolled over the Celtics in five games.

Now Irving wants to showcase another big-man skill — post-ups. On one of Irving’s recent Instagram Lives, his new star teammate Kevin Durant made an appearance and quizzed Irving good-naturedly about a previous conversation, noting that Irving once said he wanted eight post-ups per night — four in each half.

“I think that’s too much for a 6’1 point guard,” Durant said. “I think that might hold up our offense. I wonder why you decide to play more of a big than your normal position.”

“In my past life, like I said, I was you,” Irving told Durant. “I was you. What you are now, that’s what I’m up here. Same mentality.”

“I don’t think that’s good for the continuity of our offense if our point guard always want to be underneath the rim,” he answered.

Irving asked for seven post-ups per game, saying he feels like he has a mismatch every time he has the ball.

“I mean, we negotiated,” Durant said. “I thought we was going to do two-and-a-half post ups a game. The half one is I throw you the ball in the post and you throw it right back to me.”

Last season, Irving did not register the requisite 10 post-up possessions to qualify for tracking data on the NBA’s stat site. In 2018-19, however, he averaged 1.16 points per 100 possessions — good for the 91st percentile league-wide.

In other words, Irving actually has a semblance of an argument: He can be very effective in small doses posting up. But Durant is probably right too — opposing teams will quickly figure out how to limit a small guard parking himself close to the hoop.

Irving remains on a self-imposed media blackout, for which he was fined $25,000 by the league. He released a statement via Instagram on Friday.

“I pray we utilize the ‘fine money’ for marginalized communities in need, especially seeing where our world is presently,” Irving wrote on Instagram. “(I am) I am here for Peace, Love, and Greatness. So stop distracting me and my team and appreciate the Art. We move different over here.

“I do not talk to Pawns,” Irving added. “My attention is worth more.”

The Nets tip off their preseason slate at 6 p.m. EST on Tuesday night against the Washington Wizards on NBA TV. 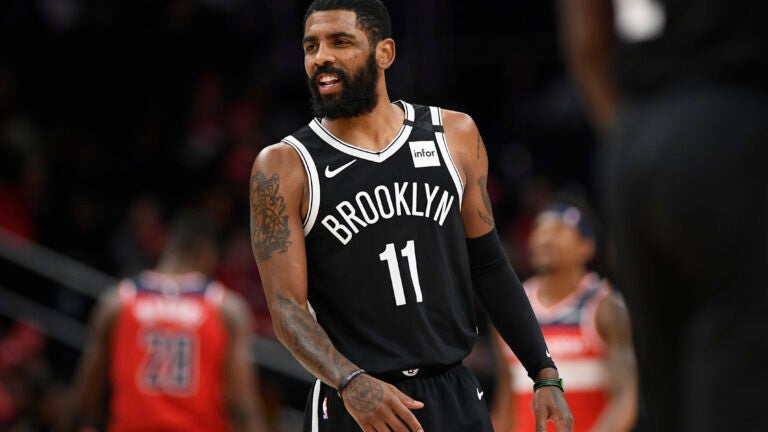 ‘I do not talk to pawns’: Kyrie Irving responds to fine for not talking to media