NBC Sports Boston’s Celtics coverage team has undergone several changes since the start of last season. But a familiar face is returning for the new season.

Abby Chin is returning to the network as the host of its Celtics pregame and postgame coverage, the network will announce Monday. She will be in the role when the Celtics open the preseason Tuesday night against the Sixers.

“It means so much to me,’’ said Chin, who lost her job as sideline reporter due to wide-ranging layoffs by NBC Sports Boston’s parent company in August. “Over the years I’ve been interested in that role, and now, coming back after everything that happened, I feel like I’ve been allowed to have an even bigger role.”

Chin originally joined the network as the Celtics’ sideline reporter in the 2013-14 season, quickly becoming a popular figure among fans and viewers. But in August, when NBC Sports Boston’s parent company, NBCUniversal, slashed its digital and regional cable staffs, she was among 20 people laid off at NBC Sports Boston.

Celtics reporter A. Sherrod Blakely was also among that group. Both Chin and Blakely stayed on until the Celtics’ run to the Eastern Conference finals ended with a six-game loss to the Heat in late September.

Chin remained in Boston with her husband and two children, and kept a positive attitude despite losing a job she loved, burning no bridges at NBC Sports Boston.

She said fans’ kindness during a difficult time was a significant help in keeping her spirits up.

“Just knowing the support was there helped me have the confidence and courage to stay with everything,’’ she said. “It really lifted me up in that difficult time.

“We were never going to leave Boston. When this opportunity opened up, it just felt like a perfect fit. I’m so thankful and grateful to everyone. I hope they know that. It had a profound effect on me.”

The studio host spot opened up in late November when Kyle Draper, who had been with NBC Sports Boston since 2009 and the primary Celtics studio host since the 2013-14 season, took a play-by-play job with the Sacramento Kings.

“When Kyle decided to leave, the possibility opened up,’’ said Chin. “And, of course, I jumped at it and let everyone know that I was very interested. And luckily, it all worked out. I’m just so excited for the season to begin, so excited to still be a part of the best franchise in sports.

Chin, who sometimes hosted Celtics studio programming during her first go-round at the network, auditioned for and landed the job, which had generated plenty of interest inside and outside the network. She will be joined by a rotating group of analysts that includes Chris Forsberg, Brian Scalabrine, Chris Mannix, and Kendrick Perkins.

“Dealing with Scal and Perk is going to be an animal in itself,’’ she said of the animated analysts. “My personality is to be excited and happy, and so I think I might have to get a little bit more of an edge when you’re dealing with those two, which I’m excited about. I love those guys. I know that they can get off the rails sometimes. And now it’s on me to bring them back in.”

NBC Sports Boston announced its full Celtics coverage plans Monday. Mike Gorman is back for his 40th season as the Celtics’ television play-by-play voice. It will be his first without Tommy Heinsohn sitting beside him.

Heinsohn, a Celtics legend as a player, coach and broadcaster, died in November at age 86. Gorman and Heinsohn had worked together on Celtics broadcasts since the 1980-81 season, making them the longest continuous broadcast team in professional sports.

Scalabrine, the former Celtic who is beginning his sixth full-time season with NBC Sports Boston, will be the color analyst. He joined Gorman on road telecasts in recent seasons and also has called a number of home games.

NBC Sports Boston will broadcast both Celtics preseason games and 32 of 38 games in the first half of the regular season, the portion of the schedule that has been announced by the league. 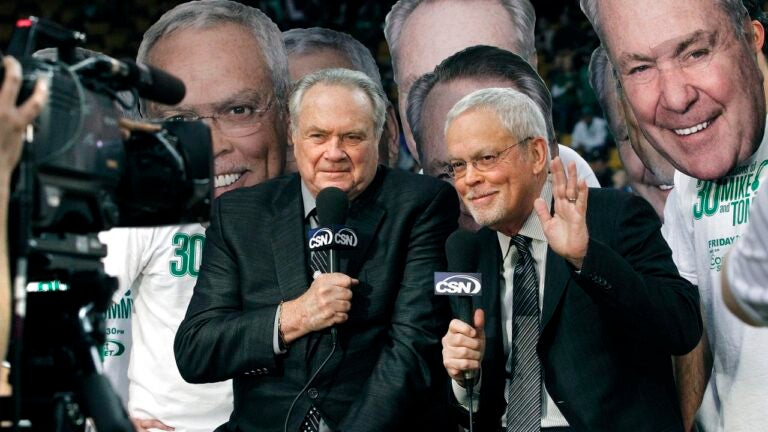