Just 79 days after the Miami Heat sent the Boston Celtics home from the Disney World bubble, the Celtics are set to take the court again.

The Celtics open their preseason slate on Tuesday at 7:30 p.m. against the Philadelphia 76ers on TNT. We can’t know how much the likes of Jayson Tatum, Jaylen Brown and Marcus Smart will play, so what should fans be watching as Boston’s exhibition games tip off?

1. Who is the starting point guard?

Brad Stevens insists that the starting lineup doesn’t matter as much as the finishing lineup, or even the starting lineup in the second half, but this will be interesting to monitor until Kemba Walker returns from his mysterious left-knee soreness sometime after early January. Will the Celtics slot Marcus Smart at the one, who has proven time and again that he could be a starter for most teams in the NBA? If so, who starts alongside Jaylen Brown and Jayson Tatum? Will they keep Smart at the two and start Jeff Teague, who has significantly more NBA experience than Grant Williams, Semi Ojeleye, and especially Aaron Nesmith?

A host of options stretch out before Stevens, but the Celtics’ lack of experienced depth early in the season might matter.

The preseason is in full swing, and one thing is clear so far: The aesthetics of an empty NBA arena are terrible. The video screens with fans Zooming in from across the country are nowhere to be found, and the overall production value of the bubble is gone. In its place, cavernous empty seats stretch infinitely behind the benches, the piped-in fan noise sounds even worse than it did in Orlando and every sneaker squeak is audible on the broadcast.

The basketball is still excellent. Is that enough to keep fans glued to their screens?

3. How much does Jeff Teague have left?

Teague once made an All-Star team, and he’s only two seasons removed from averaging 12.1 points and 8.2 assists in Minnesota, but he turned 32 in June and he started just 17 of the 59 games he played last season.

If Teague just needed a new opportunity, he could be an enormous pick-up for the Celtics — a creator for himself and others off the dribble and out of the pick-and-roll. The Celtics will need point-guard production until Walker returns.

4. Robert Williams: Ready or not?

For three games in the bubble, Robert Williams looked like the player the franchise hopes he can become — an otherworldly athlete with obscenely long arms who protects the rim and offers vertical spacing. In the postseason, he reverted to many of his most frustrating tendencies — jumping prematurely for blocked shots and missing defensive rotations.

So who will Williams be this year? For his sake, the former would be important — he’s eligible for a contract extension after this season. It remains to be seen whether the Celtics’ highest flyer can touch his ceiling, however.

5. How does Grant Williams figure into the rotation?

The Celtics’ ESPN depth chart lists Grant Williams as the back-up power forward and the third back-up small forward, which doesn’t seem particularly likely. Williams’ defensive versatility improved immensely last year, but Stevens evaluates his players based on what positions they can defend, and Williams might not be ready for the wing.

Still, Williams shot 10-for-17 from deep in the bubble, and he told reporters he’s open to whatever Stevens throws at him.

“I’ve played everything, honestly,” Williams said. “Coach kind of just puts me in and expects me to know every position no matter what it is. I’ve done a little bit of everything. Same as kind of last year, no set position. Plus, a lot of guys are out. So it might be different when guys are back like Tristan, or when guys are practicing.”

6. Can Aaron Nesmith space the floor right away?

Stevens has preached caution regarding Nesmith, even while noting the former Vanderbilt wing’s skill as a shooter.

“Aaron Nesmith hadn’t played a 5-on-5 game since January until his first practice, and everybody is asking me if he’s going to be in the rotation or not,” Stevens said. “He was just trying to get down the court. There’s so much growth that we all have to go through. We are just on an expedited timeline here.”

Reading between the lines, many expect Nesmith to contribute right away, since his 3-and-D skill set feels like a natural fit. But NBA defenses are intricate, and Nesmith has had less than a month to prepare. Don’t be surprised if he doesn’t have Stevens’ notoriously difficult-to-earn trust in the early going.

Teague projects to win the back-up point guard battle easily, unless he’s a starter. The favorite to claim Teague’s back-up minutes is Payton Pritchard, who has impressed Stevens, Tatum, and Smart. But Pritchard — like Nesmith — faces a major challenge fitting into an NBA system as a rookie. If he isn’t ready, could Carsen Edwards — or even two-way guard Tremont Waters — see some time on the floor?

8. What can Semi Ojeleye bring?

Few players are in the gym as much as Ojeleye, who famously smashed medicine balls against the locker-room wall after Did Not Play – Coach’s Decisions in 2018-19 but who spends much more time working on his mobility and stretching. Ojeleye fires up endless 3-pointers before and after practice, which is the most obvious way he could get (and stay) on the floor, but he appears to lose confidence in his shot if he misses his first attempt or two. Is this the year he breaks out of that cycle? If so, he might start some games.

Tatum was Boston’s best player at the end of the season, but not at the start. That made for an interesting dynamic where the Celtics won or lost based in large part on Tatum’s performance, but it wasn’t always clear whether the 22-year-old was “the leader.”

Does Tatum need to be more of a leader this year? He isn’t so sure.

“I’m not here walking around saying that this is my team,” he said. “I don’t take that approach. Like everybody else, I show up to work and do my job to the best of my ability and just go out there and play. I don’t feel the need to say it or anybody needs to say it. We all play for the Celtics. We all play a part in the team’s success and obviously, I’m going to be here for a while. So I’m happy for that. But no, I don’t say or think I play that way. We got a bunch of talented guys and I’m happy to be a part of this team.”

That’s a very reasonable response. Tatum has proven he can put a team on his shoulders and win a game down the stretch, which is an important kind of leadership. What happens if a game starts to go sideways and the Celtics need someone to gather them back together?

Philadelphia is a fascinating team. With Joel Embiid and Ben Simmons, the Sixers have two genuine stars who either don’t mesh or have never been surrounded by pieces that make sense. This year, the Sixers have shooters (Seth Curry and Danny Green), a point guard capable of running the pick-and-roll if he’s ready to play as a rookie (Tyrese Maxey), and plenty of wing depth (Green, Matisse Thybulle, Tobias Harris and others).

Is this the year the Sixers put it together? If not, the Simmons/Embiid tandem is probably doomed. This season will be fraught for Philly, but the roster finally makes some sense and could do some real damage in the Eastern Conference.

Philly is also, of course, one of James Harden’s preferred destinations. If things don’t work out, the Sixers could have an incredible Plan B. 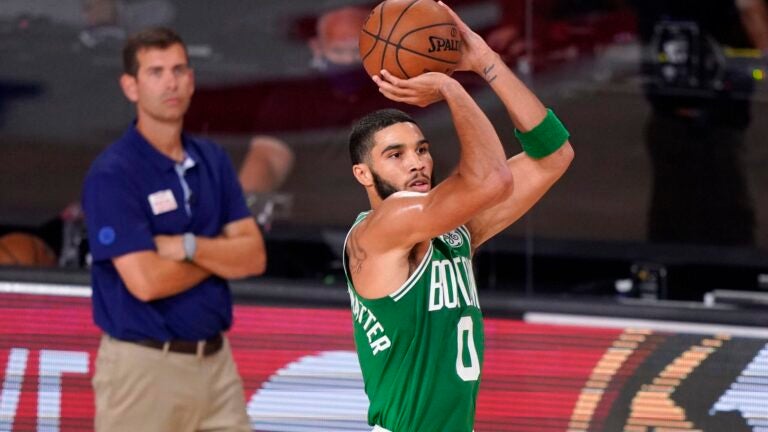