The Boston Celtics dropped their preseason opener to the Philadelphia 76ers on Tuesday, falling 108-99. Both teams pulled their starters shortly after the second half began, but offered glimpses of their new-look rosters and rookie talent.

In the opening minutes, the Celtics looked great — Jaylen Brown hit a 3-pointer, Jayson Tatum attacked the rim hard, and even Javonte Green got into the action.

Then Tatum and Brown cooled off tremendously, and the Celtics’ offense fell off a cliff. The star duo finished a combined 5-for-24 from the floor and 1-for 9 from behind the arc.

Kemba Walker’s absence felt particularly notable. The Celtics will look a lot better when their best players are back, and having a star shot creator and pick-and-roll threat should smooth a lot of the creases that popped up in Tuesday’s loss.

On his post-game Zoom call with the media, Brad Stevens was asked after the game if he’s a little more concerned after Tuesday’s result.

“I don’t think tonight changed my opinion much,” Stevens said. “We have a lot of work to do. I’ve known that from the time we stepped on the court.”

The No. 26 pick was one of the first players off the bench, and — as Marcus Smart put it last week — he hasn’t disappointed yet. Pritchard (16 points, 6-for-10 shooting) looked comfortable with the starters both passing and scoring, and his scrappy defense could help keep him on the floor. In the second half, Pritchard was productive playing alongside a bench unit.

Many draft experts raised eyebrows at Danny Ainge for picking Pritchard so high with other point guards still on the board, and one preseason game certainly isn’t a large sample size. But Pritchard competed, hit a variety of shots, and showed he could run the offense competently. It’s just a start, but a promising one.

Teague historically hasn’t always been consistent, but the Celtics could really use the spark off the bench he provided on Tuesday. When the offense went stagnant without Boston’s starters in the game, Teague was able to create both for himself and for others out of the pick-and-roll — tallying 18 points on 7-for-9 shooting along with four 3-pointers.

Boston will be without Walker until January at the earliest, and when he returns, the Celtics will be very careful with him. A productive Jeff Teague eases that burden immensely — he could start next to Marcus Smart, or he could run the offense in the second unit. Both will likely need to be filled for Boston.

“In the first 30 minutes, I felt like that was the only time the ball was moving the way it needs to, when he was in the game,” Stevens said. “We need to improve when he’s not. …

“We looked the most fluid offensively when Jeff was in the game tonight.”

4. Aaron Nesmith didn’t play until the second half

Fans hoping to watch the Celtics’ highest draft pick grew restless as Nesmith remained glued to the bench in the first half, but he made his first appearance halfway through the third quarter and buried his first field-goal attempt (a 3-pointer, appropriately). Nesmith got four more decent looks and missed them all, but he showed he should be able to find space on the perimeter.

Defensively, Nesmith (predictably) has a lot to learn. Defending the wing at the NBA level is difficult, and Nesmith’s learning curve will be steep with the truncated preseason. If he spaces the floor for Tatum and Brown, however, he could earn minutes even as he learns how to defend in the Celtics’ system.

The James Harden questions will hang over Philly until his situation is resolved, but if the Sixers don’t want to pay a steep price to acquire him, the early returns are solid. Seth Curry had a few nice moments running a two-man game with Joel Embiid, and rookie guard Tyrese Maxey was excellent in the second half against the Celtics’ second unit.

The East won’t be easy this year, and the Celtics tripped out of the gate. It doesn’t matter yet, but a better performance on Friday against the Nets would help.

“I think you saw tonight that we have a little adjustment period that we need,” Teague said. “I think we can obviously be a lot better.” 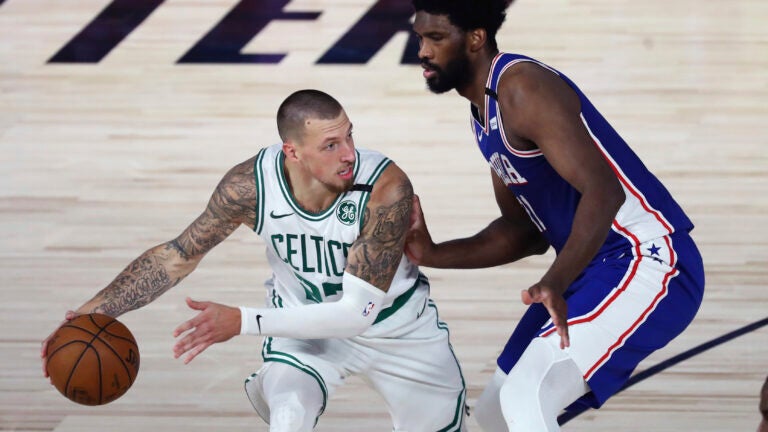