The Boston Celtics looked like they were on the verge of dropping their first game of the season in familiar fashion.

In the Disney World bubble, the Celtics struggled immensely to hold fourth-quarter leads, especially in the Eastern Conference Finals. On Wednesday, after taking a 17-point lead with Jayson Tatum’s three to end the third quarter, the Celtics allowed the Milwaukee Bucks to storm back into the game and take a lead in the closing seconds. A familiar post-game scene felt inevitable.

But Tatum changed the story. His banked 3-pointer as time wound down gave the Celtics a 122-120 lead, and Giannis Antetokounmpo went 1-for-2 at the line with 0.4 seconds left to gift Boston a win.

The Celtics started really emphasizing Tatum’s skill as a shooter last season, and he flourished in that role. When Anteotkounmpo defended his final 3-point attempt, he knew exactly what the Celtics star would do.

“He did his usual move, the step-back,” Antetokounmpo said. “I was right there to contest.”

He was, but it didn’t matter — Tatum’s shot hit high off the glass and fell through.

“Nah, I ain’t try to [to bank it in],” Tatum admitted after the game (to no one’s surprise). “The angle that I had and knowing how tall he is, once I let it go I knew it was going to hit the backboard but I didn’t necessarily try.”

Tatum is not a shy player, but he seemed especially happy to fire up triples on Wednesday, finishing 6-for-13 from deep as he dropped in 30 points. Those 13 3-point attempts were a career-high.

Tatum was asked if he plans to up his 3-point attempts this season.

“I think that’s just how the game went tonight,” he said. “Obviously, I think, something I have tried to emphasize is just being more of a threat, shooting more threes. Something within our offense, something I talked to Brad about. My teammates believe in me, so, taking good shots, but definitely going to shoot more threes.”

The Celtics used Brown as a ball-handler quite a bit to great effect. Brown finished with a game-high 33 points on 13-for-24 shooting after a slow start, and much of his offense came in the mid-range.

Brown found ways to create space out of the pick-and-roll in a variety of ways. He picked the Bucks apart repeatedly in the mid-range where pick-and-roll defense is often weakest and even implemented Chris Paul’s favorite trick at times — weaving around the screen, stopping to keep his defender frozen behind him, then exploding away from that defender for a jumper.

Last season, Brown made enormous strides with the ball in his hands, but he was rarely utilized the way the Celtics used him on Wednesday. He was asked how comfortable he felt in his new role.

Brown has always had an affinity for mid-range jumpers, even as he expanded his game to the 3-point line. On Wednesday, he showed he can be a lot more than a player who just attacks closeouts.

The Celtics started with two bigs and played them a lot.

After starting Javonte Green at the wing in preseason, Brad Stevens went with two bigs in the starting lineup: Daniel Theis and Tristan Thompson. The results were mixed — Theis made a pair of triples in the early going and Thompson had a nice debut, but the Celtics’ defense was porous in the first quarter, especially in transition.

“It was a function of I was really upset with how we played up to this point and I wanted to start a very, very good defensive lineup,” Stevens said, when asked about his reasoning. “And we have to play a lot better at that end still.”

The Celtics have skewed smaller and more versatile in recent years, but particularly against a team like the Bucks, two bigs made a lot of sense. Antetokounmpo’s size is devastating, and Milwaukee often plays him next to Brook Lopez — a towering center with deep 3-point range and soft touch in the post.

“Big men know how to adapt. Big men can make big plays,” Tristan Thompson said. “You guys always talk about the small ball, but you saw what happened to the Houston Rockets when they played against the Lakers. So the small-ball stuff is good, but when it comes down to the playoffs, you need real bigs to win games. And you go look at all those teams that are competing at a high level for a championship, they play their bigs when it matters.

The Celtics’ stars have always said all the right things about each other, and that trend continued on Wednesday. In his post-game comments on TNT, Tatum called his performance “terrible” and made an unprompted reference to Brown’s 33-point night. Asked repeatedly about Tatum’s game-winner after he led the team in scoring, Brown lauded his star teammate.

“Hell of a shot. Big time shot,” Brown said. “Those are the type of shots that we trust JT with, that he looks forward to. I don’t know if he called glass, but I’ll take it.”

Young stars like Tatum and Brown are often put under a microscope, since one of the easy narratives about a team with two similarly talented players at the same position is “Can they coexist peacefully?” Tatum and Brown have never given that narrative any fuel to burn. The Celtics, one can imagine, appreciate that greatly.

In an otherwise eventful game, the Celtics’ rookies were essentially nowhere to be found. Payton Pritchard played 13 minutes and made a deep 3-pointer, but he also made a few rookie-esque defensive mistakes (poor Pritchard has now been scored on by both Giannis Antetokounmpo and Kevin Durant in consecutive games). Aaron Nesmith didn’t see the court.

In a season opener, rookies are often a focal point, but the Celtics needed their best players on the floor at all times to have a chance against Milwaukee. Pritchard and Nesmith, it seems, aren’t there yet. 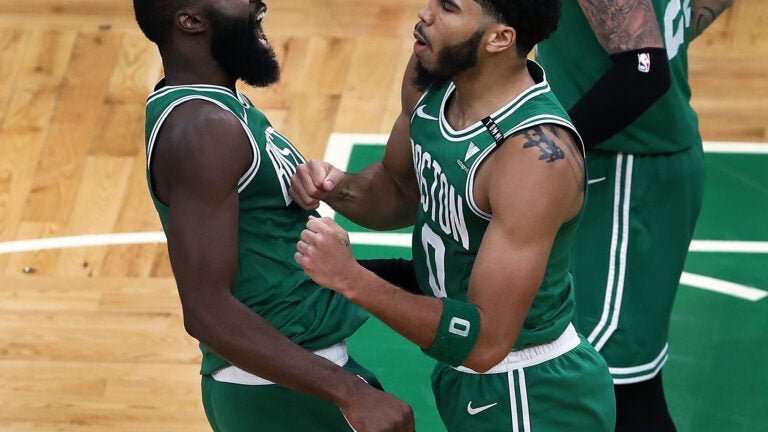