After weathering an offensive explosion by Kevin Durant, the Celtics trailed by just three late in the third quarter of their Christmas Day matchup against the Brooklyn Nets.

Then Jaylen Brown and Marcus Smart went to the bench, both saddled with four fouls, and the game got completely out of hand. The Nets outscored Boston by 25 in the final 17 minutes, claiming a 123-95 victory.

Here are five takeaways from Boston’s second straight beatdown at the hands of Brooklyn.

The Nets might be the best team in the NBA so far.

Don’t let the final score fool you: The Celtics were much better Friday than they were a week prior in their preseason loss. Boston took a lead into halftime bolstered by Jaylen Brown’s continued excellence, and the team’s attention to detail was significantly better.

The Nets are just really good, and any small letdown can balloon into a big problem. On Friday, that letdown began early in the third quarter as Kevin Durant punished the Celtics for defending him with Tristan Thompson. Durant, who took just six shots in the first half, made four baskets in a row start the third and assisted on a fifth. Boston’s defense tried to clamp down, but at that point, the presents were already open without a gift receipt. The Celtics pushed back a couple of times, but Kyrie Irving slammed the door en route to 37 points.

The Nets have star scorers who lift their ceiling and a strong supporting cast. Plenty can happen over the course of a season, but Brooklyn looks ready to make some noise.

“They’re very capable of pouring it on,” Brad Stevens said. “I think it’s the deepest team in the NBA and … certainly in the conversation for the best. We know that we have a lot of work to do, that’s very clear. And we know what we have to shoot for. Good to know.”

Twice in the first half, referees whistled Celtics big men for setting seal screens — rolling to the hoop out of the pick-and-roll and simply stopping as Tatum drove to the rim. Brad Stevens was livid and picked up a technical advocating for a play that generated a lot of points for Boston last year.

“I get a lot of buckets off Theis setting screens and sealing and stuff like that,” Tatum told reporters last year. “I always make sure I say thank you.”

The initial screen gives Tatum an advantage against his defender, and by stopping in the paint, the rolling big man prevents his own defender from helping. That opens enough daylight for Tatum to cruise to the rim. If seal screens are now illegal, the Celtics will need to find another way to buy Tatum some layups.

“I don’t really get that,” Tatum said. “A roll and seal, I don’t think there’s as much difference if they were rolling to catch the ball. But I guess the refs watched the tape on it and are emphasizing it, so we’ll have to adjust.”

That feel showed itself in a few different ways in Boston’s first two games. Most notably, Brown is slinging passes he never made before.

Paint-to-corner passes are really important, especially for a player who is operating out of the pick-and-roll more than ever before. In a lot of ways, Brown — who some smart basketball people suggested should be a power forward as recently as two years ago — is operating like a primary ball-handler. He’s running some of Brad Stevens’ favorite dribble hand-off sets. He snakes around screens and keeps defenders trapped on his back or hip. His shooting percentage dipped against Brooklyn after he missed some shots trying to lead a Celtics rally down the stretch, but Brown has been the best player in consecutive games for a team that desperately needs him to take a leap this season.

Against the Bucks, the Celtics’ ability to find good offense outside of transition opportunities was crucial — Boston averaged a sparking 108.7 points per 100 possessions in half-court sets, according to Cleaning the Glass. On Friday, however, that number plummeted to 78.7.

The major missing piece, of course, is Kemba Walker. That will be the case until early January at best, and at worst it could be a theme throughout the regular season as the Celtics try to keep him healthy for the postseason. Walker can probe the defense and score at all three levels, which relieves a lot of pressure on Boston’s other stars when the team can’t get quick fast-break points.

But the Nets managed to limit Tatum — who is yet to shoot a free throw in the regular season — to just 20 points on 22 shots, and aside from Brown and Smart, no other Celtic scored in double digits. To make matters worse, Brooklyn outscored Boston 17-7 in fast-break points and 38-25 in bench points.

Still, one game is not an entire season, and Brown expressed confidence in the team’s offensive direction.

“I think the offense is making good strides,” Brown said. “Obviously I think we played some good basketball for about three and a half quarters, but those guys put a lot of pressure on us with their shot-making ability, and we’ve got to stay with it. We’ve still got a lot of growth, a lot of learning in front of us, but I’m looking forward to it.”

To end the holiday on a positive note, the Celtics played both Payton Pritchard and Aaron Nesmith. Of the rookies, Pritchard in particular looked comfortable. He hit a deep triple, went 3-for-5 from the floor and dug out a pair of steals. If Pritchard proves to be a reliable option, the Celtics’ bench feels more tenable until Walker returns. 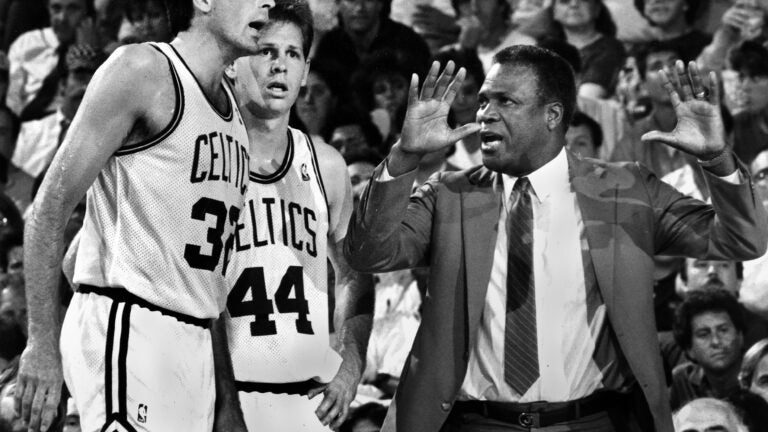