The Boston Celtics dropped their second game in a row on Sunday, falling 108-107 to the Indiana Pacers after Domantas Sabonis hit a go-ahead layup and Jayson Tatum’s last-second 3-point attempt rimmed out.

Here are five takeaways, as Boston fell below .500.

Jayson Tatum took a bad shot. Was he fouled?

There’s little doubt Tatum’s last-second 3-point attempt was ill-advised. He could have done any number of things with seven seconds remaining, and while he just made a step-back game-winner on opening night, the Celtics’ best player needs to find a better shot closer to the rim when he’s being guarded by Malcolm Brogdon instead of Giannis Antetokounmpo.

He knows. Just ask him.

“That was on me,” Tatum told reporters after the game. “I need to put more pressure on the defense.”

The defense, however, put plenty of pressure on Tatum’s final shot. Malcolm Brogdon closed out hard to defend Tatum’s 3-point attempt, and he came very close to committing a foul in the process. Here’s a look at how Brogdon landed.

Tatum kicked out a tiny bit, but Brogdon didn’t give him much space to land. pic.twitter.com/2H9t8MekbI

The NBA has placed a lot of emphasis on giving shooters room to land, and Brogdon came very close to cutting off Tatum’s space. That would have been a highly controversial call to make late in the game, especially since it would have put Tatum — an 82.9 percent career free-throw shooter — at the line needing to make two of three to win.

Still, the NBA’s Last Two Minutes report will an interesting read on Monday.

In Boston’s two games prior to Sunday, Jaylen Brown posted usage percentages of 28.4 and 40.8. On Sunday, his usage — which is an estimate of the percentage of plays a player uses while on the floor — fell all the way to 20.0.

Brown was still efficient, finishing with 16 points on 8-for-13 with four assists, and he showed more flashes of his improved passing and handle. That’s part of the problem: The Celtics appeared to run less for Brown specifically, which feels like a bit of a mistake after he opened the season with 33 and 27 points in Boston’s first two games respectively.

Part of Brown’s success in those first two games was due to the sets Boston ran for him. He seems to thrive coming off screens and running the pick-and-roll, which is an easy way for him to gain an advantage. It’s a little unclear why the Celtics went away from that on Sunday.

“Where we’re at in the process is game three,” Brown said. “Obviously, we don’t want to let things continue to build, but at the same time, like I said, it is a process.”

Just three games, but the Celtics have the league’s worst defense.

Three games, obviously, is not a representative sample size, but if you’re looking for a statistical explanation for Boston’s struggles, the defense is the easiest one — according to Cleaning the Glass, Boston is giving up a league-worst 123.7 points per 100 possessions.

The Celtics have been terrible in transition, which continued against Indiana — the Pacers added 5.4 points per 100 possessions in transition play, according to Cleaning the Glass. Part of that was due to Boston’s sloppy play. The Celtics turned the ball over 18 times, including 11 in the first half, which helped Indiana stay afloat before their third-quarter explosion wrested control of the game.

But Boston’s defense has struggled in other areas as well so far. Celtics defenders repeatedly let Malcolm Brogdon (25 points) get to his preferred left hand as a driver, and they allowed Doug McDermott (16 points off the bench) to get this right. Against the Nets, they let Kevin Durant find a groove in the third quarter, which was the falling pebble that started a mudslide.

The Celtics had the fourth-best defense in the league last year, and the personnel hasn’t changed so much that fans should panic yet. Brad Stevens’s teams tend to defend well, and as Jayson Tatum noted, they are “still trying to work the kinks out and figure each other out.” But the team’s opening schedule — full of road games and Eastern Conference contenders — isn’t exactly made for working out kinks.

Often teams find that drafting older, “NBA-ready” players actually isn’t a great idea, and that a better young talent actually takes less time to prep than a four-year player who never proved to be a first-round pick in his first three years.

That does not appear to be the case with Payton Pritchard, who dropped 13 points on 5-for-5 shooting on Sunday. The four-year guard plays hard on the defensive end, which has earned him minutes from Stevens and respect from Marcus Smart, and his 3-point shooting is very real — Pritchard has buried a few deep triples so far. His ideal role on this year’s team is a little murky, especially after Kemba Walker returns, but he earned himself some minutes and was on the floor late on Sunday.

“Payton has really stood out with his ability to pick things up on the fly from a defensive perspective and use his physical advantages, which are his speed, his strength, his grit,” Stevens said prior to Sunday’s game. “And then on the other end, he’s probably played more off the ball than even I’d like. I think we need to have him with the ball a little bit more because he’s really good passing out a pick and roll and making plays with the ball.”

The Celtics have a second game in Indianapolis on Tuesday — part of a two-game series, which the NBA is utilizing to minimize travel and potential COVID exposure.

Stevens believes the NBA should maintain the practice post-pandemic as well.

“The mini-series are great,” he said. “We should continue to do the mini-series after this. I think it makes sense from a travel perspective, from a health perspective. It’s not just about the COVID health part, it’s also about the sleep and the opportunity to not overdo it in airplanes all the time. If we can lessen the miles that all these teams are traveling, I think that’s really important so I like the idea of the series.” 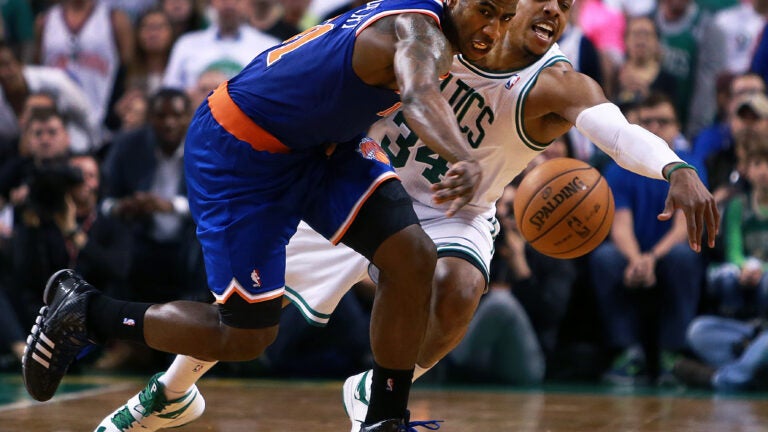