By that point, they had already built a comfortable lead and were on track to cruise the rest of the way (the final score, 126-107, was closer than the rest of the game). With 2:50 remaining, Brown was replaced by Jayson Tatum.

At that point, according to Brown, his teammates broke the news.

“They were telling me, ‘Dang, you are right at your career-high with 34 points,'” Brown told reporters via Zoom after the game. “I gave Brad a little wink and said, ‘Can I get two more minutes?’ He let me go back out there.”

Still, Brown allowed the game come to him. He forced a turnover with under two minutes remaining in the period, but rather than forcing the issue in transition, he laced a tough pass between two defenders to a streaking Tatum, who laid it in.

Initially, the scorekeepers gave Tatum’s basket to Brown — a mistake that was rectified after the period. No matter, however: Brown drew a foul on the next possession and buried both free throws. With his career-high secured, Brown went the length of the floor with Dillon Brooks on his hip the next possession and floated in a runner through contact. He made the free throw, then rattled in a 20-foot jumper before the quarter wrapped.

Round of applause for tonight’s @Gatorade Player of the Game, @FCHWPO 👏👏👏 pic.twitter.com/sFprH3ouKu

“With that type of responsibility that Brad gave me, I still wanted to make sure I played basketball the right way,” Brown said. “It just happened to fall and stuff happened the way it did. Just tried to handle everything responsibly.”

His teammates noticed — and appreciated — his emphasis on playing the right way.

“You also saw the one play when he beat his man, and he already I think had 40 or was close to 40, and he still kicked the ball out when they contested him at the rim,” Daniel Theis said. “So that’s probably his biggest growth. He’s making plays for his teammates. Even the one lob he had to Rob. I think that’s the biggest growth.

“Everybody who knows Jaylen knows he can score the ball, he’s athletic, he can get to the rim whenever he wants. His next step in his growth is just making plays for his teammates too.”

Brad Stevens was asked about Brown’s improvements as a playmaker.

“I just think he works hard at everything,” Stevens said. “He’s a good player. His finishing has improved so much since college, his shooting is probably not as highly thought of as it should have been coming out of the draft. But it’s certainly got a lot better. Just his reads and everything else, he’s just really improved, worked hard to improve. [He’s] got a lot on his plate. He wants to have a lot on his plate and that’s good.” 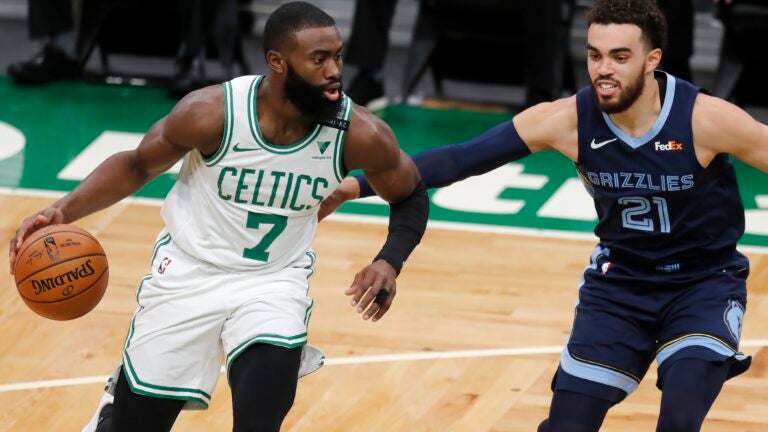