For 48 hours, the Boston Celtics got to enjoy positive headlines about their blowout victory over the Memphis Grizzlies and their young superstar wings.

Then the Celtics scored just 12 first-quarter points against the Detroit Pistons on Friday and after battling back, flopped again late as the Pistons claimed a 96-93 victory — their first of the season.

Five takeaways from a game the Celtics will want to put in their rearview as soon as possible.

The two-big starting lineup is really struggling on both ends.

With the obvious caveat that five games aren’t very representative, the Celtics’ two-big starting lineup — Jaylen Brown, Jayson Tatum, Marcus Smart, Daniel Theis and Tristan Thompson — has really struggled so far. Per the NBA’s stats, they have an offensive rating of 94.4 (extremely low) and a defensive rating of 113.7 (alarmingly high).

On Friday, that unit got ripped apart once again. The Celtics were very flat in the first quarter, posting a net rating of -61.8 thanks to catastrophic offensive numbers. The NBA hadn’t calculated the new totals late Friday night, but that grouping certainly didn’t improve its standing.

Offensively, Daniel Theis simply doesn’t appear to offer the floor spacing necessary to punish defenses for sagging away from him and clogging the paint.

Defensively, as Tatum noted after the game, two bigs should offer some rim protection and rebounding. But again, the problem appears to be fit — Theis is a versatile defender, but he’s most versatile as a center who can move his feet in the pick-and-roll and help protect the rim. Tweener fours like Jerami Grant are a more difficult cover.

Brad Stevens was asked about the double-big lineup after the Celtics lost to Indiana.

“I was hopeful that lineup would be very good defensively,” Stevens said. “I’m still hopeful of that. With that said, we have to have everything on the table because we playing such a tough schedule and it doesn’t stop.”

Marcus Smart’s late 3-pointer had some logic behind it (but still.)

At first glance, Smart threw up a wild 3-point attempt late in the fourth quarter. With the Celtics trailing by one, 30.1 seconds left and 17 seconds on the shot clock, Smart came streaking up the floor behind Jaylen Brown and fired up a tough triple that clunked off the back of the rim and the backboard. The Pistons secured the rebound, and while Mason Plumlee missed one of his two free throws, Smart’s attempt felt costly.

The shot might not be as bad as it looked. Getting a shot into the air assured the Celtics of another possession before time expired, which has value. Smart also hit comfortably more than 40 percent of his “running jump shots” and “running pull-up jump shots” last season, which is how the NBA classifies the look he got. Furthermore, he was 3-for-6 from deep on Friday.

All that aside, Smart was 5-for-14 from the floor overall and 0-for-3 from the free-throw line. The Celtics also caught a break when Mason Plumlee (a career 56.2 percent free-throw shooter) grabbed the rebound and was fouled. A better free-throw shooter might have made both and forced the Celtics to go for three earlier.

So while there was logic, Smart — who has made countless good decisions as a playmaker/passer this season — probably could have chosen his spot better.

The Celtics closed the game with one of Brad Stevens’ favorite sets.

To observant fans, the final play of the game might have looked familiar — a lob over the top of the defense to the opposite side of the court, where the player who catches it passes to a 3-point shooter.  It’s a play the Celtics have run so often, a super-cut of their attempts exists on YouTube from 2016.

The design of the play is all misdirection. On Friday, Tatum cut to the corner to pull the defense away from Grant Williams, who was on the opposite side of the court from Smart – the inbound-passer. Smart shouldered the difficult part  of the set — a pin-point pass over the top of the defense to Williams, who in turn passed to Jaylen Brown curling around the perimeter. Brown got a wide-open look, but like many of the Celtics’ wide-open looks down the stretch, it caromed off the rim.

Stevens said the Celtics’ scoreless four minutes to end the game were less concerning than the effort and execution at the outset.

“That might have been the basketball gods way of saying that we didn’t deserve to win the game,” Brad Stevens said. “The looks in the last minute were all pretty good looks overall.”

On the one hand, Bey looked great on both ends. On and off the ball, he was productive defensively, and he burned the Celtics with 5-for-8 shooting from deep. Nesmith, meanwhile, has yet to break into the rotation, despite pre-draft projections of a plug-and-play shooter. He didn’t play on Friday.

But that framing isn’t particularly fair to Nesmith, who is employed by a much better team with different rotations. As Stevens noted before the Memphis win, the Celtics often play with a nine-man true rotation (players like Semi Ojeleye and Javonte Green sometimes fill in the 4-5 minute cracks). The other members of the rotation are bigs and point guards, while at Nesmith’s position, the starters are all high-minute players. The Pistons also have reason to play Bey through his mistakes for his development, while the Celtics need players who help them win now.

So while Nesmith’s DNP-CD is a tough look, especially since he and Bey always seemed to be grouped together in mock drafts as similarly talented players, there are mitigating factors.

“It’s a unique situation right now from standpoint,” Stevens said earlier this week. “(Nesmith) is doing everything that he needs to do. He’s working really hard.”

At least Marcus Smart has his … karaoke machine?

At Celtics shootaround Friday afternoon, Smart revealed he received a bottle of 12-year-old Bulleit whiskey in the team’s Secret Santa gift giveaway before someone else stole it from him and replaced it with a karaoke machine. Smart might have to nurse the Celtics’ worst loss of the season with some music instead of hard liquor — a much healthier option. Whoever stole it could have a nice evening, however. 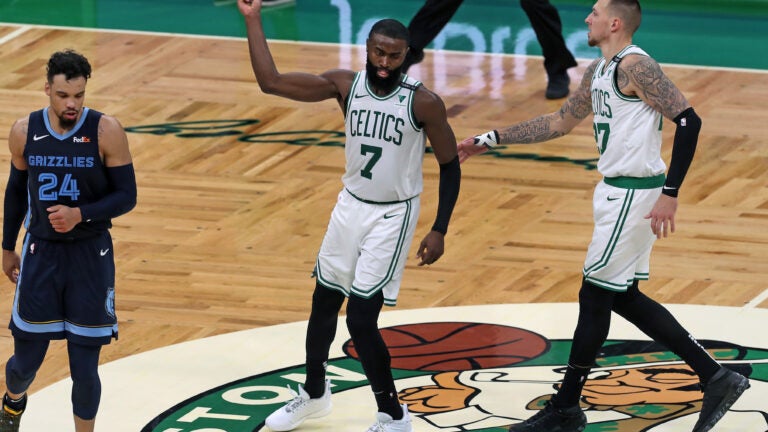