Embiid dominated the Celtics for a second consecutive game on Friday, as the Philadelphia 76ers pulled away in the second half for a 122-110 victory.

Tristan Thompson just doesn’t have anything for Joel Embiid.

Embiid punished the Celtics in the paint and worked his way to the free-throw line 15 times. His numbers — 38 points on 11-for-15 shooting — were nearly as ridiculous as Wednesday, and nothing the Celtics tried slowed him down in the slightest.

Prior to the season, the hope for the Celtics was that Tristan Thompson could play Embiid 1-on-1, but that simply isn’t feasible. Thompson is strong, but he’s not tall enough to contest when Embiid extends fully (and he might not be strong enough either, frankly). Before the game, Brad Stevens admitted to Brian Scalabrine that the Celtics don’t have the pure muscle to handle Embiid like they did in the past — presumably a reference to Al Horford and Aron Baynes. Even last season, the Celtics had Enes Kanter, who was big enough to bump back.

Now, it’s less clear what Boston can do. The best option might be to double team and scramble, but the Sixers have loaded up on shooters and are much better equipped to deal with that strategy (Seth Curry, somehow, is shooting nearly 60 percent on 3-pointers alone this season).

Maybe it’s time to give Tacko Fall a chance?

Jaylen Brown appeared to be completely fed up with Embiid’s antics.

On Friday — perhaps egged on by Marcus Smart’s implication that he “flails” in search of fouls — Embiid’s dominance might have been a little more personal. He snarled after every basket and appeared to be searching for calls, throwing his arms up at any contact with an incredulous look at the officials.

At one point, Embiid and Brown appeared to exchange words while Embiid was at the free-throw line, and the Sixers star approached Brown to say something else. Brown’s face remained blank, but he immediately scored consecutive aggressive baskets at the rim, and he appeared to play with more of an edge the rest of the way. At one point, he swatted Ben Simmons’s shot away and stood over the Sixers’ forward for a long moment before offering a hand (Simmons declined).

Brown finished with 42 points on 28 shots. Getting Tatum back will be big, but Brown is a true star at this point. The story of the next few weeks will be watching how Boston tries to maximize the trio of Tatum, Brown and Kemba Walker.

Once again, Walker — whose minutes restriction was lifted to 25-28 minutes — looked fast and healthy, scooting around screens and finding space in the defense for a variety of shots.

Over the years, Walker has developed an impressive layup package — a byproduct of being a high-usage scorer who checks in under 6 feet. His surprise layups are an entertaining part of his bag — Walker is great at catching a towering big man off guard and flipping a shot up off the glass.

What an absurd finish by Kemba. pic.twitter.com/TlltA3JzNp

Scoring over a player as big as Embiid requires some creativity.

The Celtics lost Embiid-less minutes in the third quarter.

After the game, Stevens expressed disappointment in Boston’s execution down the stretch. Beating the Sixers when they are beatable would be a nice start.

The Celtics’ rookie guard went down with what the Celtics called a knee sprain in the first half, crumpling to the ground after Brown was pushed into his leg. Pritchard appeared to be in quite a bit of pain, and he was helped off the floor without using any weight.

The Celtics announced Pritchard suffered a knee sprain. Brad Stevens had no updates after the game and said he expects more tests will follow in the coming days. 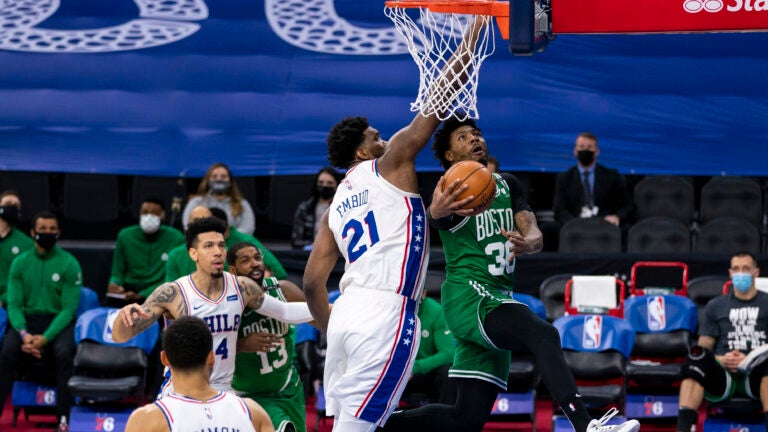