Six takeaways as the Celtics got back in the win column.

Sometimes when a player goes off, you can see how difficult the game is. Other times, a player looks so dominant individually, he makes the defense look nearly non-existent.

Brown’s performance on Sunday was the latter. After a strong start, Brown made Cleveland’s defense (which we will get to in a minute) look foolish. He drove directly at the rim repeatedly in both half-court and transition sets and converted layup after layup. When the Cavaliers finally closed off the lane, Brown started splashing both mid, and long-range jumpers. As noted by Jay King of The Athletic, Brown became the first player in NBA history to score 33 points in 19 minutes or fewer.

If Jaylen Brown doesn’t play again after checking out late in the third, he’ll become the first player in the @bball_ref database (dating back to 1983-84) to score at least 33 points in 19 minutes or fewer. Paul George (37 points), Kiki Vandeweghe (36) have done so in 20 minutes.

Brown’s All-Star candidacy is all but a foregone conclusion at this point. What else can he earn?

The Celtics obliterated a top-ranked defense.

After losing consecutive games to the Sixers last week, Brad Stevens gave his players something of a wake-up call.

The Celtics responded on Sunday, locking up a Cavaliers’ offense that beat the Brooklyn Nets twice in a row last week. Interestingly, however, it was Boston’s offense that did most of the work. The Celtics ran roughshod over a Cleveland group that had the fifth-best defensive rating in the NBA prior to Sunday’s game.

The Cavaliers’ defensive numbers were probably a little noisy — with all due credit, their top-five players are not elite defenders. Still, this far into the season, the Celtics scored 141 points against a much-improved defensive team.

Aaron Nesmith needs to see a couple shots go down.

The Celtics’ rookie got a few minutes in the second quarter as the Celtics raced out to a big lead and went 1-for-3 from behind the arc. One of his attempts was an airball. Another looked very uncomfortable.

Nothing takes a shooter out of rhythm like spotty minutes, and Nesmith’s minutes have been very spotty. In the second half, Nesmith looked more comfortable burying two 3-pointers, and he has shown little flashes of his game beyond just spot-up shooting, which is an encouraging sign.

Still, if the Celtics hope Nesmith can contribute this season (an open question at this point), it might help to get him some real minutes. Rhythm matters quite a bit.

Carsen Edwards dropped 18 points. What should we make of it?

Don’t take too much away from the pure numbers in Edwards’ big evening, most of which came in garbage time. He’s a streaky scorer at times even when he gets consistent minutes, and the game was decided when he started scoring.

Much more important for Edwards: He seems to have earned some trust from Brad Stevens. Earlier this season, Stevens noted that Edwards was one of the players who has impressed with effort and tenacity in practice.

Edwards also has shown a much-improved layup package, which is crucial for him. He needs to be able to score even when he isn’t white-hot from 3-point range. Collapsing the defense and showing some touch would be big.

The double-big lineup was great (don’t expect it to continue).

If the Celtics played the Cavaliers every night, perhaps the double-big lineup — outscored by 19.8 points per 100 possessions this season prior to Sunday’s game — could have salvaged its numbers. Daniel Theis and Tristan Thompson finished +32 and +34 respectively in their minutes, which was a big boost against a Cleveland team with a ton of size.

Kemba Walker will not play against the Chicago Bulls on Monday.

The Celtics take on the Bulls on the second night of a back to back on Sunday. Per Brad Stevens postgame, Kemba Walker is not expected to play. The Celtics’ full ensemble of stars will have to wait. 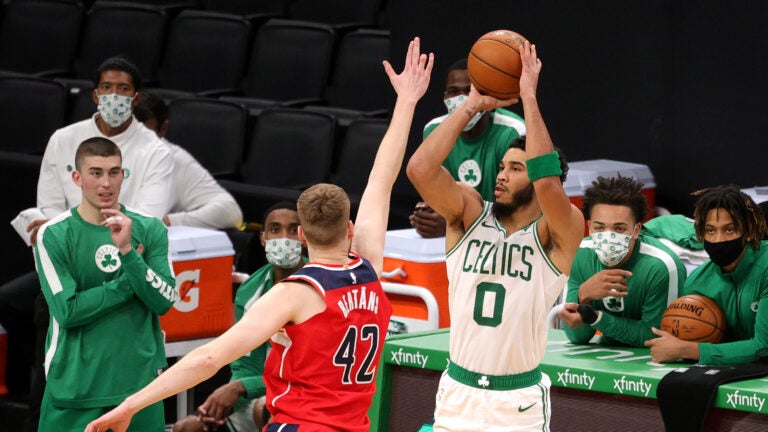