The Boston Celtics finally had all four members of their core four back together — Kemba Walker, Jayson Tatum, Jaylen Brown, and Marcus Smart — but a disastrous second quarter doomed them in a 110-106 loss to the San Antonio Spurs on Wednesday.

Here are five takeaways from a roller-coaster game.

The Celtics got a great look to end the game.

The Celtics did a lot to lose Wednesday’s game prior to the final minute — inefficient shooting, ill-timed turnovers, and questionable defense — but they had a final chance to send it to overtime. With eight seconds remaining, Kemba Walker ran up the floor and dished to Tatum with time winding down. As San Antonio’s defense rotated, Marcus Smart sprang free in the corner. His final shot was slightly off, and the Celtics couldn’t extend their winning streak to three.

Brad Stevens played a 12-man rotation in the first half.

With all of his best players back on the floor for the first time, some might have wondered whether Brad Stevens would shorten his rotations.

The opposite was true. Stevens played 12 players in the first half, and by the time the game was over, the only two who didn’t enter the game were Tremont Waters and Tacko Fall. As Brian Scalabrine noted on the NBC Sports Boston broadcast, Stevens may have been trying to see who he wants in his eight-man rotation. Carsen Edwards was the first sub off the bench. Aaron Nesmith got early minutes.

But the actual result appeared to be that Boston was out of sync and uncomfortable. The Celtics blew a nine-point lead in the second quarter and after a truly disastrous final minute of the period (more on that in a minute), they trailed by 14 at halftime.

At some point, the Celtics will have to trim down their rotation. Wednesday’s film won’t offer many answers.

The Celtics’ zone got them back in the game.

To recap that final minute of the first half:

The Celtics didn’t gain much traction as the third quarter opened, but when they dropped into a zone, San Antonio’s offense — which clicked whenever the Celtics played man-to-man — suddenly seemed hesitant and uncertain. The Spurs were forced to make plays individually, which is less their strong suit outside of DeMar DeRozan.

The other element of Boston’s rally that was worth noting: Tatum — who had an inefficient evening — finally got himself going with a series of post-ups in the third quarter. On a night when he simply couldn’t find the range (he went cold again after helping the Celtics work back into the game), Tatum has one very reliable way to get a decent look whenever he wants.

Post-ups shouldn’t be the bulk of Tatum’s offense — he’s too good at getting to the rim and creating 3-point shots. But when the defense closes off the paint and defenders hang all over him behind the arc, being able to utilize elite footwork and soft touch in the post is a great tertiary option.

The Celtics have a lot of bigs who are about as good as each other.

Robert Williams is in a tough spot.

On Wednesday, the Celtics started Daniel Theis, who has been playing out of his mind recently. Tristan Thompson, who came off the bench early, is in theory a perfect fit still finding his way (Thompson also was paid the entire mid-level exception, which could be a factor as well).

Meanwhile, Williams is dynamic in ways that Theis and Thompson can’t boast. His energy on the glass is impressive, his athleticism might be unmatched even in the NBA, and opposing players are starting to get the message that he can swat anything.

Stevens has said that one of the reasons he liked the sometimes-disastrous two-big lineup was that it gave Williams a chance to claim more minutes off the bench. The Celtics also like to use big men based on matchups. But the 12-man debacle in the first half of Wednesday’s game might be a reminder that sometimes rhythm matters as well as matchups. 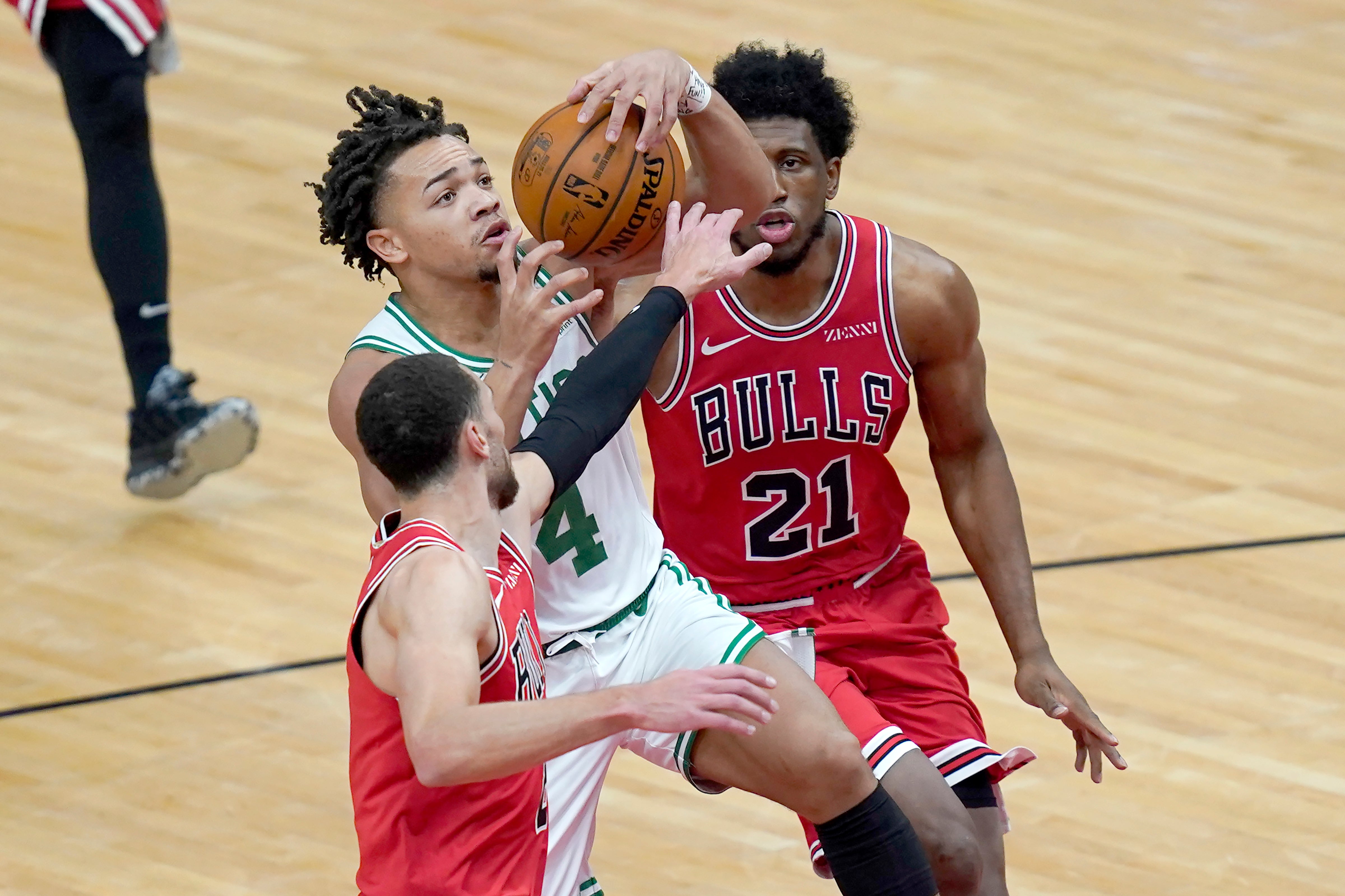