The Boston Celtics lost a game against the Los Angeles Lakers on Saturday, falling 96-95 after a wild finish. Pending the results of a reported MRI on Sunday, they will hope they didn’t lose something, or someone, much more impactful.

The final seconds were chaos.

With time running down in the fourth quarter, the Celtics forced a Lakers turnover trailing by just one. Chaos ensued, as the Celtics fumbled the ball around until it finally found its way into the hands of Kemba Walker.

Walker had a rough game (more on that in a minute), but he had an open mid-range jumper with a chance to win the game and completely redeem himself. But Walker’s shot fell off the rim, and the Lakers pulled out the win in wild fashion.

For a lengthy stretch spanning the second and third quarters, Jaylen Brown didn’t miss a shot — burying nine in a row. As has been the case all year, Brown made a variety of shots including driving layups, mid-range jumpers, and a rhythm triple. Perhaps the most impressive part of Brown’s rise this season has been his complete scoring package, and the Lakers — who don’t have much wing defense — could do almost nothing to stop him.

The same was true of Jayson Tatum. Brad Stevens played both Brown and Tatum for the entire third quarter, minus a brief break for Tatum. The result? A 12-2 run to end the period that boosted the Celtics’ lead to 78-71.

On paper, Walker would be a perfect complement to Brown and Tatum against the Lakers — a quick guard great against the pick-and-roll, who can punish bigs and capitalize on the attention paid to Boston’s star wings.

But Walker struggled badly from the field, finishing with four points on 1-for-12 shooting. Several of his looks were clean and in rhythm, which made the misses even more jarring. He wasn’t really beating the Lakers off the bounce, and the sneaky layups that he often gets on the glass against bigger defenders weren’t fooling anyone.

The Celtics, who got nice games from Brown and Tatum, could have used a boost from Walker, especially after Smart went down (more on that in a minute). Walker certainly wasn’t alone in his struggles — only Theis and Robert Williams hit double figures aside from Brown and Tatum. But Walker’s offense was lacking at a bad time.

Semi Ojeleye was a key part of the second-quarter rally.

The Celtics were faltering early in the second quarter and looked like they might be on the verge of falling behind by an uncomfortable amount when Montrezl Harrell cashed in a mid-range jumper that put the Lakers up 10.

Then Brad Stevens — who has taken a lot of flack from Celtics fans for his lineups this season — went with an intriguing group against the Lakers: Tristan Thompson (for size against Harrell), Tatum, Brown, Semi Ojeleye, and Marcus Smart. That group — with three big wings for switching purposes — helped the Celtics climb back and tie the game before the Lakers went up by three at the break.

Instrumental to that unit’s success: Ojeleye, who was able to slow both LeBron James and Anthony Davis when he returned to the court. Ojeleye has impressed on the offensive end this season, but on Saturday, he impressed in more traditional ways — utilizing his size and mobility on the defensive end.

The primary story for the Celtics: What happened to Marcus Smart?

Early in the fourth quarter, Smart appeared to take a bad step underneath the Lakers’ basket and crumpled to the floor, screaming an expletive. The Celtics immediately called timeout, and trainers rushed out to help Smart off the court. Supported by two trainers, Smart hobbled to the locker room, putting no weight on his left leg.

The Celtics ruled Smart’s injury a “calf strain.” Per ESPN’s Adrian Wojnarowski, Smart will undergo an MRI on Sunday.

Here’s the clip of Smart’s injury — looked to grab the calf area. pic.twitter.com/u549yMrq37

The Celtics can’t afford to lose their top defender. Sunday’s results could be enormous. 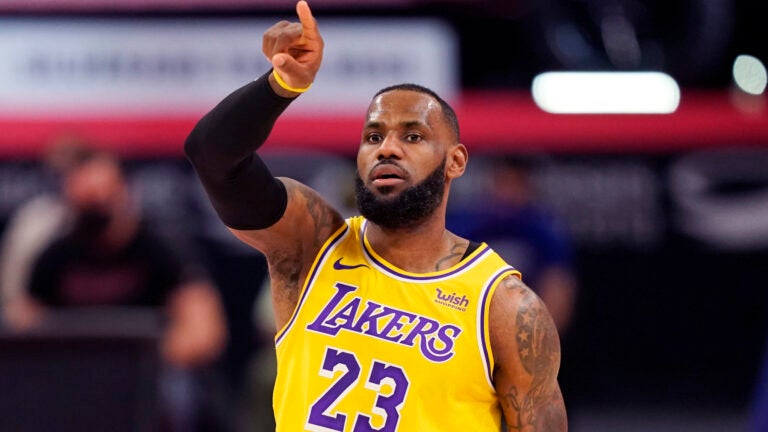 Celtics vs. Lakers: Facing LeBron James, Brad Stevens has ‘learned not to doubt the greats’