Getting mighty lonely over here The Celtics Will Be Fine island.

As far as I can tell, it’s just optimistic me, a couple of other accused “Green Teamers,” and a well-worn official NBA basketball we’ve named Spalding, who sometimes talks hoops with us and might be an upgrade on Brian Scalabrine on NBC Sports Boston’s broadcasts.

Yep, the population is dwindling here on the ol’ isle, and with good reason: This team is actively encouraging abandonment with its recent performance. It’s like they’re trying to convince sports fans who favor basketball as a winter sport to turn their attention to the exciting and fun Bruins right now.

Since their 8-3 start, the Celtics have provided little indication than any faith in them to reach the Eastern Conference finals for the fourth time in five seasons will be rewarded. They’re 7-12 since, dropping to .500 on the season and into the sixth slot in the conference standings.

They’re a half-game up on the Knicks and Hornets, and that is not the mediocre company they were supposed to be keeping. But it’s where they deserve to be.

The back-to-back losses to the Pistons and Wizards a little over a week ago were supposed to be the low point. Turns out their talent for finding even lower depths was underestimated.

After Sunday’s loss to the Pelicans, during which the Celtics bricked away a 24-point lead with less than 19 minutes left in regulation before losing in overtime, all vitriol aimed their way is deserved.

That loss wasn’t just ugly. It was something worse. It was in character for who they are right now. It was predictable.

They’re exasperating to watch, bordering on the insufferable. You can’t even enjoy watching them build a big lead, because you know once that happens their best players are going to go into I’m-gonna-get-mine mode, the lead will shrink and shrink and shrink until it’s been whittled down to nothing, and by the time the Celtics start moving the ball again, momentum has fully shifted against them and they’re in a fight to the finish.

Don’t take this to mean I’m giving up on them for this season. Oh, I’m riding it out on the island. Any suggestion that Danny Ainge is bad at his job or Brad Stevens should be in danger of losing his shows a complete lack of perspective and context. I do believe they’ll get it repaired, and the end of the season will be a heck of a lot more interesting than this.

This miserable stretch – which, believe it or not, was supposed to be the soft portion of the schedule — may well be forgotten by the time this season is in past tense. But that makes it no less annoying now, in real time. The fan base’s frustrations – stoked by the usual sports radio antagonists’ talent for turning a spark into a five-alarm fire – must be acknowledged. No one is enjoying this. It’s understandable that fans’ faith has been dented like the divot Zion Williamson left in Tristan Thompson’s sternum.

So how do they get out of it? One answer is obvious: They need Marcus Smart to return to health. That is not an excuse. It’s a reason. Ask yourself: What are they missing right now (besides a lot of shots)? Consistent defensive intensity is high on the list, right? There is no more consistently intense defensive guard in the league than Smart. I guarantee you he would have made a play – a charge taken, a pass swiped, a jump ball won against a taller foe  – that would have made the difference between a we-can-exhale-now win and an agonizing loss against the Pelicans.

And that’s not even where they miss him the most. Smart gets little credit for being the Celtics’ best playmaker, but it’s true. He doesn’t always make the best decisions when it comes to his own shots, but his savvy is underrated in finding opportunities for his teammates.

And let’s admit it: This is not a great passing team. Jayson Tatum is an elite isolation player, but he’s not especially adept or willing to pass out of double-teams. The Celtics fell apart Sunday in part because the Pelicans trapped him, and he either tried to maneuver through it, or gave up the ball to someone who inevitably missed the shot.

Jaylen Brown has improved his passing, but he gets myopic in trying to create his own shot when his touches have been limited. Kemba Walker is a good passer, but he’s never going to be confused with Steve Nash, and he’s too busy trying to shoot his way out of his own struggles to settle into the third-option/initiator role that would best serve this team. Smart makes better players than him even better.

It’s extremely frustrating and an aesthetic disaster when the offense stagnates and the shots aren’t falling. If Ainge uses the trade exception, I hope it brings in a versatile player with some willingness and skill in moving the ball. They miss Gordon Hayward dearly in that regard. (FYI, the Kings’ Harrison Barnes averages 3.4 assists per game, 0.7 fewer than Walker.)

Other than using the trade exception, and perhaps making a small alteration here and there (Jeff Teague is a detriment, and what is Tremont Waters doing on the roster if he can’t play ahead of him?) I think patience is the play here. They need Smart desperately, but they must make sure that calf injury is fully healed.  Stevens needs to give Robert Williams – who gets much-needed easy buckets beyond his defensive presence – consistent time while also making sure he’s healthy for the season’s end this year. And they need to let hustling Aaron Nesmith play through his mistakes.

This team has been irritating for a couple of weeks now. Often they’ve been infuriating. Stevens has much to solve. The view from here on the island: It will be solved. But after Sunday, we sure do understand why you have to see it to believe it. 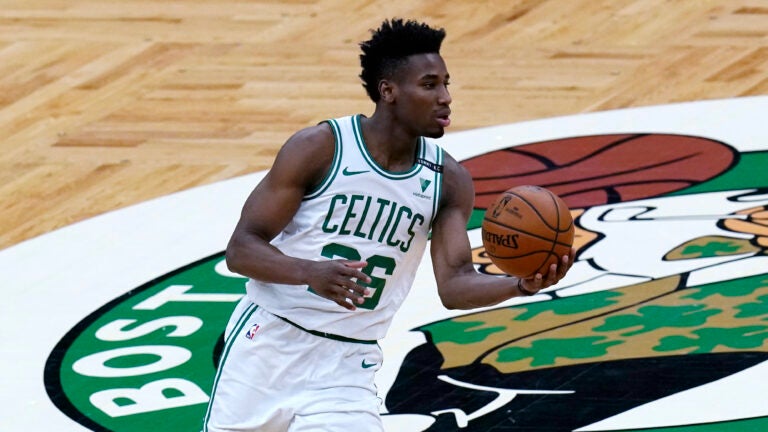