After the Celtics suffered a humiliating 127-112 defeat to the Hawks on Wednesday — Boston’s third loss in a row, dropping the team’s record to 15-17 — president of basketball operations Danny Ainge called in for his weekly interview on 98.5 The Sports Hub’s morning show, “Toucher & Rich.”

Amid a conversation that covered a range of subjects pertaining to the Celtics’ current struggles, Ainge made a blunt admission.

“We’re playing terribly,” he said. “We don’t have a good enough team in my opinion.”

Part of the issue stems from the shortened offseason during which Gordon Hayward left the Celtics in a sign-and-trade with the Hornets. Other rumored deals involving the 30-year-old fell through.

In reflection, the longtime Celtics executive had equally strong criticism of his own performance.

“I’ve made mistakes,” Ainge said after being asked if he had regrets. “There are things I wish I would’ve done better and thank goodness we live in a world of basketball and there’s way to rectify it, although usually those ways aren’t overnight. They take time.”

Despite the turmoil, Ainge doesn’t believe any of it is derived from behind-the-scenes drama amongst the team itself.

“No, definitely not,” he answered when asked if there was any issue between players or coaches. He also backed Celtics coach Brad Stevens, dismissing the notion of players tuning him out.

“When I hear a player or a coach is being tuned out, that’s usually from a coach that’s doing nothing but screaming and yelling,” said Ainge.

Here’s a look at some of the topics Ainge covered in his interview, including Boston’s pair of All-Stars handling a new level of scrutiny, and the potential for trades prior to the March 25 deadline.

He shared his thoughts on the team’s current problems.

For the Celtics, it’s not just that the team is currently immersed in a three-game losing streak, but that none of the teams Boston lost to during the stretch are currently above .500. And as a result of the skid, the Celtics are also now below the .500 mark, a first after this many games in a season since 2014.

“It’s hard to explain,” said Ainge. “I mean we talked last week about the intensity level and how it hasn’t been there. I don’t have an explanation. The team is not playing well, we’re not playing hard consistently. We have great stretches most games, with exception to last night. We didn’t have any good stretches until the game was over with six minutes to go in the game and the guys that don’t get to play very much got to play.”

Despite the string of setbacks, Ainge remains confident that the Celtics are capable of better play.

“I still am a believer that our team can make a run, just like Dallas has made a run, and Washington recently made a run,” Ainge offered, noting the increased level of parity across the league in what he described as a “very strange” 2020-2021 season.

“Every team is close to .500 minus the top six or seven teams right now,” Ainge explained. “They’re all hovering around [.500]. Miami was in the Finals last year. They’re under .500. And losing to Miami…that would not be a slam depending on which Miami you’re getting. I just think that it’s an interesting year. I wish I had answers for you. I don’t. I do believe in my players. I like all of them individually. I think they all have good futures.

“I just think that right now our team is in a major funk, and I don’t know all the answers as to why,” said Ainge. “I wish they were playing better, for them and for our fans.”

On the subject of Celtics All-Stars Jaylen Brown and Jayson Tatum, Ainge was asked what he thinks about the idea that the duo — prolific scorers as they are — have also had a deleterious effect on the ball movement in the offense. Specifically, that Brown and Tatum are “ball-stoppers,” halting team passing to force their own shots.

“I think it’s unfair to just say that they’re ball-stoppers,” Ainge explained, adding that the conversation around the two players goes deeper than offensive usage.  “The biggest thing about Jaylen and Jayson is they’ve been shielded before because they’ve had other really good players and veterans around them as they’ve developed and gone to three out of four Eastern Conference [Finals]. Now, it’s on them. Now they’re the stars, and they got the big contracts, and they got the All-Star nods, so the microscope is on them.”

Ainge credited Brown, 24, and Tatum, 22, for their poise in the current crisis.

Comparing offenses designed for “great players like Paul Pierce and Kobe Bryant,” Ainge said that Boston does allow its stars to “stop the ball.”

“I think its’ a little bit unfair to just hold the ball-stoppage on them, but I understand it and I think that they will get better at it,” said Ainge. “I think that we need to surround them with more scoring off the bench, we need guys to play with more swagger and confidence and that aren’t subservient to Jaylen and Jayson, and will go out and play their game also and just let it go.”

Ainge blamed himself for the larger issues with the current Celtics roster.

“This is a me problem,” Ainge concluded. “And I’m saying that I love my two young guys. They’re not perfect and they’re learning, and this adversity is part of their growth and development, not intentionally, it’s just the nature of the beast.”

What he had to say about the possibility of a trade

Having claimed blame for the Celtics’ issues, Ainge was also asked how he might try to alleviate the problems with a potential trade.

On Wednesday, Celtics owner Wyc Grousbeck also did an interview on 98.5, alluding to the possibility that Boston may not use the large trade exception it got in exchange for Hayward’s departure until the summer.

Ainge was asked if it was tacit admission that the team was giving up on the current season by potentially waiting for the offseason to use the Traded Player Exception.

“No, I wouldn’t say that,” Ainge answered. “What I would say the timing is important. We would use that trade exception if the right deal came along, but I think that what Wyc is probably saying is — because we’ve talked about this a lot internally — is that the most likely scenario of a deal that we would want would come along in the offseason as opposed to the here and now. Doesn’t mean we couldn’t use portions of it at this point, but that might prevent something bigger in the offseason.”

As for addressing the team’s short term problems with a possible trade, Ainge reiterated that “I don’t have those answers and it’s probably not the time that it’s going to be answered.”

Still, with a month to go before the trade deadline, Ainge didn’t rule anything out.

“We’re talking and we’re trying to do some things,” he said of a possible trade. “We’ve been close a couple of times. I don’t know the answer. Time will tell.” 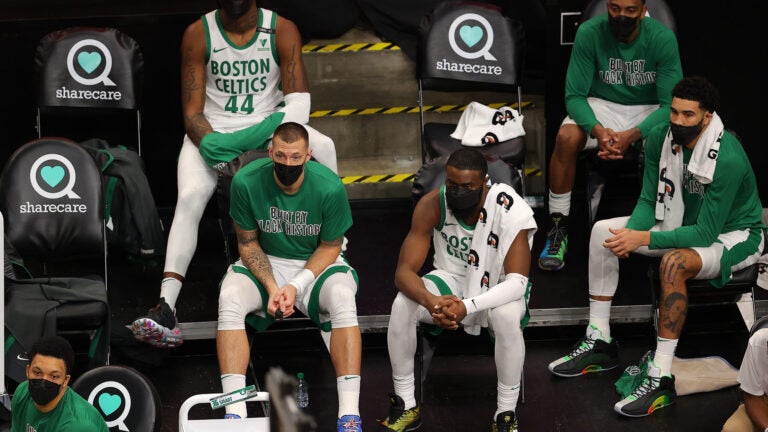