After Thursday’s victory over the Toronto Raptors, Celtics wing Jaylen Brown was informed that LeBron James selected him to his All-Star team, calling him “Jaylen Under-Appreciated Brown” on the TNT broadcast.

Brown raised his eyebrows at the recitation of James’s compliment and chuckled.

Brown’s season deserves appreciation. The fifth-year wing — and first-time All-Star — is averaging 24.8 points per game on a tidy 49.8 percent shooting, including 38.9 percent from 3-point range. Brown started the season hot and has been one of the league’s best mid-range shooters while aggressively going to the basket. On Thursday, he worked his way to the free-throw line 16 times, making 11.

Brown leads the Celtics in minutes at 1,082, closely followed by fellow All-Star Jayson Tatum at 1,072. The condensed nature of those minutes means the impending break couldn’t come at a better time for the duo.

“JB and JT, man, they’ve been logging a lot of minutes and there’s been a lot of pressure on them to carry us for mainly the whole part of the season,” Jeff Teague said. “So I think it’s a good break for them.”

Still, Brad Stevens noted after the game that the All-Star break is unique in that players and coaches can’t completely shut themselves down, and Tatum and Brown will both participate in Sunday’s All-Star Game, as well as the 3-Point Contest. Brown was asked if he and Tatum — who were selected to different All-Star teams on Thursday — will wager anything on the game.

“Hey man, you trying to get me caught up or something?” Brown said, chuckling through his mask. “I definitely can’t — there will be no official wagers. But with me and JT everything is definitely a competition. So I’m looking forward to competing and playing and sharing the floor. Just tell him don’t guard me. That’s all I’m going to say.”

Tatum, meanwhile, will take the court with his childhood friend Bradley Beal. Tatum and Beal both grew up in St. Louis, and both attended the same high school, but the duo has never played on the same team in an organized game.

That changed on Thursday when Kevin Durant selected both to be members of his starting lineup.

“I was excited,” Tatum said. “That’s what I was hoping for all along. Everybody knows how close we are and the history we have, and it’s just a really special moment. Two guys from the same high school, same neighborhood, kind of grew up together, starting in the All-Star game from St. Louis, it don’t get no better than that.”

Tatum added that Boston’s four-game winning streak allows the team to enter the break with a little more confidence.

“It definitely makes going down there a little more enjoyable knowing that we kind of finished off the right way,” Tatum said. “Now going into the break, we can take some time off and enjoy whatever we’re doing, enjoy the All-Star game, so for sure going to feel better flying down to Atlanta in a couple of days.” 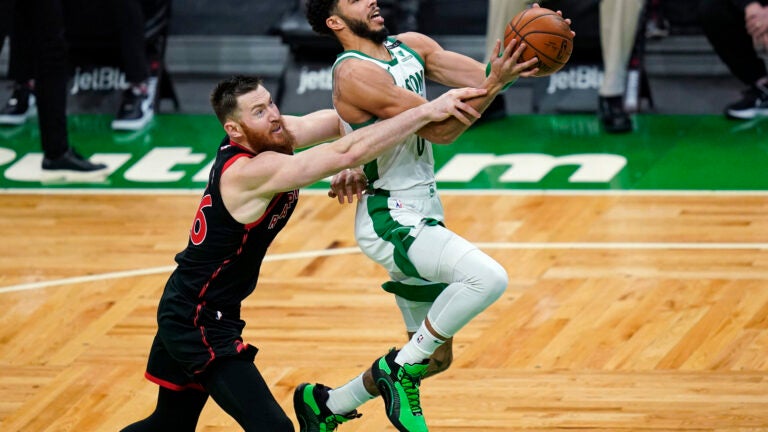