The NBA trade deadline is coming up March 25, and the anticipation for Danny Ainge to do something is palpable. The Celtics president of basketball operations has a $28.5 million traded-player exception he can use to improve a Celtics’ roster that for a variety of reasons lacks quality depth.

Though the TPE can be carried over into the summer, there is an expectation that Ainge, the Celtics’ president of basketball operations, must wield it now from a vocal element of the fan base, one that has forgotten how to find any satisfaction in seasons that do not end with a parade.

If he does not use it to make a major move, there will be much caterwauling from these folks, and many hours spent waiting on hold in order for 20 seconds of on-air glory on their sports radio program of choice. Maybe 30 seconds, if their take is especially pessimistic.

I’m dreading hearing this if Ainge doesn’t make a notable deal. But from a big-picture standpoint with the Celtics, I’m almost certain I’ll be relieved if Ainge passes on making a major move and instead adds secondary pieces at a low cost.

Here’s why, or actually, the whys:

— Even with a trade for one of the bigger names potentially available – say, Magic center Nikola Vucevic – the Celtics will not be a true championship contender this season. There’s no obvious deal that suggests it would vault the Celtics into that Sixers/Bucks/Nets tier in the Eastern Conference. Fans want Ainge to make the trade now that he should have made last year, when Gordon Hayward was still here, and the path in the East wasn’t as daunting.

— The mission should be to build around 24-year-old Jaylen Brown and 23-year-old Jayson Tatum, already legitimately outstanding players – they combined for 43 points in Sunday’s All-Star Game – who have made steady and usually conscientious improvement in their careers.

— Making a trade for an established name right now who is an uncertain fit long term would be detrimental, especially if it costs the Celtics certain young players who are capable of complementing Brown and Tatum on the next great Celtics team.

I doubt I’m alone in resisting any suggestion that the Celtics should be willing to give up Robert Williams III in a deal for a player like Vucevic. Watching Williams’s ascent – as an overall player, and in the micro sense, when he rises up to swat a shot or finish off an alley-oop – has been the most satisfying aspect of this weird season so far. In his third season, Williams is more than a fan favorite. He’s becoming a weapon. It’s almost as if he’s rewarding patience.

I do, however, suspect I’m on a thinly populated island when it comes to the desire to retain Romeo Langford and Aaron Nesmith, even if it means missing out on a steady veteran who would help immediately. The last two No. 14 picks in the draft – Langford before last season, Nesmith before this one – have done little as NBA players so far. Langford has played just 32 games – none this year as he recovers from wrist surgery – in his career, averaging 2.5 points per game and shooting 35 percent from the field. Nesmith has struggled in just about every way a rookie can.

That does not mean that they are busts. And I don’t believe they are. Langford’s injuries are troubling, but even in limited time as a rookie, he was a willing defender and smooth slasher to the hoop. Brad Stevens was prepared to give him a major chance in the Eastern Conference Finals against the Heat, bringing him into Game 2 against the Heat less than five minutes into the game. He lasted 81 seconds before tearing an adductor muscle that ended his season. But there are real signs that he can be the wing help to complement Tatum and Brown in the coming years.

The same goes for Nesmith. He’s struggled with his shot (39.7 percent) and tends to get lost on defense, but he hustles, and once the game slows down for him a little bit, he’s going to be a quality 3-and-D player. We’ve seen signs – he had 13 points in 14 minutes recently against the Hawks. He would have benefited greatly from summer ball and a normal training camp. It makes sense that the adjustment to the pro game has been easier for Payton Pritchard, a four-year starter in college.

Langford and Nesmith can become important contributors to the Celtics when Brown and Tatum are the heart of their prime in a couple of years. It takes time with all young players. Chauncey Billups bounced from Boston to Toronto to Denver to Orlando to Minnesota before becoming Mr. Big Shot with the Pistons.

The 2001 Celtics traded rookie Joe Johnson, who showed flashes of excellence some nights and was unnoticeable on others, to the Suns for Tony Delk and Rodney Rogers. Delk and Rogers helped the Celtics reach the conference finals. Johnson, the 10th pick in the ’01 Draft, made seven All-Star teams in 17 seasons.

I’m not saying Langford and Nesmith will ever be at that level. But I think sometimes fans lump them in with the later picks on the roster – Grant Williams, Tremont Waters, Carsen Edwards, etc. – when they have far more promise and basketball pedigree.

Really, this comes down to Ainge’s evaluation of them, and whether he is as hopeful about their futures as he was when he drafted them. I believe the answer is affirmative. There are names being bandied about that would help the Celtics in the short term, and maybe even a little bit longer, but at what price and to what payoff?

I could be talked into Sacramento’s versatile, respected Harrison Barnes, provided Ainge sent the Kings a haul of future picks as the primary enticement. Cleveland’s Larry Nance Jr. would be a good fit at a reasonable cost. Chicago’s 32-year-old Thaddeus Young would aid the cause for now, but he’d be much more appealing if he were four years younger.

But this is no time for a quick fix that mortgages the future. Not in a season in which a Finals run would require significant injuries striking roughly a half-dozen other Eastern Conference teams. This isn’t the Celtics’ year. It’s OK, even encouraged, to be realistic, while recognizing there’s good reason for optimism. Two reasons, actually. We saw them in the All-Star Game Sunday.

Ainge should hit this trade deadline with the idea of putting together the best Celtics team in a year or two, not right now. And if he really must have a veteran presence, hey, some guy named Joe Johnson was pretty good for USA Basketball’s AmeriCup Qualifying team a few weeks ago. 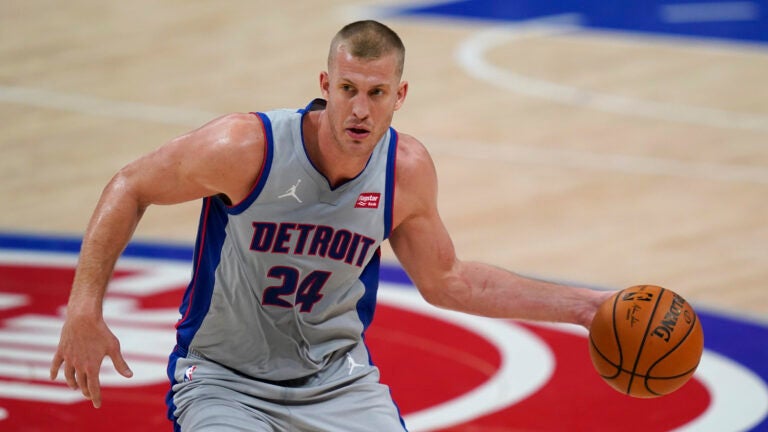