Tristan Thompson spent the first nine seasons of his career with the Cleveland Cavaliers before signing a two-year deal with the Boston Celtics this summer.

Now, according to Yahoo! Sports’ Chris Haynes, Thompson could be on the move again. In a new column on Yahoo!, Haynes reported that the Celtics could trade their starting center before the NBA’s March 25th trade deadline “with the Toronto Raptors being a possible destination.”

Thompson, who turned 30 last week, was born in Toronto. He had a rocky start to his tenure with the Celtics (understandable given the lack of a full training camp), but he has been solid in recent weeks and has boosted his per-game averages to 7.9 points and 8.4 rebounds.

Two things have worked against Thompson in Boston, however: The emergence of Robert Williams as a potential contributor now and the emergence of Joel Embiid as an MVP candidate in Philadelphia. Williams’ recent play has demanded more minutes — he’s blocking more than three shots per 36 minutes and has shown flashes of really impressive passing vision in addition to his high-flying dunks.

Embiid, meanwhile, has punished the Celtics in both of their meetings this year. That’s hardly Thompson’s fault — Embiid has spent the first half of the NBA calendar punishing nearly everyone. It does, however, call into question how useful Thompson is for a Celtics team that has a solid big rotation without him and little wing depth on the perimeter. Thompson was acquired in part to deal with bruising centers, but the NBA’s most bruising center seems to be too much for him at this point.

How the Celtics might structure a deal with the Raptors remains to be seen. If they could pry away former Celtics big Aron Baynes, they might be happy — against Toronto this season, Embiid has shot just 32 percent. Baynes always played well against Embiid in Boston.

Other teams could have interest in Thompson as well — despite his awkward fit with the Celtics, he remains a useful big man. Danny Ainge will have bigger priorities as the deadline approaches, but Thompson’s status is certainly worth watching. 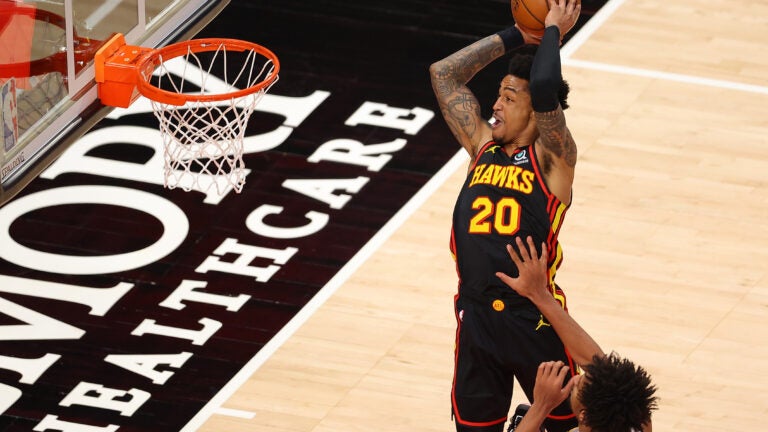 Celtics reportedly interested in John Collins, although price is ‘steep’ for Hawks forward