The Cleveland Cavaliers snapped a four-game losing streak on Wednesday, beating the Boston Celtics 117-110 and dropping the Celtics to 1-3 since the All-Star break.

The Celtics started sloppily and fell behind by as many as 21, then closed tired on the second night of a back-to-back.

In the middle, the Celtics played pretty well — battling back and nearly evening the score against the Cavaliers in the second half. Cleveland’s young stars, however, scored just enough down the stretch to send the Celtics back to Boston with a disappointing loss.

Sexton scooted past Celtics defenders seemingly at will and buried 3-pointers during Cleveland’s ultimately decisive first-half run. Down the stretch, he ran the show and made some clutch free throws.

As if the Celtics needed more reminders that things have gone awry, they couldn’t contain the player who was drafted with the Brooklyn Nets pick that was the centerpiece of their trade for Kyrie Irving.

The Celtics showed resilience down the stretch, but Wednesday’s loss was a bad one. A 20-point lead is difficult to overcome, and the hole they dug in the first half — even against a middling Cavaliers team — proved too deep. After a four-game winning streak entering the All-Star break, the Celtics are staring down a schedule packed with games going forward.

1. The Celtics made 20 free throws and shot 26.3 percent from behind the arc. The Cavaliers shot 43.5 percent from 3-point range and made 27 free throws. Add in a big early deficit and a tough loss to the Jazz the night before, and the Celtics’ fate was sealed.

“I thought we came out of the gate with really good effort and what happened was I thought we were affected by missing shots,” Brad Stevens said. “And you could see our body language change. They had several possessions there on their offensive end where we got them to the end of the clock, and we were really guarding with great effort and you could hear us, you could feel that effort. But then we were affected and then it took us a while to get that back.”

2. Jaylen Brown and Jayson Tatum did their part, even if neither was particularly efficient. Brown dominated at the end of the third quarter, scoring seven of his 28 points in two minutes to help lead the Celtics and trimming the deficit to single digits. Tatum scored 14 points in the fourth quarter en route to 29 points total.

Once again, Brown and Tatum did quite a bit to make the Celtics competitive, and once again, the Celtics just didn’t have enough production down the stretch. The Celtics are now 11-16 in crunch time (h/t to NBC Sports Boston’s Chris Forsberg) and once again proved to be one of the league’s worst teams in the fourth quarter.

3. No one stat can ever explain why a team won or lost a game, but the Celtics’ early deficit was due largely to the 13-2 advantage the Cavaliers enjoyed on points off turnovers in the opening minutes. Those numbers evened out a bit down the stretch (and Cleveland’s advantage in free throws and 3-pointers proved impactful late), but the Celtics’ sloppy play early came back to haunt them.

4. Robert Williams is an impressive offensive rebounder — he’s explosive off the ground on both his first and second jumps, which allows him to recover if the ball takes a weird bounce.

Williams finished with 13 points and 14 boards in a season-high 27 minutes. As the Celtics ramp up his minutes, they will benefit from the second-chance opportunities his athleticism creates.

“I thought in those big moments when they scored a couple times in the zone, and then a couple times late when he wasn’t in the game or he wasn’t the one challenging the shot, it didn’t feel like they had much impact at the rim,” Stevens said. “So obviously I need to get him in there as much as possible. I probably, to be honest, I should’ve played Tacko. He’s probably the other guy that could’ve impacted some of those rim shots better when Rob wasn’t in the game.”

5. Tatum has thrown down his share of poster dunks, but Isaac Okoro avenged Ben Simmons, Paul George, and LeBron James with a nasty slam late in the fourth quarter that helped the Cavaliers hold the Celtics off. 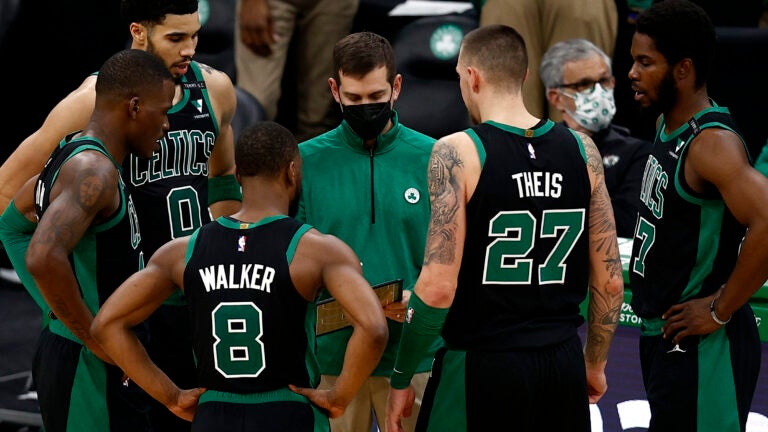