The Boston Celtics fell to the Memphis Grizzlies on Monday in overtime, starting their four-game road trip with a hard-fought 132-126 loss.

Jayson Tatum was a late scratch, and the Celtics felt his absence. The Grizzlies dominated the paint and stretched their advantage to double digits in the fourth quarter, and while the Celtics worked their way back and sent the game to overtime, Memphis had too much firepower in the final five minutes.

Still, as Brad Stevens said after the game: “The last two nights have felt more like Celtics basketball.”

Ja Morant made splashier plays, but Valanciunas dominated against the Celtics’ bigs and made several important plays in overtime. He’s not a modern stretch big man, but he’s a very difficult matchup for the Celtics.

The Celtics nearly overcame one of their worst defensive games of the season, a double-digit fourth-quarter deficit, the second night of a back-to-back, and the absence of Tatum and Kemba Walker (out due to knee management). Whatever you might think of the interior defense — and it was very, very ugly — the Celtics hung tough through four quarters.

You just aren’t going to win many games when you give up an 80-54 disparity in points in the paint or an 18-3 disparity in points off turnovers. You also won’t win many games shooting 62.5 percent at the free-throw line or surrendering 17 offensive rebounds. The Celtics had a laundry list of mitigating circumstances — the second night of a back-to-back on the road, no Jayson Tatum and Kemba Walker, etc. — but the interior defense was porous and the other issues ultimately proved too difficult an equation to solve.

1. Monday’s game was bizarre. The Celtics haven’t been particularly bad at the rim this season, but for whatever reason, they had absolutely nothing for Memphis. Morant paraded to the rim. Kyle Anderson slow-stepped into paint points. Jonas Valanciunas bodied his way through skinnier Celtics. Brandon Clarke floated in shots from a few steps from the basket. Then in the fourth quarter, like a football team that had established its run game, the Grizzlies started finding open 3-pointers that held the Celtics at arm’s length.

The Celtics answered Memphis’ onslaught in the first half with 3-pointers and battled back down the stretch, but they need to contest better around the rim.

2. Jaylen Brown and Jeff Teague deserve a lot of credit for keeping the Celtics alive. Brown finished with 27 points and made some big shots when the Celtics were floundering. Brown has talked often this season about how his opportunity is the only thing that has changed, and he has frequently proven himself as a go-to option for the Celtics when necessary.

Teague, meanwhile, scored 26 points as a member of the starting lineup. In an up-and-down season, Teague finished 10-for-12 from the floor and scored a pair of layups in overtime when the game was on the verge of getting away completely.

“We played some good basketball,” Brown said. “A lot of stuff that we added a lot of the cutting actions that we’ve been doing that have been good for us. A lot of teams will get confused when we come together and stuff like that. So we’ve got to keep that up. It makes the game easier for everybody and as we continue to get better at it, I think it’ll get better to be honest. I like the additions to the offense that we’ve had.”

3. Robert Williams had a nice stat line — 17 points on 7-for-9 shooting, six rebounds, and four blocks — and made a few crucial plays down the stretch to keep the Celtics in the game. Williams helped the Celtics at the rim as well — increasingly, teams are learning about his shot blocking.

“We just came in at halftime with emphasis,” Williams said. “Most of the players really they were getting too many layups, too many floaters. That’s where all their points were coming from, so just trying to come together and stop it.”

4. In a five-minute overtime, a couple of plays can make a huge difference. On Monday, the difference was shot-making and rebounding. Dillon Brooks made a difficult and-one pull-up against Brown, Grayson Allen nailed a corner 3-pointer as time expired on the shot clock with two minutes remaining to put Memphis up five, and the Grizzlies got a crucial offensive rebound down the stretch to kill more clock.

5. These two plays happened within roughly 10 minutes (real time) of each other.

JA MORANT COAST TO COAST ON EVERYONE pic.twitter.com/5M18bN2Qrp

Ja Morant catches and finishes the oop with the left 🤯 pic.twitter.com/BFS3IfJqGX

Morant wasn’t particularly efficient on Monday, but he is a one-man highlight show. 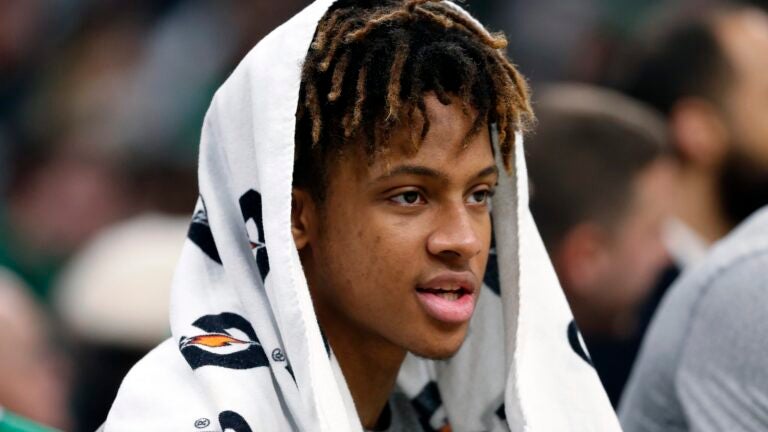