Well, Danny Ainge did something — a few things, actually — and the first of the deals should be immediately helpful.

Even if none of it feels especially satisfying.

The acquisition of Evan Fournier from the Magic for Jeff Teague, a pair of second-round picks, and a chunk of the Gordon Hayward traded player exception makes the Celtics better today than they were yesterday.

Fournier, a 28-year-old who is averaging a career-best 19.7 points per game and is shooting 38.8 percent from 3-point range, is a well-rounded offensive player and willing defender who fits what the Celtics need.

He can handle the ball, get to the line, and knock down open shots. They’ve needed someone like him off the bench all season. They could use another like him, actually.

Teague had had his moments lately, including a 26-point performance against the Grizzlies Monday. I bet you had no idea he’s shooting 46.4 percent from 3 this season. But the offseason free-agent pickup has been erratic at best, and his departure should open up more playing time for Payton Pritchard.

Javonte Green, also sent to Chicago, was a fun player to watch in the open court, but he’s one of three or four players on the roster who were replacement level at best. He was a good story, and hopefully he finds a niche somewhere. At least get the guy in the dunk contest one of these years.

If there’s a bummer among the moves Ainge did make, it was the one that sent Daniel Theis to the Bulls for Mo Wagner, a move that is little more than a luxury tax-motivated minor downgrade. His departure could mean that Robert Williams is about to take on a larger workload.

Theis, a versatile overachiever who always seemed to have the most thankless assignment, maximized his ability, something all of the Celtics haven’t been able to say in recent seasons.  Too bad that last shot didn’t fall. Too bad it wasn’t Tristan Thompson that was traded instead.

I do wonder if trading Theis and Teague is in part Ainge’s way of nudging Brad Stevens to play the younger players more. At least the deals end the tired chirping about Ainge’s conservative approach to the trade deadline – as you may have heard, he hadn’t made a deal since swiping Isaiah Thomas from the Suns in 2015.

Still, some of the talk will be about what he didn’t do, and that’s understandable. There appeared  to be genuine hope that the Celtics could acquire Aaron Gordon from the Magic without having to part with Marcus Smart. But the Nuggets ruined that plan with a deal that included Gary Harris, rookie R.J. Hampton, and a first-round pick.

I’d be curious to hear what the Celtics’ last, best offer was, because Gordon, who is much more than a leaper now, would have been an excellent fit. The Celtics should have been willing to part with two first-round picks for a player like Gordon, a versatile defender and improving shooter and playmaker. Giving up Smart, as frustrating as his shot-selection – or failure to make open shots — can be, would be a non-starter. If and when this team figures it out this season, Smart’s effort and passion for winning will be among the reasons.

Before the deadline, I was on record as wanting the Celtics to hold on to Aaron Nesmith and Romeo Langford, the No. 14 overall picks in the past two drafts who have not yet found their rhythm as NBA players. Ainge thinks highly of Langford. And you can see it with Nesmith – the shooting skill, the effort that borders on recklessness – even if he’s still too often lost.

The best bet for this team in the near future is to let players like Langford, Nesmith and Payton Pritchard develop into complementary pieces alongside Jayson Tatum and Jaylen Brown, much like Robert Williams is doing right now. Giving them up for an established player who wouldn’t make much of a difference in the ultimate outcome of this season – this just isn’t their year, is it? – would have been counterproductive.

But giving up one of them, and a couple of first-rounders, for Gordon? That would been acceptable, and it’s a bit of a letdown that the Magic accepted another deal instead.

So Evan Fournier is in, and he’ll help. So too are Wagner and Luke Kornet, at least for now. Theis, Teague and Green are gone, as is a large chunk of the TPE.

As the dust settles on all of Ainge’s deals, the pieces on his underachieving team fit a little better. But it remains up to those who have been here all along to make sure this maddening season starts going better. 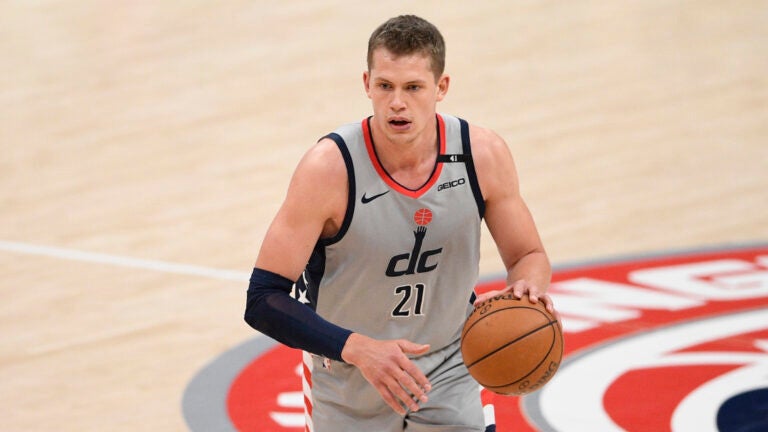