Evan Fournier has had a tornadic stretch since the Orlando Magic dealt him to the Boston Celtics for a pair of second-round picks.

On Thursday, Fournier was traded. On Friday, he flew to Boston. On Saturday, he joined the Celtics in Oklahoma City only to test positive for COVID-19. His subsequent COVID tests all came back negative, and he flew back to Boston for his debut — the Celtics’ first game in front of fans at TD Garden.

So Fournier can probably be excused for his scoreless 0-for-10 performance in his Celtics debut on Monday — a 115-109 loss to the New Orleans Pelicans.

At the very least, his teammates aren’t worried about it.

“It’s difficult, coming to a new team and just trying to play well, trying to remember all of the plays and new system,” Kemba Walker said. “It’s not easy. At the end of the day, come on now, we all know how good Evan is. He’s going to be great for us. I thought he had great looks, shots that we all know that he can make.

“He’s just getting adapted. He’s just adjusting. He’s definitely going to knock those shots down. Just give him some encouragement, just try to let him know not to think too much, just play the game. We believe in him. He’s going to be great for us.”

Before the game, Fournier was asked by reporters how he believes he can help the Celtics.

“I’m able to do a lot of things,” Fournier said. “I can handle, I can pass, you can bring me off screens and pin downs, so it’s really going to be about how can I fit with the other guys. I’m obviously learning the system and I’m going to try to be myself but obviously try to adapt to what guys are doing on the floor. We’ll see starting tonight.”

Monday, however, was an inauspicious start. Fournier’s first shot came on his first touch — a solid look as he curled into a 3-pointer. The shot hit the back rim. His next three shots did as well, including a half-court heave to end the first quarter.

From there, Fournier simply couldn’t find his range.  He air-balled a pair of shots, including an important one in the final three minutes as the Celtics tried to rally back.

In a season without many practices, Fournier — who was averaging a career-high 19.7 points per game when he left Orlando — might need a little while to get acclimated to the Celtics’ lineup, but Brad Stevens was as unconcerned as Walker about Fournier’s long-term fit.

“I just walked by his locker and said, ‘This is a small blip on your time here,'” Stevens said after the game. “Guy gets off the plane, he told you he flew to Oklahoma City, got off the plane, was told he was positive, then had to take a bunch of negative tests in a row. I think it’s been a tougher than normal trade for him but I know he’s not going to make that excuse. But I have no doubt Evan Fournier is going to score a lot of buckets for the Celtics. So very much a blip. Not worried about it.” 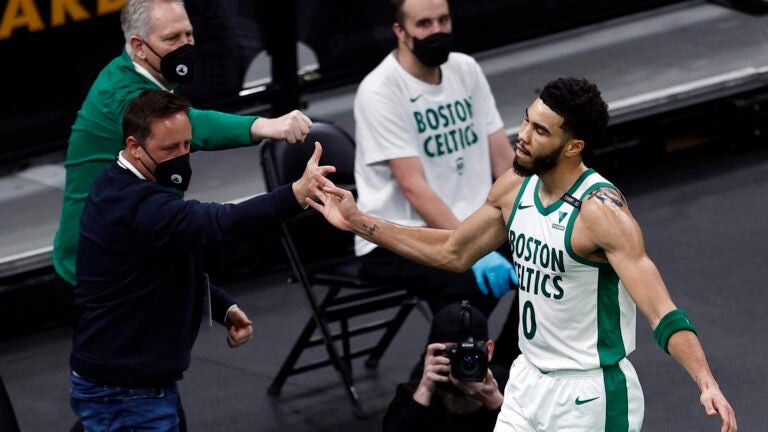