When Kendrick Perkins unleashed some harsh criticism on Jayson Tatum, the Celtics’ young star responded directly to him.

Following the Celtics’ win over the Trail Blazers Tuesday night, Perkins revealed that Tatum reached out to him after Perkins criticized Tatum’s body language during a loss to the 76ers earlier in April. In his conversation with Tatum, Perkins said he told Tatum how high he thinks the ceiling is for him.

The Celtics have won their last four games since Perkins called out Tatum, and Tatum’s been a big reason for that. He’s averaged 34.5 points per game in that stretch, including a 53-point game in a win over the Timberwolves, helping him receive Eastern Conference Player of the Week honors.

Perkins said he liked Tatum’s approach to his criticism.

“I appreciate Jayson Tatum because we didn’t have a conversation where it was beef,” Perkins said. “We had a conversation where he just wanted to understand where I was coming from and I got an understanding of how he felt about my comments. I had to let him know that I was not attacking him personally and that I am a huge fan of his. So, that’s how real people conversate and that’s how real professionals handle their business, the way that Jayson Tatum is doing – not getting all sensitive.”

Tatum did acknowledge some of the flak he’s received for his leadership after last Friday’s win over the Timberwolves.

“I know that I’m not the loudest and I don’t show much emotion. But anyone who has coached me and knows me knows I’ll go to war any day,” Tatum told reporters then.

Tatum’s latest achievement came Tuesday night, leading the Celtics to a 116-115 win over the Trail Blazers. He scored a game-high 32 points, and with 8.5 seconds left he made a 3-pointer to put Boston up by four. With the win, the Celtics moved up to the fifth spot in the Eastern Conference standings and will look to close out their West Coast trip with a win over the Lakers on Thursday. 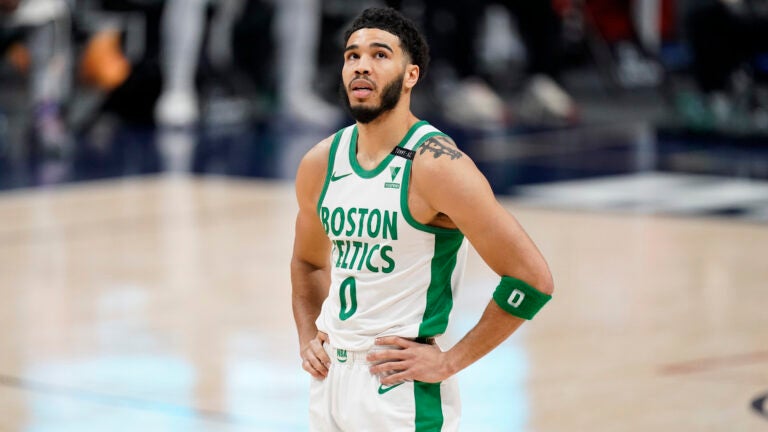