The Boston Celtics had nearly their full roster back on the floor Sunday afternoon, minus Robert Williams, but they were blown out by the Charlotte Hornets in an embarrassing 125-104 loss.

The Hornets were red hot to start the game, and the Celtics did little to cool them off the rest of the way. Charlotte finished 21-for-43 from 3-point range, and every time the Celtics trimmed the lead, the Hornets seemed to have an answer — the deficit never crept below six in the second half.

Miles Bridges’ buzzer-beating 3-pointer to end the third quarter — which was preceded by a bad turnover by Marcus Smart — was a major turning point, and the Celtics went ice cold in the fourth as the Hornets pulled away.

“I did think that when they started the next quarter up 16, that made it really tough once they scored those first four points,” Brad Stevens said. “So the bottom line is, that’s how fragile the game is when you’re having to swing for the fences a little bit because you’re on your heels the whole night.”

The Hornets played a complete game: Four players topped 20 points. Rozier gets the nod here for finally beating his old team and for hitting several big shots when the Celtics felt they were getting a bit of a foothold.

Games like Sunday are important if the Celtics hope to earn the fourth seed, or even if they hope to avoid the sixth seed and the Sixers, Nets, and Bucks triumvirate in the first round. They have one of the easiest schedules in the NBA going forward, and Charlotte was without both LaMelo Ball and Gordon Hayward.

The Celtics are now tied with the Miami Heat, who occupy the seventh seed in the East. The Celtics hold the tiebreaker, but if the Heat pass them, the Celtics will not only have to face one of the Bucks/Sixers/Nets, they will also have to get through a play-in game.

Jaylen Brown said the Celtics “absolutely” are trying to avoid the play-in game.

“To be honest, looking at the standings right now you don’t know where anybody’s going to end up,” Brown said. “One, two, and three are all close. Four, five, and six [are] right there, and seven, eight, nine, 10 all have to be play-in games, so we don’t know where things might end up. …

“But yes, to answer your question, we want to stay away from those play-in games.”

1. Usually, shooting numbers normalize over the course of a game, but that wasn’t the case on Sunday. The Celtics’ defense was abysmal early, and the Hornets pounded them from behind the 3-point line finishing 21-for-43 (48.8 percent). Miles Bridges, P.J. Washington, Terry Rozier, and Devonte’ Graham all buried four or more triples.

The Hornets finished with 40 assists, the most against the Celtics since a game against Sacramento in 1996. Their effective field-goal percentage (which factors in the additional value of 3-point shots) was 61.8 — the sixth-highest total against the Celtics this season.

The Celtics, meanwhile, finished 14-for-41 (34.1 percent) — seven fewer makes than Charlotte. No NBA team is likely to win a game when they spot the opposing team 21 points on 3-pointers.

“They just flat out beat us,” Kemba Walker said. “It’s very unacceptable. We’ve got to be better.”

2. Once again, turnovers were a major issue for Jayson Tatum, who finished with five — his fourth game in a row with four or more.

While Tatum has surged recently, opposing teams have keyed in on him defensively. Tatum’s first turnover was a catastrophically lazy pass back to Kemba Walker that Terry Rozier picked off for a layup early in the first quarter. His second was this drive, where every member of the Hornets had eyes on him as he attempted to beat Bismack Biyombo off the dribble. That additional attention complicates Tatum’s drives enormously. In this instance, Cody Martin slid over and took a charge — one of two charges Tatum committed on Sunday.

One of Tatum’s turnovers was a little less concerning: He saved a ball from going out of bounds but threw it directly to a Hornets player. Still, the Celtics need to figure out ways to help him when other teams key in, and Tatum needs to figure out how to avoid handing the ball over. That will be a major piece of his development.

3. Coaches often have to rely on players to be honest when asking for reviews, which isn’t always easy on either side — in the heat of the moment, nothing feels like a foul for players, and coaches don’t want to tell players they don’t believe them.

Still, on Sunday, Tristan Thompson adamantly called for a bad review in the third quarter after officials whistled Jaylen Brown for a foul. Stevens consulted, then called for the review. Brown, as it turned out, didn’t commit a foul on the play, so Stevens kept his timeout. However, Thompson committed a goaltending violation. The end result: The Celtics “won” the challenge, but Thompson’s insistence on a replay did cost the team two points.

4. The full duality of Marcus Smart was on display in the third quarter. The Celtics appeared dead in the water, and Smart led an impressive charge to get back in the game — a personal 10-2 run spanning just over a minute.

Then, as the third quarter wound down, the Celtics were gifted a 2-for-1 opportunity when Brad Wanamaker committed a bad foul that sent Kemba Walker to the line. Walker made 1-of-2, cutting the lead to nine. On the ensuing Celtics’ possession, Smart got his arm wrapped up and tried to elevate and draw a foul, but the officials didn’t make a call and he instead turned the ball over. On the other end, Miles Bridges buried a 40-footer that pushed Charlotte’s lead back to 12.

In the final score, the six-point swing didn’t really matter. The Celtics, however, never recovered.

5. Kemba Walker left the game in the first half holding his hip after a close-out. Given that there was no contact on the play, the moment appeared to be concerning, but Walker returned shortly afterward and finished with a team-high 20 points on 7-for-17 shooting.

“I’m fine right now. Yeah, I’m still hurting a little bit, to be honest. But I guess I’ll get better information tomorrow, I guess, about how I feel when I wake up.” 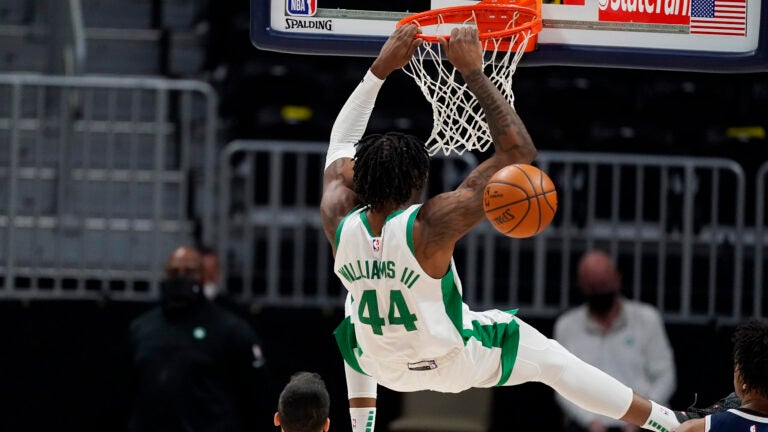 Brad Stevens thinks Robert Williams is getting better, but not ready vs. Hornets