Moving up and down the dial while realizing that Carl Yastrzemski’s stint as a Ch. 7 sports reporter is one more thing that lasted longer than the Super League …

With play-by-play voice Mike Gorman having the night off, Ainge, the Celtics’ president of basketball operations, joined Brian Scalabrine on the broadcast. Ainge knows what he’s doing on television — he was a TNT analyst before taking his job with the Celtics, and actually filled in on a Celtics broadcast eight years ago when Tommy Heinsohn stopped traveling.

It was compelling to hear Ainge talk candidly about what the players were doing right and what they weren’t in a frustrating loss to a subpar Bulls team. (His fondness for Romeo Langford also seemed to be confirmed by his constant referrals to him as “Romey.”) But it would have worked better with a traditional play-by-play voice, either on a night Gorman was behind the mic or with an experienced fill-in. Scalabrine, usually the color analyst, was game in attempting to be the lead voice, but he had too much to navigate.

The concept seemed to be to have Ainge and Scalabrine talk casually about both the big picture and the small — the state of the team, but also what was unfolding in real time on the court. Take advantage of having the boss on for a couple of hours. But Scalabrine got too caught up in trying to do the play-by-play when a more minimalist approach — telling us who scored, complimenting a subtle defensive play, that sort of thing — would have been better.

He also had the added difficulty of engaging Ainge, who was limited on what he could say — commenting on Bulls players could have been construed as tampering — and also was sitting in a different part of TD Garden.

One reader suggested having Scalabrine do the play-by-play was “a total dereliction of responsibility to the audience.” I wouldn’t go that far — the degree of difficulty was steep — but it is clear NBC Sports Boston needs someone capable of handling play-by-play on its roster.

Earlier in April, Sports Illustrated NBA writer Chris Mannix filled in for Gorman. Mannix is excellent on sports radio and podcasts, but that’s far different than calling play-by-play for 2½ hours. Sean Grande came over from the radio side for the game following that, but he can’t always be asked to save the day when Gorman is out.

Last year, Kyle Draper filled in. He’s now calling games for the Sacramento Kings. There are plenty of capable play-by-play voices looking for a break that would be glad to substitute once in a while. I suppose NBC Sports Boston could be given some credit for trying to do something different. But the execution really didn’t have much of a chance of working with Scalabrine as the de facto play-by-play voice.

The most interesting moment actually came at the end. Ainge got his headset off faster than he got his finger out of Tree Rollins’s mouth all those years ago.

“Did you at least have fun?” asked Scalabrine.

Scalabrine: “At least we had a chance to catch up.”

Ainge: “We could go to lunch to do that. This was not fun.”

If that Yaz reference leading off this piece confused you, well, it’s not the first and won’t be the last time I’ll do that to you.

His brief post-retirement stint as a sports reporter at Ch. 7 came up this past week during an exercise in Twitter crowd sourcing in which I posed this question: Who is someone that was in the Boston sports media market for a very short amount of time?

Crowdsourcing: Who is someone that was in the Boston sports media market for a very short amount of time?

The most votes, however, went to a couple of outside-the-market hires who didn’t last long on WEEI: Mike Salk and Tim Benz. Fun topic, and it makes one appreciate those who have had staying power.

The No. 1 pick on my theoretical draft board of NFL experts? ESPN’s Louis Riddick, who built instant credibility when he was the rare voice who was all-in on Patrick Mahomes before the 2017 NFL Draft. Riddick’s insight on the player attributes that appeal to the Patriots is also always valuable . . . No, there’s nothing brewing in the stalemate between YouTube TV and NESN. Also worth noting: The Nielsen Ratings you will see regarding NESN have nothing to do with the YouTube TV situation. Those are strictly for cable television, not streaming. If anything, the YouTube TV situation may have driven more Red Sox and Bruins fans back to cable . . . Bob Lobel and Susan Wornick will host Bay Cove’s 2021 Saving Lives Virtual Gala on May 6. The event will feature a conversation with NESN Red Sox analyst Dennis Eckersley. Bay Cove provides services for people facing challenges associated with developmental disabilities, mental illness, homelessness, aging-related needs, and drug and alcohol addiction. Further information on the fund-raiser is available at baycovehumanservices.org. 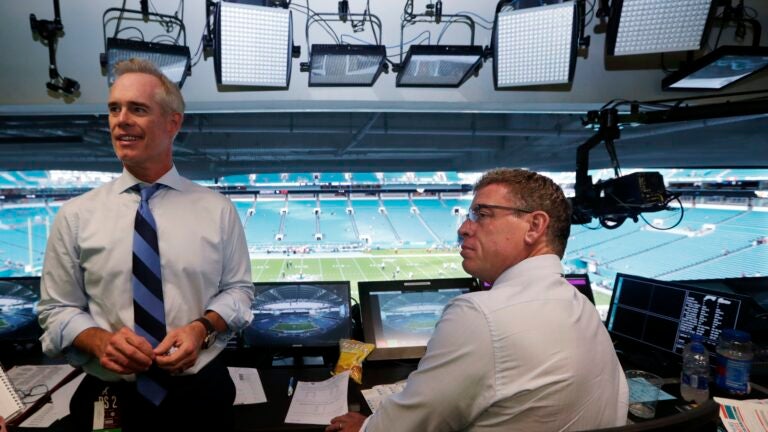