The veteran and team leader missed significant time this year due to injury, has struggled to maintain his usual form on the court, and now will miss yet another game after the NBA suspended him a game for “directing threatening language” toward officials after Tuesday’s disappointing loss to the Oklahoma City Thunder.

Celtics president of basketball operations Danny Ainge lamented that Smart’s actions cost him more time on the court in a season filled with absences and inconsistency in Boston’s lineup in an interview on 98.5 The Sports Hub Thursday morning.

But as he has done for much of the season, Ainge went to bat for Smart amid criticism of both his behavior and his performance this season.

“Marcus has grown a lot,” Ainge told the Toucher and Rich Show. “He’s been fantastic these last few weeks actually, showing some leadership. I’m not going to make a bigger deal out of this than it is.”

The Celtics executive acknowledged Smart should not have pursued his frustrations with the officials after the game — “You can’t do that.” But he also said Smart was justified in being upset over some calls that happened in the game and that he wasn’t sure the suspension was warranted.

Ainge also pushed back on the idea that Smart has regressed this season, saying he’s gone through “ups and downs” like most players on the team this year. “Marcus has been huge for us,” he said. “He’s the heart and soul of our team…I don’t think he’s regressed other than the regression that’s happened from his health and injuries.”

Ainge admitted seemingly the entire team went through a “down” moment in a disappointing Tuesday loss to the Oklahoma City Thunder, one of the worst teams in the Western Conference.

One of the players struggling the most to get on track is recent trade deadline addition Evan Fournier, who has missed several games due to COVID-19 and hasn’t scored up to his capability when on the court.

But as with Smart, Ainge said he’s counting on Fournier to find his way in time.

“Evan’s not himself right now,” Ainge said, noting he’s still battling with the after-effects of the virus. “He need him to be as good a team as we can be.” 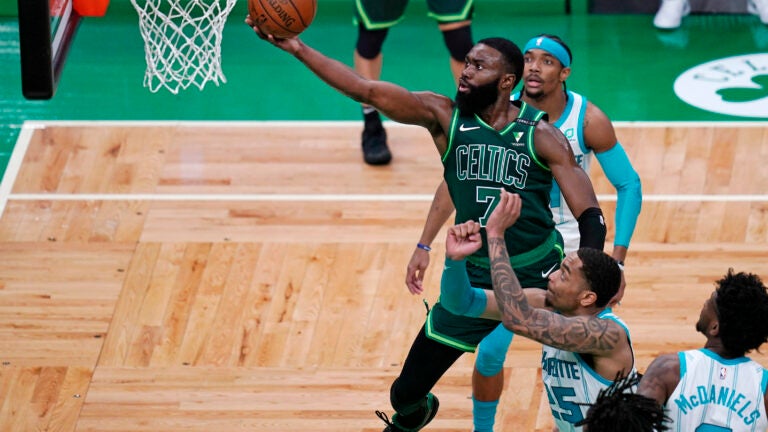 5 takeaways as Jaylen Brown, Jayson Tatum combine for 73 in Celtics’ win over Hornets