Mike Gorman has seen just about everything throughout his broadcasting career, but Friday night was a new one for even him.

The Celtics, fueled by Jayson Tatum’s Herculean 60-point effort, rallied from a 32-point deficit to stun the San Antonio Spurs, 143-140 in overtime, at TD Garden. According to NBA.com, the comeback was the second largest in the NBA over the past 20 seasons.

Tatum finished 20-of-37 from the field, 5-of-7 from downtown, and 15-of-17 from the line, tying Larry Bird for the most points in a game in Celtics history. Bird’s numbers were nearly identical that game in 1985, as he shot 22-of-36 from the floor and 15-of-16 from the line. Tatum said it’s a “surreal feeling” to be in such stellar company.

Gorman, who has announced over 3,000 games, called Friday’s shocker one of the top five he’s ever done. Tatum’s performance left him in awe and amazed by his ability to take over the game.

“Just 23 and he finds himself next to Larry Bird in the Celtic’s record books… and if you saw him with his son on the court postgame you know the Celtics have something very special in Jason Tatum #areyoukiddingme.”

His son, Deuce, was clearly excited to celebrate his dad’s historic performance. Tatum became the second-youngest player in NBA history to score 60 points, and the first player in at least 40 years to drop 60, not turn the ball over at all, and register five-plus assists.

Deuce got in on the celebration after Dad dropped 60 ☘️👏

Gorman has consistently praised Tatum over the years, but he said earlier this week that he doesn’t think Tatum and Jaylen Brown can be the Celtics’ leaders going forward at this point in their careers.

“I think we need someone right now who is 28-30, who has been around the league,” Gorman said on 98.5 with Toucher and Rich. “I thought Kemba [Walker] might be that guy, but he’s just been constantly plagued with injuries.”

The Celtics were down 32 points to the Spurs and Jayson Tatum went dumb!!! I mean he got DEEP into his bag tonight and put on a SPECIAL performance on the offense end dropping a 60 piece wing dinner Cajun Rub style Extra Spicy! God Bless America!!!

He clarified that Tatum and Brown aren’t “out of control,” but the Celtics simply need someone who can guide the players around them and show the younger guys the way.

Tatum, perhaps ever-so-slightly inspired by the comments, willed the Celtics back from a seemingly insurmountable deficit to avoid what appeared destined to be yet another disheartening loss.

“That boy is destined for greatness,” Brown said of Tatum. 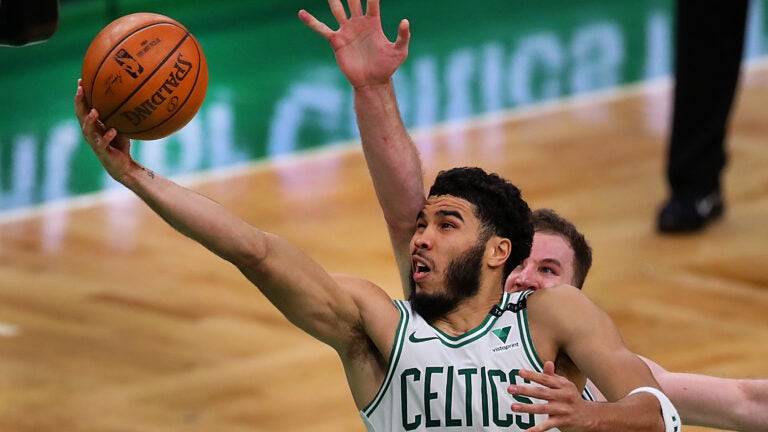