Even with the acknowledgement that so many circumstances have conspired against them, it’s fair to say the Celtics have played as a team far too fleetingly this season. So it seems fitting, as the regular season winds down and we’ll find out if they have the fight to avoid the play-in round, to take a moment to assess them as individuals:

Anyone that even entertains the contrived sports radio topic of trading an ascending, hard-working 23-year-old averaging 26.5 points, 7.4 rebounds, and 4.4 assists per game should immediately be relegated to an eternity of watching Dwight Howard mug for the camera. Players like Tatum are a rare blessing, but too many among us are impatient with the growing pains. And they are real. Too often Tatum’s solution to Celtics’ offensive struggles is to play isolation ball, and when he’s jacking up step-back 3s with 14 seconds left on the shot clock, the My Turn mindset infects the rest of the team. The most appealing aspect of his 60-point game is that he got there by attacking the basket, over and over again. Go ahead and call him The Problem, if you dig that nickname. Just remember he is the solution.

The Celtics’ hope has been that their caution with his creaky knee, including keeping him out of back-to-backs, will pay off with good health and high performance in the playoffs. Maybe they’re right, but it seems that yo-yoing him in and out of the lineup has been a bigger contributor to their inconsistency than just about anything else. When a player who averages 15 shots per game is there one night and out the next, it’s pretty much impossible to build any consistency, beyond all of the other factors that have left Brad Stevens with player availability issues. To his credit, Walker does seem to be making a conscious effort to play selflessly. He’s taking fewer shots per 36 minutes than he has in any season since 2015-16.

Because Tatum is the purer scorer, Brown tends to get treated as his sidekick. But he’s been the Celtics’ best player this year, and it’s not really close. He’s averaging career-highs in points per game (24.7), assists (3.4), steals (1.2), field goal percentage (48.4), and 3-point percentage (39.7) while also grabbing six rebounds per game. He’s also their most versatile and conscientious defender. While we wait to find out about his condition after colliding with Tatum late in the loss to the Blazers, let me also note that I suspect we’re going to find out at season’s end that he played through multiple injuries this season.

Seven years into his career, he’s a bigger enigma than ever. He’s submitting career highs in points (13.5 per game) and assists (5.7), and he’s the best decision-maker on the roster when passing the ball. And then: his defense has regressed (perhaps due to injury), his confidence in his shot remains irrational, and his Knuckleheaded Antics Ratio seems to have increased when you’d hope he’d have grown out of that nonsense. One game, he dishes out 12 assists and makes wise decision after wise decision in the comeback against the Spurs. In the next, he gets tossed out in crunch time for socking a Blazers player in the place where no man should be socked. I do think his fans (of which I am one) are more willing to admit his flaws than his detractors are to admit his strengths.

The NBA’s all-time leader in field goal percentage is DeAndre Jordan at 67.4 percent. The minimum to qualify is 2,000 made buckets. TimeLord’s field goal percentage three seasons into his career is 71.8 percent – but he’s made just 280 shots so far, so he’s a several hundred dunks away from qualifying. I think that illustrates how little we’ve seen of him in his three-year career. He’s been a pleasure to watch this season – he’s averaging 15.3 points. 13.4 rebounds, 3.4 blocks and 3.4 assists per 36 minutes, and is playing with consistent high effort. I just wish he had another four years on his rookie contract – he’s already a restricted free agent after next season.

If you’re among those still tempted to shrug off the effects of Covid-19 on professional athletes, I hope Fournier’s words Sunday night opened your eyes. He described how the aftermath felt like the symptoms of a concussion, that bright lights bothered him and his vision was still blurry. Even after an 8 for 10 shooting night, he talked about how his depth perception is still off. In some ways, he epitomizes the disjointedness of this Celtics season. He struggled initially after coming over from Orlando, got hot (he went 11 of 16 from 3 in his third and fourth Celtics games) and looked like the missing piece, missed the next nine games after contracting COVID, and is still fighting to find himself.

Pretty much as advertised, for better or worse. He’s a reliable defender and an outstanding rebounder – if his average of 2.5 offensive rebounds per game holds up, he’ll tie 1983-84 Kevin McHale for 10th-best in franchise history since the league began recognizing the stat in 1973-74. (I imagine Bill Russell would own the entire top 10 if the stat had been tracked then.) I do wish Thompson would pack up that little baby half-hook and ship it back to Cleveland, never to be seen in these parts again.

My favorite player to watch on this team this season has been Williams. Over the last two weeks, this kid has usurped him. One of the best things about following sports is when a young player finds his confidence, his game follows. In his last three games, he’s averaging 15.7 points, 6.3 rebounds, and approximately 4.6 crazy hustle plays per game. He’s now shooting 43.8 percent from 3 on the season. Considering he played just 14 games as a sophomore at Vanderbilt and had no summer ball to adjust to the NBA, it’s clear his learning capacity is immense. Danny Ainge got this pick right, and if you wanted to trade him at the deadline, I see you.

He can get a little overwhelmed on defense, but really, that’s nitpicking. There’s so much to like. Here’s one thing: The only rookie who has also played more than 1,000 minutes this season and shoots a higher percentage on 3-pointers than Pritchard is Memphis’s Desmond Bane. Pritchard is hitting 41.7 percent of his 3s, and I’m at the point where any time he tees up an open one, I’m assuming it’s going in.

Love the defense. Like the silky ability to get to the rim. Cringe at the perimeter shot. Scowl when he jogs back on defense like he’s already accomplished something. He needs reps, health and maturity, but he can play.

He reminds me a little of Rasheed Wallace in 2010, with a crafty rec-league offensive game and a gigantic bull’s-eye on his back defensively. Sheed was 35 then. Parker is just 26, but there are former ABA players with healthier knees. Scars don’t lie, I guess.

He makes too many what-is-he-thinking? mistakes for such a smart person, but he’s also noticeably improved in one area. After missing his first 25 3-point attempts as a rookie last season, he’s made 82 of 212 since, good for 38.7 percent.

Talk about well-timed hot streaks. In his first two games with the Celtics after coming over in the Daniel Theis trade, he hit 4 of 7 3-pointers. In the 10 games he’s played since, he’s gone 3 of 17 (17.6 percent). Moe Wagner was brutal here, but the Celtics cut the better player.

He’s had a couple of helpful moments lately, including dishing out six assists in the April 28 win over the Hornets. For a player on a two-way deal trying to stick as a point guard, his shot selection too often suggests he thinks he’s an honorary member of the Curry family.

He’s a shoot-first, -second, and -third player who has hit 30.3 percent from 3-point territory in his NBA career. There’s hope for him to find a niche — Eddie House shot 30 percent from 3 in his third NBA season. But am I wrong , or does it seem like Edwards’s getting-mine approach makes him less than enjoyable to play with?

Because his fellow garbage time performers went out of their way to feed him last year, his Per 36 minutes stats (25.1 points, 16.4 rebounds) were hilarious. They’re down some this season (14.4 points, 13.7 rebounds), but I think that’s more an indicator that he’s treated like just another player now rather than as a sideshow. He’s improved – his turnovers are down from 3.3 per 36 to 1.4) — and he remains a project worth the investment. 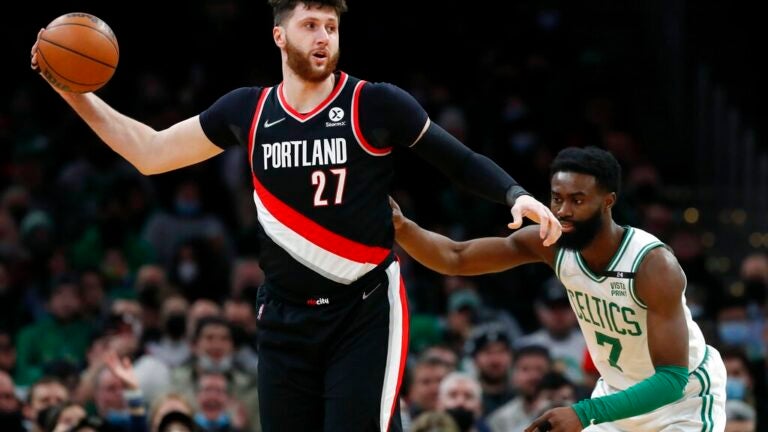