The Boston Celtics roared past the short-handed Orlando Magic on Wednesday, claiming a 132-96 victory.

The Celtics roared to a big lead early and never looked back. Orlando closed the gap in the second quarter as the Celtics’ second unit frittered away the offensive gains earned in the first, but the starters quickly re-established control when they returned and pushed the lead back to double-digits.

The Magic — who only had nine players available — never mounted any sort of serious challenge in the second half, and the Celtics drew even with the Heat in the standings.

Evan Fournier, who returned to Orlando for the first time since he was traded, was asked about playing against old friends and coaches.

“I’ll always have a good time playing against [Magic coach] Steve [Clifford] and those guys,” Fournier said. “So I’m glad we got the win, and I’m glad we won by 30.”

Walker returned after a four-game absence and put together another impressive performance. Walker is averaging 24.6 points in his last six games and seems to be hitting his stride as the playoffs approach (assuming he can stay healthy).

“Obviously his injuries are no fun, but you can tell the guys that have had time off their legs because you can see the different bursts they have,” Brad Stevens said. “He was great tonight.”

On Tuesday, Brad Stevens said the playoffs have already begun for the Celtics as they look to avoid the play-in game. With a blowout win over the undermanned, lottery-bound Magic, the Celtics looked like a team that recognizes their precarious situation.

1. Jayson Tatum was having a mediocre game for two-and-a-half quarters, but he took over in the third — pouring in 11 of his 27 points in the final 4:30 of the period. That stretch pushed the Celtics’ advantage from 16 to 25.

The impetus seemed to be Mo Bamba, who talked a little trash after he swatted one of Tatum’s layups and drew a technical. The tech was undeniably soft — Bamba could be seen mouthing “Give me that s—,” which is pretty standard chatter — but Tatum knocked down the free throw and it seemed to get him going.

2. Evan Fournier looked significantly more comfortable and might be starting to get his legs back after a tough battle with COVID. He finished with 18 points on 8-for-14 shooting and went 2-for-5 from 3-point range. The Celtics created opportunities for him out of the pick-and-roll, and Fournier showed some of the creation off the bounce that has Celtics coaches and fans so intrigued by his potential with this group.

“My number one priority in life right now is feeling better,” Fournier said. “So of course once I feel better, I’m very motivated to show everyone what I can do and how I can help this team. But I think with time, I’m going to feel better and better.

“As far as motivation, I don’t need extra motivation. I’m a very dedicated guy. I give 100 percent in everything I do, and I’ll show you guys how hungry I am to play well for the team.”

3. The Celtics’ second unit gave the Magic a chance in the second quarter, as former Celtic Mo Wagner got hot from 3-point range. Until the starters returned, the offense broke down and devolved into mediocre looks from behind the arc with minimal ball movement.

Several players who have been largely out of the rotation over the last week or two got a chance to play, but they didn’t make a strong case for themselves to reclaim minutes.

4. That said, the Celtics’ playoff rotation — assuming full health, which is a huge assumption — is clarifying nicely. As we wrote yesterday, Aaron Nesmith seems to have solidified his spot. Payton Pritchard continues to shine from deep and will get minutes. Fournier will probably come off the bench. Tristan Thompson will back up Rob Williams.

In addition to the starters, that’s nine players — a generous playoff rotation. Other players can be utilized in various matchups, but the Celtics finally seem to have found a look that largely works. How that group looks when (and if) they get a chance to share the court will be a fascinating subplot of the postseason.

5. Tacko Fall got a big ovation when he entered the game, presumably both from Celtics fans and from UCF fans in attendance.

“That was a great move,” Kemba Walker said. “I mean, he hit him with a little move outside, got in the paint, up and under. It was super smooth. He works on that stuff all the time, so it was good to see him do it in a game.”

Whenever he gets a chance to play, Fall always seems to find his way onto the highlight reel. 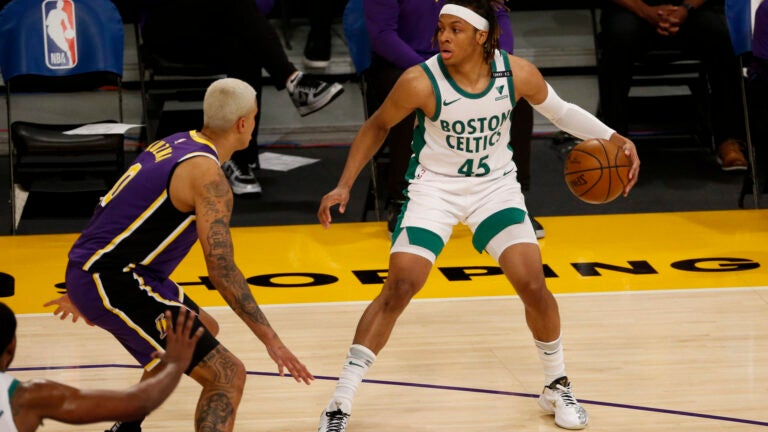